It's like I said before, in lieu of providing proof of their arguments in court cases (such as the recent marriage equality victories in Pennsylvania and Oregon), anti-gay organization leaders such as Family Research Council president Tony Perkins are whining about "activists judges."

What I didn't count on is how folks like Perkins would take the visage of dotty old men shaking their fists at the sun while talking about open rebellion against the courts:

Like a dozen black-robed activists before him, Judge Michael McShane argued, "Because Oregon's marriage laws discriminate on the basis of sexual orientation without a rational relationship to any legitimate government interest, the laws violate the Equal Protection Clause of the Fourteenth Amendment to the United States Constitution." The state's failure to defend its own constitution, and the failure of an openly homosexual judge to recuse himself, demonstrate what an overreach this decision was. The deluge of rulings hit Pennsylvania next, where Judge John Jones wrote one of the harshest opinions yet, insisting that laws affirming natural marriage should be discarded "into the ash heap of history."

While both judges cited the Supreme Court's June decisions as a rational basis to destroy marriage, the high court said nothing that would give a federal judge the right to redefine marriage. In an interesting twist, both rulings came down within hours of Politico's new polling -- which showed that a clear majority of likely voters in swing states (52-48%) are digging in on their support of natural marriage.

Obviously, the Left's strategy of forcing this agenda through the courts is backfiring -- and it's only a matter of time before the country begins to discard the opinions of unelected judges on the same ash heap where Jones tried to send marriage. Just as the country has never accepted the Supreme Court's declaration of a "right" to destroy unborn human life in Roe v. Wade, we will never accept the Court's assertion of a "right" to change the definition of our most fundamental social institution. The courts can ignore natural law, or even suppress it, but they will never succeed in subduing it.

So according to Perkins, based on a poll which has nothing to do with marriage equality, court rulings are backfiring. In addition,  states should ignore the opinions of judges because they aren't elected anyway. 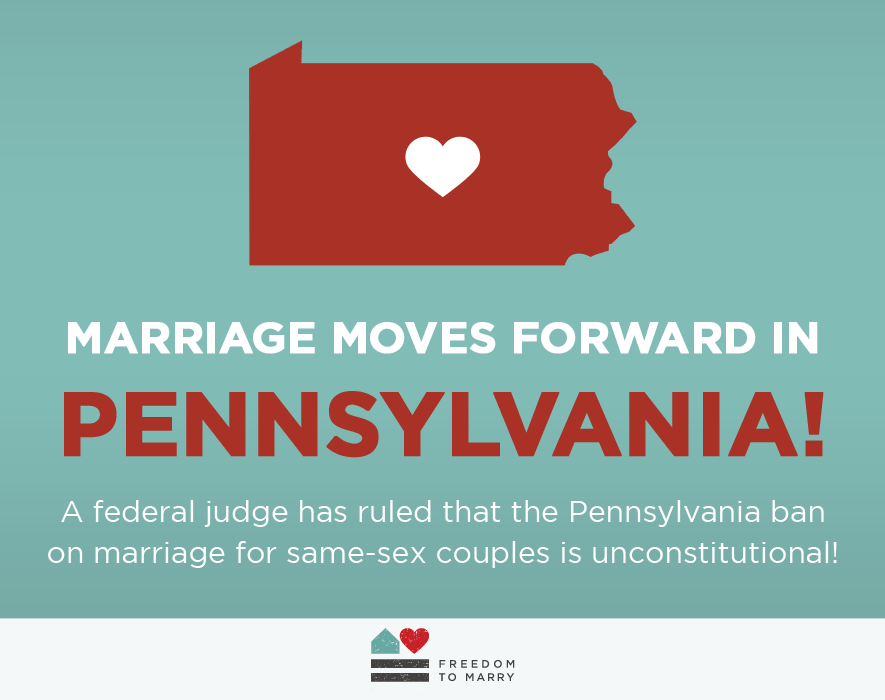 In the second victory in as many days for the lgbt community, a federal judge has struck down Pennsylvania's ban on gay marriage, making it the 19th state in which lgbts have won the right to marry.

This underlines the fact that there is a trend going on here. We now have control of the tsunami unleashed against us in 2004 by the Republican party which was used to reelect President Bush.

But in the midst of all of this good news, one thing worries me. Will the truth be told?

With Fox News giving anti-gay groups carte blanche to spin their message and countless conservative blogs and false news groups out there, I cringe at the thought that these entities working together will obscure the truth behind our victories.

And that truth is anti-gay groups are trapped in the 30-year apparatus they created to demonize the lgbt community. All of the lies, junk science, cherry-picked science, and anecdotes they have used against us is collapsing on them. They can scare folks to vote against marriage equality but they can't use that crap in court because they would have to admit that its all a lie.

Or to put it another way, remember the words of Marc Mutty, during Question One, a documentary about how NOM aided in defeating marriage equality in Maine in 2009. At the time, Mutty led the campaign:

We use a lot of hyperbole and I think that's always dangerous," says Mutty during a Yes on 1 strategy session, at the time on leave from his job as public affairs director for the Roman Catholic Diocese of Maine.

"You know, we say things like 'Teachers will be forced to (teach same-sex marriage in schools)!' " he continues. "Well, that's not a completely accurate statement and we all know it isn't, you know?"

"No," interjects a woman off-camera. "We don't say that."

"Let's look back at our ads and see what we say," Mutty persists. "And I think we use hyperbole to the point where, you know, it's like 'Geez!'


The question is should lgbt victories continue to pile up with regards to marriage equality, will the media even touch this angle. Or will they just hand off the microphone to anti-gay groups and allow them to falsely represent Christianity and spin lies?

Posted by BlackTsunami at 3:08 PM No comments:

This is not meant to be gloating but I would get drummed out of the UHA (United Homosexuals of America) if I didn't bring this up. In light of our recent marriage equality victories, Jeremy Hooper of Goodasyou.org reminds us of something former NOM head Maggie Gallagher said a few years ago:

Utah told to accept gay marriages - More good news from Utah as we await final news on marriage equality there. These involve the marriages which took place before the emergency stay.

How Fox News Is Helping Homophobes Hijack Christianity - Yep. That's Fox News with its one-sided junk.. On a side note, I don't see how any person freely brags that she would urinate on corpses (hi there, Dana Loesch) can be any type of defender of Christianity. Except of course on Fox News.

Media Outlets Should Cover This Historic HIV/AIDS Development - But they probably won't. And that is the problem with today's overpaid media.

Janet Mefferd Praises Matt Barber For Getting Christian Publisher Booted From NRB - In which we find out what the religious right actually thinks of their jaded phrase "religious liberty."
Posted by BlackTsunami at 9:01 AM 1 comment: