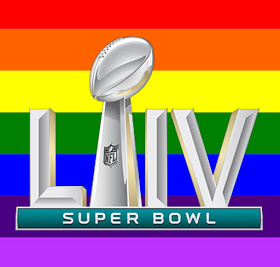 Republicans scrap child marriage ban because they’re worried about a pro-LGBTQ proposal - We spook them that much.

Jersey City Muslim and Coptic Christian parents angry over state-mandated LGBT curriculum - Just a matter of people assuming that their lives and their families are the only ones which matter. They claim they have no problem with LGBTQs, but then they throw words around like "indoctrination."

I personally think that after the many times he has defended or made excuses for Trump's behavior, Franklin Graham has lost all privileges to condemn so-called lascivious behavior.

But apparently irony is lost on him:


This exhibition was Pepsi showing young girls that sexual exploitation of women is okay. With the exploitation of women on the rise worldwide, instead of lowering the standard, we as a society should be raising it. I’m disappointed in @Pepsi and the @NFL.
— Franklin Graham (@Franklin_Graham) February 3, 2020 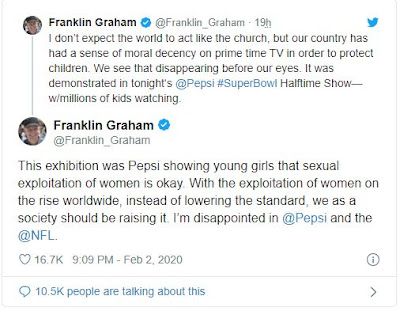 I didn't watch the Superbowl halftime show put on by Jennifer Lopez and Shakira. But I am disgustingly familiar with  Franklin's opportunistic outrage. Don't get me wrong because I think it's good that he's shining a spotlight on the exploitation of women. Of course it doesn't help matters when one realizes that he supports a president who has been accused by 25 (make that 26) women of sexual misconduct, including rape. And it equally doesn't help matters that he has bent over backwards to either make excuses for Trump's awful behavior or told out-and-out lies while defending him.

And then there's the abnormally loving praise he has heaped on Trump as a so-called defender of Christianity: 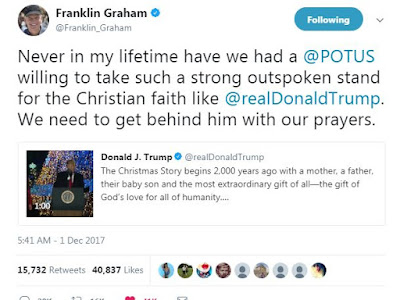 Graham seems to have forgotten that moral decency belongs in the White House as much as he thinks it belongs on prime time television.
Posted by BlackTsunami at 3:36 PM No comments: