From People for the American Way's Right-Wing Watch:

The following are the list of speakers, some of which are a cornucopia of anti-gay voices: 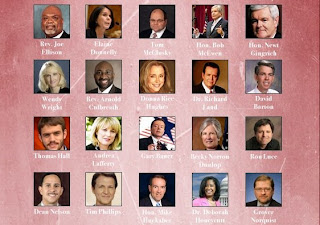 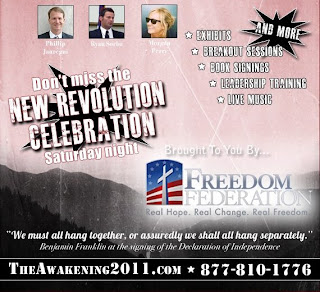 I see that Mike Huckabee, Sen. Marc Rubio, and Reps. Mike Pence, Allen West and Michelle Bachmann are going to be at the conference and thus will be hobnobbing with members of the Family Research Council (Tony Perkins), the Traditional Values Coalition (Andrea Lafferty), and Concerned Women for America (Wendy Wright). FRC and TVC were declared anti-gay hate groups according to the Southern Poverty Law Center, while CWA was profiled for its anti-gay animus.

One has to wonder what the panel discussions at the conference will be this year. Last year, Lafferty and the Liberty Counsel's Matt Barber led a panel discussion on the so-called dangers of homosexuality. It was during this discussion that Lafferty made the absurd claim that pro-gay nondiscrimination laws will lead to the molestation of crippled war veterans.

No doubt, Huckabee and company will probably still attend this conference even after told about these organizations and no doubt they will give a false explanation of why they will mingle with anti-gay groups if asked - something along the line of "it's unfair that these groups are being called hateful simply because their religious beliefs."

But the fact that these folks will attend a conference with anti-gay hate groups is good to know, especially in light of the knowledge that Huckabee, Pence, and Bachmann are possible Presidential candidates.  All the more reason that they become three people who have no place residing at 1600 Pennsylvania Ave.

Should children be told about transgender people? and other Monday midday news briefs

Gay intern credited with saving US congresswoman - In case you haven't heard about this story, READ IT!

At least one 'Economist' agrees: Maggie should start stashing away some of her gay marriage profit - Those who are against marriage equality lose again, this time in a fair debate.

Vote for Pro-LGBT Miss America Contestant! - The anti-Carrie Prejean. I hope she don't have any pictures out there.

Should We Introduce Children to the Concept of Transgender People? - Why isn't this a good idea. I'm all for it. I was a child when I learned a little about the transgender community and it didn't damage me.

Even after tragedy, religious right still provoking the anger

I was going to write about something else this morning, something a bit more positive after Saturday's tragedy in Arizona.

But something caught my eye during my morning read:

A healthcare expert says he's appalled at how the Obama administration tried to hide a Medicare regulation that would have had the government pay doctors to advise patients on end-of-life options during their annual visits.

Medicare coverage for voluntary end-of-life planning was put in the original House version of ObamaCare by Representative Earl Blumenauer (D-Oregon), but was dropped after Sarah Palin and other Republicans raised the specter of "death panels" deciding the fate of vulnerable seniors. But the end-of-life counseling surfaced again right before Christmas in a Medicare regulation, nearly going unnoticed.

. . . "They try to keep things secret, hidden in the dark -- things that they know are obnoxious and repellent to many people," he laments. "And we've just got to keep on top of this because they're going to try and sneak it in again in the weeks and months to come."

That piece of repugnance is from the American Family Association's One News Now, a supposed Christian news service. The article is talking about - and giving an ugly slanted version - of the Obama Administration's decision to add a provision to Medicare regulations. From the New York Times:

Under the new policy, outlined in a Medicare regulation, the government will pay doctors who advise patients on options for end-of-life care, which may include advance directives to forgo aggressive life-sustaining treatment.


Under the rule, doctors can provide information to patients on how to prepare an “advance directive,” stating how aggressively they wish to be treated if they are so sick that they cannot make health care decisions for themselves.

The reason why it was kept quiet because it was that provision which started a lot of controversy against the health care bill when Sarah Palin claimed that it would lead to "death panels" deciding who gets to live and who has to die. It was an ugly lie which received the PolitiFact Lie of the Year. It was also one of the main reason why there was so much unbridled anger during the health care town halls meetings in 2009.  :

I might also point out that One News Now doesn't even mention Arizona's tragedy in its news. But it does have the following items:

One would think that this supposed Christian publication would have something about Arizona's tragedy and at least a word from a religious leader talking about how we can rely on our faith in God to get us through.

Instead, One News Now chose to peddle in more anger and more lies.

Posted by BlackTsunami at 5:50 AM No comments: