Far be it from me to cover a celebrity feud on this blog, but this one is choice. It involves a certain Trump supporter who tried to call out an incredibly talented black queen. And got more smoke than he could handle.

Last week, Joe Biden made an absolutely stupid comment on a radio show about black people voting for either him or Donald Trump. The blowback was vicious and understandable. He apologized for what seemed like a stupid attempt to make a joke. However, Trump supporters, desperate for any advantage to combat the Orange Menace's crashing poll numbers, got on Twitter decrying Biden. The vast majority recognized the cries of outrage as pathetic and hypocritical. However, one Trump supporter thought he would go the extra mile.

Scott Baio, famous for portray Chachi in 'Happy Days' a long time ago, decided to go after openly gay comedian Wanda Sykes after she defended Biden: 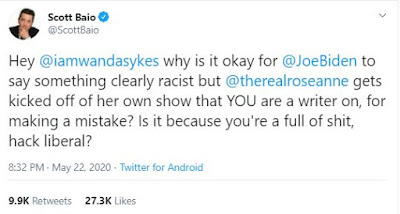 Baio was referring to the incident in 2018 which saw comedian Roseanne getting fired from her own show after making racist comments about former White House aide Valerie Jarrett. Sykes apparently didn't see Baio's comment until days later. But when she did,  one can easily say she got the final word: 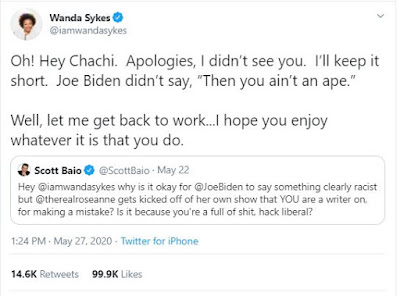 I don't think that Baio commented back. I'd say he was too busy picking his face up off the floor and attempting to glue together the cracked pieces.
Posted by BlackTsunami at 4:40 PM No comments:


Whether or not you liked him or disliked him, you simply have to give Larry Kramer his props. LGBTQ people - and the world in general - are in a much better place because of him.

Celebrities mourn Larry Kramer: His ‘rage helped lift us out of invisibility’

Hollywood & Broadway Remember Larry Kramer: Says Elton John, “We Have Lost A Giant Of A Man”

Someone keeps destroying a beach town’s rainbow crosswalk so the city keeps repainting it - We can hold out just as long as the vandal.

Texas lawmakers to push LGBTQ anti-discrimination bill next session - This promises to be interesting.
Posted by BlackTsunami at 9:14 AM 1 comment: