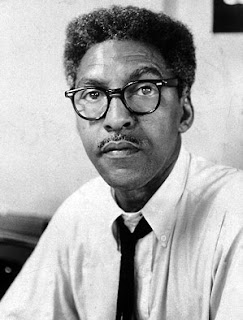 From the National Black Justice Coalition:

Saturday, March 17, 2012, will mark the 100th birthday of the late civil rights activist Bayard Rustin. Rustin was a proud Black gay man who was an indispensable architect of the Civil Rights Movement. His most noteworthy achievements include serving as chief organizer of the historic 1963 March on Washington for Jobs and Freedom, mentoring the late Dr. Martin Luther King, Jr., and helping to form the Southern Christian Leadership Conference (SCLC). As an effective bridge builder across a broad range of demographics, he spent more than 60 years involved in social, racial, economic, class, labor, anti-war and other justice movements, both domestically and internationally.

However, the story of this visionary strategist and activist, who dared to live as an openly gay man during the violently homophobic 1940s, 50s, and 60s, has rarely been told in mainstream or Black media.

“Every year, during the Martin Luther King, Jr. holiday we hear the iconic ‘I Have a Dream’ speech, which was delivered at the 1963 March on Washington,” says Mandy Carter, one of the founders of the National Black Justice Coalition (NBJC) and a current NBJC Leadership Advisory Council member. “Yet, most people do not know that Bayard Rustin, an out Black gay man, was the key organizer for that groundbreaking event. America needs to know that Bayard existed. Black lesbian, gay, bisexual, transgender, and same-gender-loving people need to know that Rustin stood firm in his identity and, by his very presence, challenged others in the Civil Rights Movement to overcome homophobia.”

Carter adds, “As a young Black lesbian coming out in the mid-60s, there were no representations of out Black lesbians and gay men in the media. It would have had a profound impact on me to have had Bayard Rustin as a role model and to have known that I too could live authentically and be respected as an out Black lesbian social justice activist.”

To honor Rustin’s courage and his invaluable legacy, NBJC will spend this year celebrating the beloved “unsung hero” through its commissioned Bayard Rustin Centennial Project and in ongoing collaborations with Walter Naegle, Bayard’s surviving partner and Executor/Archivist of the Estate of Bayard Rustin. NBJC is also working with Nancy Kates and Bennett Singer, co-producers and co-directors of Brother Outsider: The Life of Bayard Rustin, a biographical documentary that asserts Rustin’s significance in American history.The recipient of more than 25 awards, Brother Outsider has been screened at The United Nations, The Kennedy Center, and for Members of Congress.

To celebrate this occasion, I thought it would be appropriate to feature videos of Mr. Rustin so we can gain inspiration by this simply awesome American hero:

Glenn Stanton twists, stands by 'particularly evil lie of Satan' quote; justifies #glaadcap - Oh you are going to love reading this. TRUST ME. It's the back-and-forth dialogue I mentioned in this morning's post with Focus on the Family's Glenn T. Stanton. Jeremy Hooper - who took part in it - has a screen shot saved of the entire encounter. For those familiar with old-school professional wrestling, it was akin to an Arn Anderson/Tully Blanchard blitz.

Focus On The Family Pushing ‘License To Discriminate’ Initiative In Colorado - Please tell us again how lgbtgs are the supposed "real haters."

Hundreds Protest Marriage Inequality Amendment In Raleigh - Meanwhile in NC, the lgbtq community and their allies are GALVANIZED against an awful amendment.

GLSEN Greater Cincinnati's 'Stories Project: NOW' Aims To Reduce Anti-Gay Bullying In Schools (VIDEO) - I fully support GLSEN. It is one of the best lgbtq organizations out there.

The religious right freak out over GLAAD's Commentator Accountability Project continues. I gathered a few comments from anti-pundits on the list:

Michael Brown - "I am honored! Jesus told us that people would speak falsely against us because of the truth. GLAAD continues to expose itself as an intolerant group devoting to censoring dissenting views. As I have often pointed out, it should be called The Gay and Lesbian Alliance Against Disagreement."

Kevin McCullough - "I got to tell you, when you get targeted by the Enemy, and I mean the Evil One, I don’t mean human beings but I mean by His forces, it can be rather earthshaking and then it can be rather deliberatively motivating."

Peter LaBarbera - “This is all about silencing, discrediting and demonizing pro-family voices. I guess GLAAD is so afraid that the truth about homosexuality will be heard that it will go to the extreme of creating a ‘blacklist’ against moral leaders — for a media already disinclined to be fair on this politically correct issue.”

From the Denver Post : Focus on the Family spokesman Gary Schneeberger called GLAAD's Commentator Accountability Project an attempt "to stifle freedom of speech and freedom of religion by trying to intimidate the media."

The irony is that none of these folks addressed the statements that they made regarding the lgbtq community; statements which they don't repeat in front of the media, which is the reason why GLAAD set up this project.

That is except for one person. Glenn T. Stanton of Focus on the Family, during a back-and-forth  on a blog, said the following:


Yes, I as a Christian believe homosexuality is a particularly evil lie of Satan. There are many. Abortion is one. Pornography is another. Sex trafficing is another. Adultery and divorce are some as well. Because they run contrary to what God created us for. If you have a problem with that, you have a problem with historic Christianity. And yes, I did it literally, but certainly not proudly.

Stanton's statement is why GLAAD's Commentator Accountability Project is needed. Stanton just admitted that he has a personal animus against homosexuality on a blog, which is something he probably wouldn't admit on national television when interviewed by someone like Dr. Phil when that show is focusing on a gay issue. He would be presented as an "expert" and his personal bias against homosexuality would not be mentioned.

And that is the gist of  the problem.

"Silencing Christians" or "silencing dissenting points of view" are merely weasel phrases. The media should be presented with information which would lead them to question the motivations of someone presenting him or herself as an expert, particularly if said person has not done the work and does not have the degrees but instead has already formed an opinion and has cherry-picked legitimate work to prove that opinion.

Don't get me wrong. That person should still be allowed to present his/her opinion on said interview or show but the media figure should ask questions about the person's motivations, statements, and expertise.

That is what GLAAD's Commentator Accountability Project is all about.

Posted by BlackTsunami at 5:18 AM 2 comments: