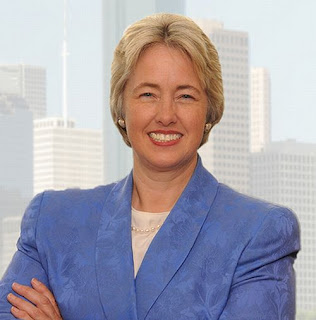 Excellent news out of Houston:

In a close run-off race of historic proportions, Houston voters chose City Controller Annise Parker as Houston's next mayor. Parker defeated attorney Gene Locke Saturday with about 53 percent of the vote (with 99.86 percent of the precincts in). When sworn in in early January, she will become the first lesbian to hold the office of mayor of a major American city and only the second woman. Kathy Whitmire held the office from 1982-1991.

Of course Parker didn't run as "the lesbian candidate," but her victory is a milestone which should be celebrated by all.

And it's definitely something to remember whenever the fight for marriage equality doesn't go our way.

It's not all doom and despair, folks.