Religious right trying to get troops to undermine DADT repeal 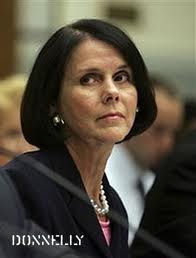 You know the religious right just won't let the DADT repeal die without a fight. The queen of irrelevancy, Elaine Donnelly is trying a new tactic:


Elaine Donnelly, president of the Center for Military Readiness, says she has already heard from a number of service members who are upset that the lame-duck session of the 111th Congress passed a bill to repeal the 1993 law banning homosexuals from military service. President Barack Obama, Secretary of Defense Robert Gates, and the Chairman of the Joint Chiefs of Staff Admiral Mike Mullen must still certify that the new law will not adversely affect troop morale and unit cohesion.

It is unfortunate, says Donnelly, that military personnel are not permitted to speak freely about the issue. Consequently, she has created a special area on her website for service members to express their concerns about the new policy.

"There is a location on the site called 'Confidential Contact.' Anyone can go there," she explains. "There is a place there to indicate military service. We never repeat names and we can convey messages on behalf of anyone on active duty service to anyone in Congress. They can also directly write their own member of Congress, but there are some issues that are bigger than individuals.

And I will bet a steak dinner on what happens next. Donnelly's site will get several (anonymous of course) comments magically mirroring religious right talking points regarding why DADT shouldn't be repealed.

Or even worse, they will claim that the commanding officers are the gay and lesbians doing the harassing.

And all of this will lead to a "coincidental" hearing about the so-called hidden dangers of getting rid of DADT.

Which of course will lead to a vote by House Republicans to somehow stop or slow down the implementation of DADT's repeal.

It's a variation of the "get rid of Planned Parenthood" plan - tacky but effective.

Posted by BlackTsunami at 2:59 PM 2 comments:

Scott Lively Warns of “Outbreak of Homosexuality” In Moldova, Part of a “Secret Plan By the Homosexual Powers of the EU” - A bloodsucking homophobic snake never retires, no matter how many times he claims to.

Santorum: Obama Will "Eviscerate" Freedom By Supporting Gay Rights - So much santorum dripping from one person has to be unhealthy.

Gay Legislators Having Impact In Marriage Debates - Some good news for a change.

Boehner launches effort to defend gay-marriage ban - Surprising NO ONE. But I am intrigued to learn just how will Boehner and company try to defend this monstrosity.

The truth about African-American voters and gay marriage

A recent piece in The Root breaks down - or rather - tears apart assumptions about the African-American community and the subject of gay marriage:

According to The Root:

A report indicates that black voters who don't support same-sex marriage will vote for candidates who do. This spells opportunity for white LGBT activists, if they're willing to take heed.

Basically the article seems to be saying that it's not that the black community does or doesn't support gay marriage, it's just that it's not on the top of the list of concerns to many black voters:

Focused far more on job creation, health care and education than on gay marriage, black voters aren't supporting conservative candidates simply because they oppose LGBT rights. Instead, they are voting for progressive pro-LGBT candidates -- despite disagreeing with their pro-LGBT platforms.


"The truth is, we just don't see blacks voting against a candidate based on [his or her] support of gay marriage," says Patrick Egan, assistant professor of politics and public policy at New York University. "We actually don't see this becoming an important issue for voters of any race."

Lastly, the article gives a little advice to those pressing for gay marriage - something which many lgbts of color have been saying for the longest - don't take the black voter for granted because of assumptions. Include black voices in your messaging:

As in Maine's successful 2009 marriage-equality repeal, national white LGBT leaders will undoubtedly "parachute" into Maryland to help direct the ballot battle. But this time, black voters -- and leaders -- must take central roles in defining the battle's narrative.

This was the case in the successful 2010 campaign to secure marriage equality in Washington, D.C.; pro-LGBT black voices and faces must now be front and center if a similar campaign comes to Maryland. And white LGBT leaders will have to step aside and let this happen.

"One of the reasons the D.C. campaign was so successful is that black voters -- including religious voters -- saw folks like themselves supporting marriage equality," explains Lanae Erickson, deputy director of the Culture Initiative at the Third Way. "Just as important: Many [white] LGBT leaders went out of their way to ensure that these [black] activists were heard."

Posted by BlackTsunami at 1:51 AM 3 comments: