For decades, the anti-lgbt industry have targeted our community with deliberate lies and scientific distortions about our lives. They have painted us as valueless indicators of a society running away from God.  But last weekend, all they had to do is make a simple stand against an individual whose comments about women proved that he is pretty much everything they have claimed us of being.

It would seem so easy for them to rebuke him, wouldn't it? Hardly.

“People of faith are voting on issues like who will protect unborn life, defund Planned Parenthood, defend religious liberty and oppose the Iran nuclear deal,” said Ralph Reed, who heads the Faith & Freedom Coalition. “A ten-year-old tape of a private conversation with a talk show host ranks low on their hierarchy of concerns.”

Why some top evangelicals are standing by Trump

“My personal support for Donald Trump has never been based upon shared values, it is based upon shared concerns about issues such as: justices on the Supreme Court that ignore the constitution, America’s continued vulnerability to Islamic terrorists and the systematic attack on religious liberty that we’ve seen in the last 7 1/2 years.”

"The crude comments made by Donald J. Trump more than 11 years ago cannot be defended. But the godless progressive agenda of Barack Obama and Hillary Clinton likewise cannot be defended. I am not endorsing any candidates in this election. I have said it throughout this presidential campaign, and I will say it again—both candidates are flawed. The only hope for the United States is God. Our nation’s many sins have permeated our society, leading us to where we are today. But as Christians we can’t back down from our responsibility to remain engaged in the politics of our nation. On November 8th we will all have a choice to make. The two candidates have very different visions for the future of America. The most important issue of this election is the Supreme Court. That impacts everything. There’s no question, Trump and Clinton scandals might be news for the moment, but who they appoint to the Supreme Court will remake the fabric of our society for our children and our grandchildren, for generations to come."

In all honesty, the fact that these men are seen as faith leaders in the first place is astounding. Ralph Reed was involved in an ugly scandal exploiting Christian mobilization against gambling casinos.  The scandal cost him an almost assured win as Lt. Governor of Georgia.

Long before he made a name for himself as a so-called pro-family advocate, Gary Bauer undermined efforts to educate Reagan on the AIDS crisis and efforts to get the president to address it publicly. He undermined Surgeon General C. Everett Koop as the crisis swept through the nation.

Why are we shocked that supposed faith leaders like Graham, Bauer, Reed, and Perkins are willing to overlook Trump's comments about sexually assaulting women?  The question needs to be how in the hell did these folks become "anointed" as this country's faith leaders in the first place?
Posted by BlackTsunami at 9:31 AM No comments:

SBC official - Trump has 'snuffed out' the religious right 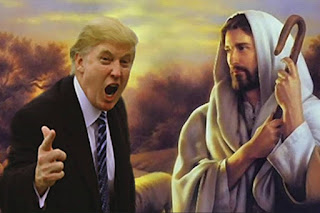 I'm sure Russell Moore, president of the Ethics & Religious Liberty Commission of the Southern Baptist Convention, won't win any applause from folks like Franklin Graham, Tony Perkins, or James Dobson with a recent piece he wrote in The Washington Post.

But he makes a good point in his claim that Donald Trump has wrecked the religious right. Part of it is as follows:

Some of the very people who warned us about moral relativism and situational ethics now ask us to become moral relativists for the sake of an election. And when some dissent, they are labeled as liberals or accused of moral preening or sitting comfortably on the sidelines. The cynicism and nihilism is horrifying to behold. It is not new, but it is clearer to see than ever.


There is good news, though, behind all of this, regardless of how this election turns out. The old-school political Religious Right establishment wonders why the evangelical next generation rejects their way. The past year is illustration enough. The evangelical movement is filled with younger, multiethnic, gospel-centered Christians. They are defined by a clear theology and a clear mission — not by the doctrinally vacuous resentment over a lost regime of nominal, cultural “Christian America.”

The people who have used the gospel to sell us politically cynical voting guides have done damage. But they are not replicating themselves in the next generation.

You can read the column in its entirety here.
Posted by BlackTsunami at 5:03 AM 1 comment: