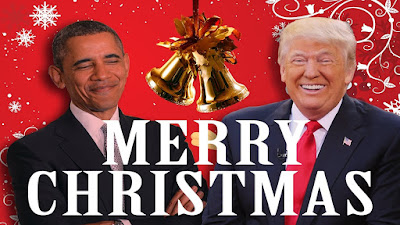 Trump is a disaster of an embarrassment of a president. But one thing about him I will consider a positive is how the religious right and anti-LGBTQ industry have no compunctions about publicly humiliating themselves to figuratively kiss his feet.

A perfect example is the following from anti-LGBTQ hate group and faux Christian group the Family Research Council:

There've been a lot of wise men in the White House. But this Christmas, there are three more in the East Room, where the Trumps are highlighting a larger-than-life nativity scene. That's just one of the ways the First Family is separating itself from the Obamas, who came dangerously close to ditching the 50-year-old display in 2009. There wasn't room for Jesus at the inn -- and for eight years, there wasn't much room for him at 1600 Pennsylvania either.

The Obamas famously wanted a "non-religious Christmas" (which makes about as much sense as a vegetarian barbeque). But they were outed by their social secretary, Desiree Rogers in an eye-opening profile piece for the New York Times. "The lunch conversation inevitably turned to whether the White House would display its crèche, customarily placed in a prominent spot in the East Room. Ms. Rogers, this participant said, replied that the Obamas did not intend to put the manger scene on display -- a remark that drew an audible gasp from the tight-knit social secretary sisterhood. (A White House official confirmed that there had been internal discussions about making Christmas more inclusive and whether to display the crèche.)

Ultimately, the Obamas caved to pressure and included the nativity in its décor. For two terms, that was the extent of Christmas in the White House. There were no mentions of Christmas on official cards -- and only a smattering of references in eight years of greetings and special events. After eight years of making political correctness a state religion, it's really no wonder Americans flocked to a man who isn't afraid to call the season what it is.

"You go to stores, you don't see the word Christmas," Donald Trump argued on the campaign trail. "It says 'happy holidays' all over. I say, 'Where's Christmas? I tell my wife, 'Don't go to those stores'... I want to see Christmas." Thanks to the president and First Lady, Americans are seeing Christmas. The White House is alive with tradition, from the "Merry Christmas" on the White House card to its official hashtag #WHChristmas. To the Trumps, it's just another way of keeping their promise.

"Something I said so much during the last two years, but I'll say it again, as we approach the end of the year, you know we're getting near that beautiful Christmas season that people don't talk about anymore," the president said at last month's Values Voter Summit. "They don't use the word Christmas because it's not politically correct. You go to department stores, and they'll say 'Happy New Year,' and they'll say other things. It'll be red. They'll have it painted. Well, guess what? We're saying Merry Christmas again."
The crowd erupted in cheers -- completely baffling the media. Like most liberals, they couldn't understand why the issue resonated so much with conservatives. Other reporters almost mocked the line, latching on to it as another silly soundbite on an issue they consider so trivial. But to every Christian in that room, the president was talking about a lot more than the war on Christmas. He was speaking directly into the fight for religious liberty in America.

Maybe the mainstream media didn't notice how stifled Christians were under Barack Obama's government -- how everything they said or wore or posted was scrutinized (or worse, punished). After two terms of the most hostile administration to faith the country has ever seen, I guarantee no one takes the simplest expression -- "Merry Christmas" -- for granted. To the people who elected Donald Trump, this isn't just about putting Christ in a day. It's about putting faith back in American life.


First of all, let me make a quick sidebar here. I for one, am so sick of people like Tony Perkins bogarting the word "Christian" as if God gave them the patent to it. If you asked another group of Christians, say African-American Southern Baptists, about feeling stifled under Obama, they would have a totally different reaction.

But back to the subject at hand -  Perkins isn't the only conservative celebrating over this nonsense, but it is the height of shallowness that he refers to a 2009 article spotlighting former Obama social secretary Desiree Rogers (and probably truncated by his group) to attack the former president.

It is even more shallow, more ridiculous, and just downright sad that Perkins seems to be implying that Trump is a better president than Obama because his Christmas decorations include a Nativity scene or that he makes it a point to say "Merry Christmas."


Senate Republicans Will Give Christian Right an Easy Victory in Exchange for Tax-Bill Lobbying - If you see organizations like the Family Research Council and the American Family Association and people like Franklin Graham lobbying for the GOP tax bill or urging their followers to do so, it's not because they think it will benefit Americans. It is because the tax bill will give these so-called religious entities more power in endorsing candidates and funneling campaign donations through churches. They don't give a rip about how damaging this bill would be for the country.


The GOP’s effort to let churches endorse candidates is deeply unpopular - And even though the idea of churches becoming more politically powerful (while most likely keeping their tax-exempt status) is unpopular, it won't stop these folks. It was never about morality or values. It was always about power and the forcing of their views on the country because of their sense of entitlement.

And if you think this won't cause havoc for the LGBTQ community, think again.

The Ultimate LGBT Glossary: all your questions answered - It includes the phrase "baby gay," but not "pocket gay." I like "pocket gay."

$100 million for gay purge victims as PM apologizes for LGBTQ discrimination - Canada is making amends to military members and federal employees whose careers were destroyed because of a "gay purge."

The Senate Just Voted Down All The Conservative Amendments To The Same-Sex Marriage Bill - WOW! Go Australia!


Posted by BlackTsunami at 9:14 AM No comments: