Compared To The Klan? That's Manna From Heaven! - You all have read my piece this morning regarding the Family Research Council. Now here is another, very excellent, more comical, and very detailed view of the situation by a fellow blogging buddy of mine.

Bad News For NOM: Supreme Court Lets Stand WA Campaign Disclosure Rules - The National Organization for Marriage gets smacked down again. This is shaping up to be a nice week.

Gay Belgian Couple to Reunite with Son Kept from Them for Two Years After Homophobic Surrogacy Nightmare - I love a happy ending.


Montana Legislature Moves to Stop Towns from Covering Sexual Orientation and Gender in Anti-Discrimination Laws - In November 2010, we not only let the inmates out of the asylum, we elected them to public office.


Duncan do nots: CA Rep. out to stop #DADT repeal, maintain T.Perkins appeal - Oh sure. Mess with the DADT repeal. It's not enough for the Republican party to get women really angry at them. They want the entire lgbt community in the mix. And we don't like them in the first place.

Posted by BlackTsunami at 2:53 PM No comments:

The constant refrain of the anti-gay group the National Organization for Marriage is that they are unfairly being called bigots and haters "simply" because of their opposition to gay marriage.

But, just like when the Family Research Council makes this claim, NOM isn't telling the entire story. Their opposition to gay marriage only scratches the surface.

Just like almost every organization claiming to stand up for morality and "Judeo-Christian" ethics, NOM is slyly pushing anti-lgbt propaganda which has been consistently refuted.

Take for example, the following piece on its blog: 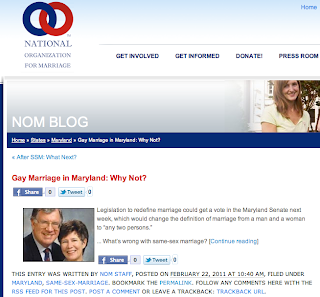 If you followed the link provided by NOM's blog, you would find a piece written by Mike McManus published in the Daily Reporter.

The information in his piece is highly flawed. Take this passage for example:

Is this an atmosphere in which children should be raised? I think not. The media portrays gay marriages with children as normal. They are not.

Of course McManus is comparing two different studies - one involving married couple and the other involving gay couples who are not married. And he conveniently does not tell anyone the year of the study involving heterosexual couples. That's because it was published in 1997:

A telephone survey conducted for Parade magazine of 1,049 adults selected to represent the demographic characteristics of the United States found that 81 percent of married men and 85 percent of married women reported that they had never violated their marriage vows.

It would seem that McManus rounded off the numbers.

Now let's talk the 1978 study he cited concerning gay men. As admitted by McManus, the study was published over 30 years ago. The study was a part of a book entitled Homosexualities which only looked a certain portion of the lgbt population (gay men in the city of San Francisco). It also did not look at same-sex households, so  McManus is inaccurate in using it to discredit same-sex households raising children.

Read more »
Posted by BlackTsunami at 9:34 AM No comments:

The Family Research Council has yet to give a "detailed response" to charges lodged by the Southern Poverty Law Center that it spreads untrue propaganda about the lgbt community by means of either junk science or distorted science.

However, the group did take time out of its day to send out the following email requesting money. I took the liberty of zeroing in on the most pertinent part:

As you may have heard, the ultra-liberal Southern Poverty Law Center (SPLC) recently declared Family Research Council and a few of our allies as "hate groups."

How do you feel about you and FRC being lumped in with neo-Nazis, the Ku Klux Klan, racist skinheads, and other radical organizations?

I am outraged. But more than that, I am concerned. Never before has FRC been slapped with such a false and malicious accusation by an organization claiming to be mainstream.

Thankfully, we have hundreds of good friends who have stepped forward to denounce the SPLC in the strongest possible terms and to declare their support of FRC. The list includes national leaders who signed a Statement of Support.

Now I urge you to show you won't be intimidated into silence. Please follow this link to take your place alongside these leaders and others in defense of FRC by making a tax-deductible donation to support our work.

The SPLC is pressuring major news networks, magazines, newspapers, and online news and opinion outlets to not invite us on their programs, run our opinion pieces, or quote our views. It even hosted an event aimed solely at smearing FRC.

The SPLC is now attacking FRC and other groups that uphold Judeo-Christian moral views, including marriage as the union of a man and a woman.

By labeling its opponents "hate groups," the SPLC is saying: No discussion. No consideration of the issues. No engagement. No debate!


As usual FRC is playing the victim while evading the true story. SPLC said the following about FRC and several other so-called pro-family groups:

. . . a hard core of smaller groups, most of them religiously motivated, have continued to pump out demonizing propaganda aimed at homosexuals and other sexual minorities. These groups’ influence reaches far beyond what their size would suggest, because the “facts” they disseminate about homosexuality are often amplified by certain politicians, other groups and even news organizations. . . Generally, the SPLC’s listings of these groups is based on their propagation of known falsehoods — claims about LGBT people that have been thoroughly discredited by scientific authorities — and repeated, groundless name-calling. Viewing homosexuality as unbiblical does not qualify organizations for listing as hate groups.

The falsehoods in question include the beliefs that:


For its part, SPLC has listed detailed reasons as to the inaccuracies of these claims.

FRC, on the hand, has yet to fully answer SPLC's charges even though it said two months ago that it would give a "detailed response."

FRC's entire campaign  of  "they are trying to silence us" has been a clever dodge, or a non-sequitir which only serves to cover up that SPLC is in fact pushing for the debate while FRC is avoiding it.

Conveniently absent from FRC’s email - and its other statements - is suitable refutation to SPLC’s charges or any type of refutation at all.

At the times in which FRC did try to address the charges head on, such as when FRC head Tony Perkins went on the news program Hardball or when an FRC employee recommended a piece written by Perkins,  the organization was called out for engaging in exactly the same tactics SPLC accused them of - distorting science to denigrate the lgbt community.

No one wants to silence FRC.

Not SPLC, nor do I, nor does any other person who sent emails to the organization asking for the "detailed response" to SPLC's charges, which FRC promised to give.

All we want are answers. And we have yet to receive those answers.

In the long run, FRC's plea for donations may be successful in terms of monetary benefits.

But what about personal integrity?

If the FRC considers itself a Christian organization, then it needs to act like one.

And somehow I don't think that spreading untrue stories about the lgbt community and then playing the evasion game when called out on this behavior is a Christian virtue.

Stating that you are a moral, Christian group doesn't necessarily make you one. Especially when your actions have been most un-Christian.


Peter Sprigg of the Family Research Council just can't stop engaging in duplicitious tactics - Pay attention to this post. In an interview last week, FRC spokesperson Peter Sprigg criticized studies looking at same-sex households in part because the studies in question doesn't compare same-sex households to heterosexual households. However Sprigg's objection is ironic seeing that he freely cites studies that don't compare the two dynamics when he denigrates heterosexual households.

Will the Family Research Council ever fulfill its promise and address SPLC's charges?

Posted by BlackTsunami at 5:06 AM No comments: