A recently new study confirmed yet again that children do well when raised by same-sex couples.

The study, conducted in Australia by University of Melbourne researchers “surveyed 315 same-sex parents and 500 children.” The children in the study scored about six percent higher than Australian kids in the general population. The advantages held up “when controlling for a number sociodemographic factors such as parent education and household income.” The study was the largest of its kind in the world. The lead researcher, Dr. Simon Crouch, noted that in same-sex couples parents have to “take on roles that are suited to their skill sets rather than falling into those gender stereotypes.” According to Crouch, this leads to a “more harmonious family unit and therefore feeding on to better health and well being.” The findings were in line with “existing international research undertaken with smaller sample sizes.”


Just like clockwork, however (I swear you can set your watch by it,) the Family Research Council is crying foul. From an email sent by FRC President Tony Perkins:

The Washington Post could barely contain its excitement in a new headline, "Children of same-sex couples are happier and healthier than peers, research shows." This was double trouble, since the Post got its analysis wrong, and the latest study out of Australia suffers from the same flaws as almost all other pro-homosexual parenting research. The study is not of same-sex couples, but of "same-sex attracted parents," who may or may not be in a relationship. It found that children with such a parent scored higher on measures of "general health," "general behavior," and "family cohesion" -- yet lower (by less tha n the margin of error) on "mental health."

But the data are of dubious value to begin with, because they are based on the parents' own self-report ("My kid is doing great!") rather than a more objective measure; and they are drawn from a "convenience sample" (like people responding to an ad in the "gay" media) rather than a genuinely random one. The distortion this introduces is clear from the socioeconomic profile of the sample -- 73% of the homosexual parents had at least a college degree (vs. 28% of all Australian mothers), and 59% (79% of the men) had household incomes over $100,000 in Australian dollars (the median Australian household income is only $64,168).


It gets better. Guess what FRC compares the Australian study to:

In his 2012 research, sociologist Mark Regnerus of the University of Texas at Austin turned the conventional wisdom of the politically correct academic world on its head by proving that children raised by homosexual parents do suffer disadvantages when compared to children raised by their married mother and father. FRC's Peter Sprigg analyzed the study -- published in the journal Social Science Research. He and others confirmed that it was the most careful, rigorous, and methodologically sound study ever conducted on the issue -- which explains why liberals have tried so desperately to discredit it.

Regnerus's research found numerous and significant differences between these groups -- with the outcomes for children of homosexuals rated "suboptimal" (Regnerus's word) in almost every category. His study remains the gold standard for such research -- and it clearly showed children do better with a married mom and dad.


First of all, let's get one thing out of the way (and I admit I am doing this to be extremely bitchy even though the words I say are true),  Peter Sprigg couldn't analyze himself out of a paper bag.  He is a former actor and - judging by the anti-gay hate group he chooses to associate himself with, i.e. the Family Research Council - a presently failed Christian pastor.

But I find it so deliciously ironic that the Family Research Council uses the Regnerus study in an attempt to discredit the Australian study. I'm sure that the Family Research Council is aware of the multitude of credibility problems the Regnerus study had in terms of accuracy and partiality as evidenced by the statement "liberals have tried so desperately hard to descredit it."

Speaking as one of those liberals, we didn't have to try all that desperately hard to discredit Regnerus.  It was rather easy to refute.

FRC did not mention that Regnerus's study was discredited by over 200 researchers, the sociology department of his own university, the American Sociological Association, and last but not least Michigan federal judge, Bernard Friedman earlier this year when he struck down that state's law against marriage equality.  Friedman said the following about the Regnerus study:

“The Court finds Regnerus’s testimony entirely unbelievable and not worthy of serious consideration. The evidence adduced at trial demonstrated that his 2012 ‘study’ was hastily concocted at the behest of a third-party funder, which found it ‘essential that the necessary data be gathered to settle the question in the forum of public debate about what kinds of family arrangement are best for society’ and which ‘was confident that the traditional understanding of marriage will be vindicated by this study.’ … While Regnerus maintained that the funding source did not affect his impartiality as a researcher, the Court finds this testimony unbelievable. The funder clearly wanted a certain result, and Regnerus obliged.”


This sad attempt by the Family Research Council to discredit pro-lgbt study findings reminds me of that old saying "it's better to be thought a fool than to open your mouth and remove all doubt." However, it would be fitting to remove the word "fool" and substitute the phrase "ignorantly sputtering homophobes."

Posted by BlackTsunami at 6:15 PM 2 comments:

I don't care what anyone says, I think there is a certain "we are just saying this @!#* just to get paid" mentality amongst some anti-gay leaders. And as of today, the Family Research Council's Tony Perkins and Fox News personality Todd Starnes has entered that club.

Tony Perkins invited Fox News’ go-to-Christian-persecution-commentator Todd Starnes to join him on the weekend edition of “Washington Watch,” where Starnes pointed to recent remarks by Rick Warren and Russell Moore warning of the imminent imprisonment of Christians in America as proof that Christians will indeed soon face jail sentences. Perkins, who recently warned that gay rights advocates are about to launch an anti-Christian Holocaust, naturally agreed that such arrests are going to “play out very quickly in our day.”


Seems to me that if I were Perkins, or Starnes, Warren, and Moore for that matter, I wouldn't worry about Obama or any lgbts putting them in jail. I would be more worried about someone obtaining my bank statements and paycheck stubs. If that ever happened, after some Christians I know got hold of them, they would be begging to be put in jail.
Posted by BlackTsunami at 2:41 PM 2 comments:

Children Of Gay Parents Are Happier And Healthier Than Their Peers, New Study Finds - Naturally the religious right is silent over this revelation. We won't be, though.

Herman Cain Nostalgic For Time When Burger King Didn’t Support Gay People - I'm nostalgic for the day when every dumbass didn't think he was presidential material.

AFA's Fischer spends Independence Day equating homosexuality with necrophilia - I PERSONALLY would have been disappointed if he had not done this. LOL

Matt Barber Celebrates The Fourth Of July By Warning That America Is On The Verge Of Judgment - And every payday, Barber will cash his paycheck. Kinda gives you a clue as to whether or not he believes the junk he spews.

Scott Lively: There Is A Gay Agenda, And It 'Reflects An Insane And Satanic Delusion' - Blah, blah, blah, we are trying to destroy Judeo-Christian values. That in itself is a huge lie which is easy to disprove. Anyone with a quarter of a brain know that Lively himself is taking care of that function rather nicely.
Posted by BlackTsunami at 9:08 AM No comments:

Time and time again, anti-gay groups and their supporters have exploited fear of the transgender community in order to hinder lgbt equality.

Beware of "predators invading women's restrooms and locker rooms pretending to be women," they tell us. They also say that this will happen should communities pass  lgbt anti--discrimination laws.

Better yet, check out this following graphic courtesy of Media Matters. The organization published it a while back and  I was hoping that it would be picked up and passed around to educate people on fears of the transgender community.

It hasn't, but it should be: 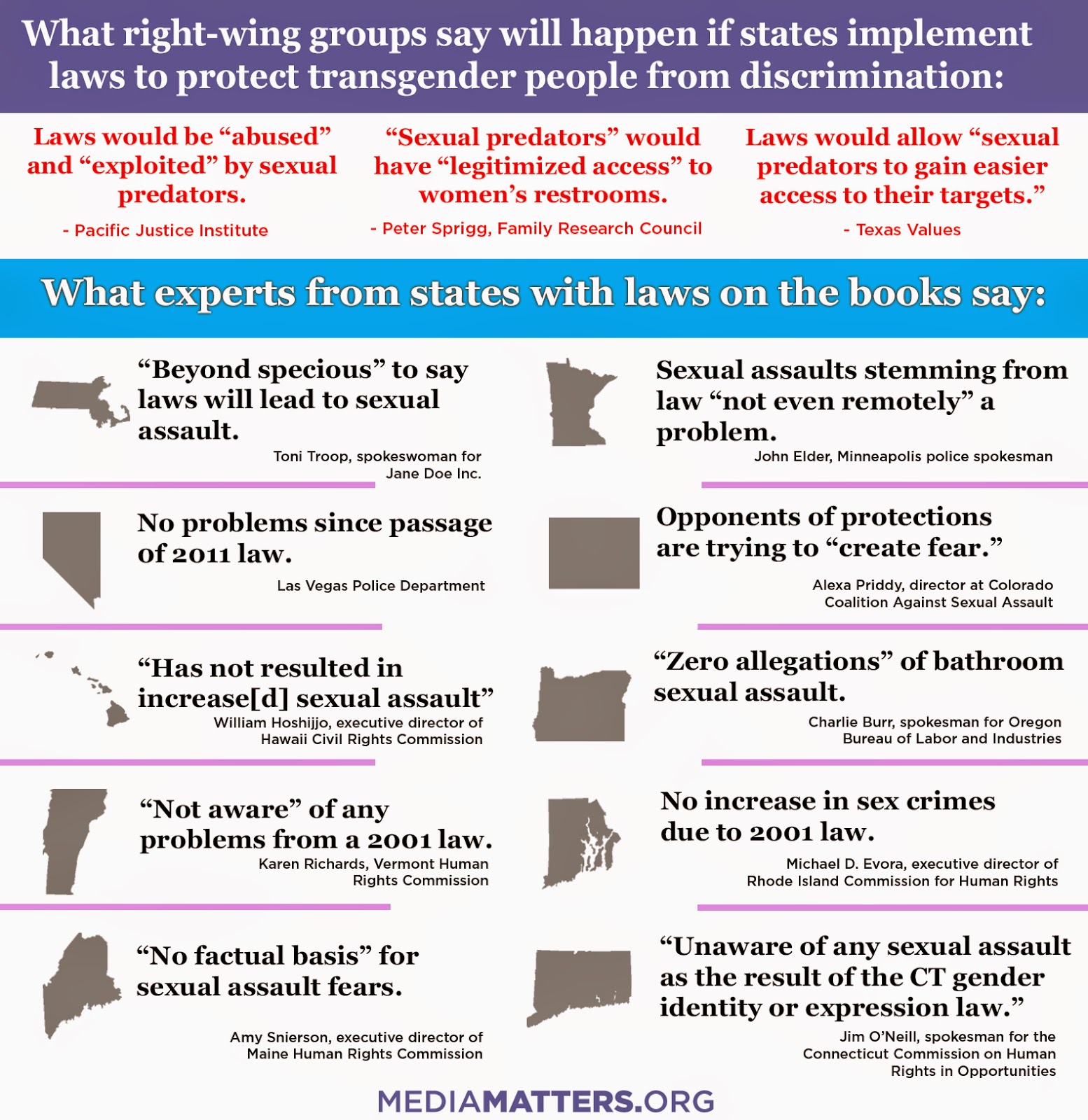 Posted by BlackTsunami at 4:55 AM 4 comments: