Anti-gay group NOM humiliates itself twice in one day

Today, the National Organization for Marriage not only suffered a double embarrassment, but proceeded to wallow in both humiliations, as if they were nothing.

Meanwhile, enterprising folks like myself are going to do what we can to make NOM's stupidity go viral. But it's not as if NOM isn't helping us.

First comes this item from Goodasyou.org by way of Think Progress:

The National Organization for Marriage is trying its best to rally support for its “March for Marriage” on March 26, which will have a full slate of religious anti-gay speakers. The group is even trying to pretend that inviting people is the same as having people attend to make it look like they have more support. But now it seems that NOM has a particularly despicable partner for the March, Southern Baptist pastor Wiley Drake, who regularly prays for people’s death, including President Obama. Jeremy Hooper noticed not only that Drake is promoting the march, but that he shared an email exchange coordinating his support with the march organizers. In fact, he committed to bringing his Congressional Prayer Conference broadcast to the march, and the event coordinator seemed all too grateful for his support.


And just in case you need confirmation of this prayer, listen to him double down on it when interviewed by news personality Alan Colmes:

And as if that's not bad enough, check out the following tweet from NOM president Brian Brown: 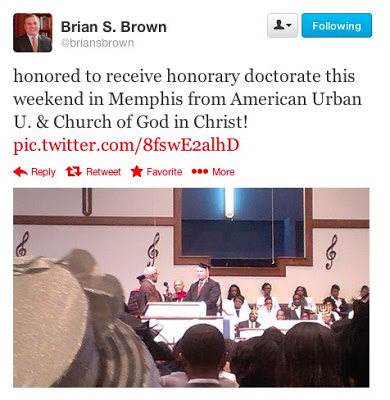 I would say that congratulations are in order except for one MAJOR problem:

There is no such thing as American Urban University.  You will notice that the background where Brown is receiving this "honorary doctorate" resembles a church.

According to Bizpedia, the president of American Urban University was Bishop George D. McKinney from St. Stephen’s Cathedral Church of God in Christ in San Diego, CA.  Bishop McKinney is one of the organizers of Coalition of African American Pastors, the group giving Mr. Brown the honorary degree.However, the university’s corporation status was suspended in 1989.

Not surprisingly, although Bishop McKinney’s biography on the church website mentions the many universities where he has studied and talks about his many accomplishments, it doesn’t mention American Urban University.

So on the same day that NOM's Brian Brown sends out a tweet of himself receiving an honorary degree from a non-existent university, it is discovered that his group is teaming up with a pastor who prayed for President Obama's death.

When I was young, we had a phrase for when someone embarrassed themselves. We called it "giving up your cool points." If NOM keeps this up, the organization will only be left with "cool stamps."

Hat tip to John Becker.
Posted by BlackTsunami at 2:47 PM No comments:

WATCH: Bill O’Reilly’s Team Harasses Gay Colorado Speaker Over Child Molester Laws - Not content with making wild charges which led this man's 14-month-old daughter to be the subject of vile threats, O'Reilly continues to harass a Colorado gay legislator on those same lies. This isn't journalism. It's demagoguery. Dangerous demagoguery at that. For those who don't think what O'Reilly is doing is dangerous, I have two words for you - George Tiller.

Carly Rae Jepsen Backs Out of Boy Scouts Jamboree Over Gay Ban - And the group Train also backed out. Key the religious right groups who will whine about how lgbts played the bullies. Whatever.

NOM confuses ability to extend an invite with actual support - Chalk it up to another failure for NOM.

CA lawmaker seeks rights for transgender students - I hope he is successful.
Posted by BlackTsunami at 9:02 AM 1 comment:

Recently, the family of Tyler Clementi was joined by GLAAD, the Human Rights Campaign (HRC), and Equality Matters in calling on Jennifer Morse of the National Organization for Marriage (NOM) to apologize for her recent speech to Iowa State University students on February 17, in which she used the story of Tyler Clementi’s death as an example of why it is “not the best thing” to let lesbian, gay, bisexual and transgender people be friends with other LGBT people, or be supported by the LGBT community.

Clementi, who died by suicide, was a student at Rutgers University when his roommate secretly recorded video of him kissing another man. Morse mentioned Clementi’s story, saying, “There are a lot of situations where people are doing something sexual that’s probably not the best thing for them…” Morse used Clementi as an example of LGBT youth who she claimed are, "… getting help and support from the gay activists who have their own thing that they’re doing which is not necessarily to help the individuals but they’ve got some sort of political vision."

"To exploit our late son's name to advance an anti-equality agenda is offensive and wrong," said Joe and Jane Clementi, the parents of Tyler Clementi. "By doing so, National Organization for Marriage prove that not only is there no low they will not sink to, to advance their cruel agenda - but that neither they nor Ms. Morse have any grip on reality. The very idea that Tyler's tragedy happened because of too much support - instead of not enough - is ludicrous. Shame on them."

"This is among the more reprehensible tactics we've seen from NOM, and this is a group whose internal documents touted the use of racially-motivated tactics to pit Black and Latino people against their own LGBT friends, neighbors and family members," said GLAAD President Herndon Graddick. "Now they're using Tyler's story to pit young people against their own peers."

"That NOM would invoke Tyler as a part of spreading their hateful messages shows a real lack of moral compass,” said HRC Vice President of Communications Fred Sainz. “This is more proof that NOM is not in tune with mainstream America but instead is driven by the fringe agenda of a few secretive anti-gay donors. NOM should do the right thing and immediately apologize to the Clementi family."


Unfortunately, I don't think NOM will be making any move to apologize. If I know the organization, the demand will be ignored.

Posted by BlackTsunami at 4:39 AM 3 comments: