Don't be fooled. The Family Research Council doesn't give a d@mn about any of your children.

Below is the graphic from a Family Research Council email asking for money: 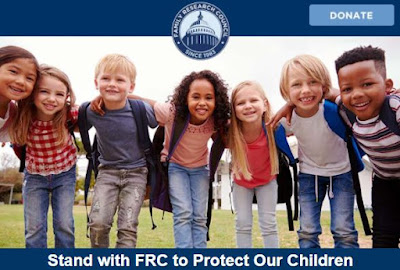 The email is the usual lies about the need to protect America's children from 'pornographic sex education,'  'LGBT ideology,' 'a pervasive anti-American sentiment' and (here's a new one) Critical Race Theory (which, for those who aren't familiar with the term, is the new way conservatives are scaring the hell out of their base.)

As odious as this ridiculous - and probably successful - fundraising attempt is, it gets even more nauseating when one remembers other ways FRC invokes 'protecting children' in its literature: 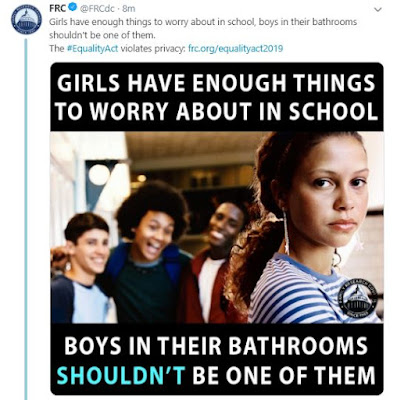 I'd be willing to believe that the Family Research Council actually did care about children in its own twisted way if it weren't for the group falsely implying that transgender children are rapists and all-around predators.

In reality, the Family Research Council sees children in the same manner which it sees religious beliefs, which is as a commodity for money, fear, and power.

Posted by BlackTsunami at 4:28 PM No comments:

'Over 500 corporations support Equality Act, but it may not even matter' & other Wed midday news briefs 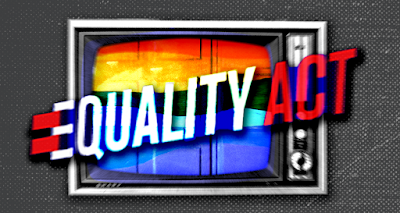 Over 500 corporations back effort to support Equality Act. Does it matter? - It probably doesn't because as the article notes, many of these companies are supporting legislators standing in the way of it being passed. Some people want to blame Biden for this, but we can't.
St. Vincent Catholic Charities wins settlement that allows charity to deny adoption to LGBTQ couples​ - Half of the story. It was an overall victory for our side but little crinkles for the religious right. Such as this.
This gay NASCAR driver just raced at Daytona for the first time since coming out - How did he do?
'Batgirl' casts Ivory Aquino as first trans character in a DC Comics feature film - Good for them!
Posted by BlackTsunami at 9:18 AM No comments: