In the unsuccessful fight against marriage equality, former National Organization for Marriage president Brian Brown liked to portray himself and his organization as defenders of freedom who merely wanted a conversation about the issue. We all knew it was a lie. I guess the loss he suffered has made Brown abandon that fake posturing.

You wouldn’t know it from Brown’s description of Dveri as a “pro-family” party, but the Dveri Party is a fringe far-right nationalist movement that just barely won representation in parliament in 2016 by joining forces with another party to narrowly overcome the threshold of 5 percent of the vote.

. . . Brown’s email about Obradovic was practically a love note:

Bosko is much more than a committed and outspoken supporter of the family, he’s a true champion and courageous leader. The other day, he gave an incredible speech before the Serbian Parliament that was a true tour-de-force, an incredibly powerful rebuke of the LGBT movement. He spoke truth to power, and passionately took on the majority’s insistence on imposing pro-“homosexualism” on society.

The rest of Brown's email is nauseating hero-worship so sappy that it would make you develop a case of diabetes.

In reality,the speech is horrid. To to call it a "hot mess" is an insult to all hot messes in the world. This speech is so nasty there needs to be a new term to properly describe just how ugly it is. You can see it below but here are the quick points about it: Obradovit calls for all pride parades to be outlawed. He calls the LGBTQ community a totalitarian cult, which (wait for it because you know it's coming) is attempting to recruit children into our supposed lifestyle. He even pulls the "I don't have a problem with anyone's lifestyle" nonsense.

No wonder Brown loves this speech so much. It's the same mess he tried to peddle to America. The conundrum is amusing, though. It figures that the only time Brian Brown gets all "hot and bothered" over a man is because he gives a speech claiming that gays want to recruit children.


Posted by BlackTsunami at 2:57 PM No comments:


How the Trump Administration Impacted the LGBTQ Community Since the 2016 Election - Here's a hint. It's been a stinking pool of nastiness. And of course the worse is yet to come, but that doesn't mean we are going to lose. Let's rock, biiitaches!!

14-year-old shot dead by his father because he didn't want a gay son - Oh God in Heaven!

Two People Crashed A Church Service To Campaign Against Same-Sex Marriage - This happened in Australia, but still deserves a "oh no you didn't!!!!"

Same-sex marriage conference to take place in Costa Rica - It's nice to see folks on our side of the spectrum not fall for the "it's over! we've won!" lie.

10 Companies Leading the Way on Global LGBTI Rights - This is good know. The fight continues but we have some good allies.
Posted by BlackTsunami at 9:07 AM No comments: 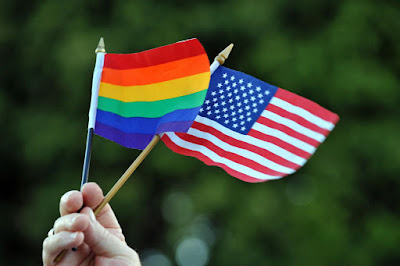 Editor's note - A repost from earlier this year.

With Trump in the White House, religious right groups such as the Family Research Council and figures like Franklin Graham and Fox News personality Todd Starnes are eager to get certain goals accomplished.

High on their list is a dehumanization of the lgbt community under the seemingly innocent courtesy of “religious liberty,” or allowing entities and people to discriminate against queers under the guise of “personally held religious beliefs.” It’s been a goal they have been working on for a long time and with Trump as president, they hope to reap benefits for all of the stories and hype they have spun about bakeries and florists “forced” to accept money from queer customers for their services, government employees like Kim Davis “forced” to do their jobs, and religious groups such as Catholic Charities with its adoption services which are “forced” to say no to government money because they refuse to not discriminate against lgbts.

They imply that it’s all about preserving the integrity of the “faith” of groups and people supposedly targeted by lgbts with a huge phone book, an obscene amount of Facebook friends, a pipeline to a secret worldwide organization not unlike the one James Bond has fought against, and long list of IOUs to cash in for being denied the right to supposedly “flaunt” their lifestyle or “pervert” marriage all of these years.

Okay, I am exaggerating a little bit, but the gist of what I said is true. And so is my next statement. Like so many times before, the entire truth about “religious liberty” is a world of difference from what is fed to us by the religious right. Unfortunately, the terms of this debate are usually dictated by them because they appear to have the loudest megaphone and the most access to the media, even if what they say isn’t necessarily true.

Here is a fact about the “religious liberty” argument which is generally not talked about but needs to be moved in the midst of the discussion. The argument as it is presented now is degrading, embarrassing, and simply hurtful. It’s yet another attempt by the religious right to put us on the defensive and make us have to justify our existence and our right to respect and dignity.