Dr. Demetre Daskalakis​  is President Biden's National Monkeypox Response Deputy Coordinator. Conservatives have been driving themselves crazy with attempts to smear him.

From The Advocate via Yahoo News:

In recent days the Biden administration’s monkeypox response deputy coordinator, Dr. Demetre Daskalakis, has been attacked by right-wing figures and media. The reason? His thirst traps, his tattoos, and his sexuality. The conservative media outlet The Daily Caller specifically targeted Daskalakis and his history of being open about being gay as well as being directly involved on the front lines of health care. What’s ensued is a wave of homophobic attacks against Daskalakis. The reporter who wrote the Caller piece tweeted, “Meet Joe Biden's monkeypox czar: a ‘progressive, radical gay' doctor who performs HIV screenings in sex clubs and gives meningitis shots in drag. Now he's in the White House.”

One attack is accusing Daskalakis of being a Satanist: 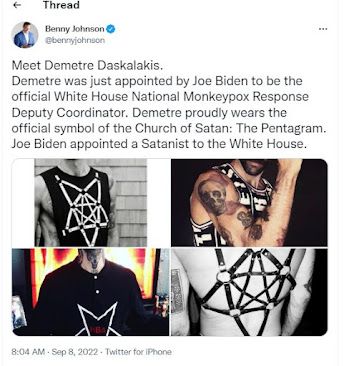 Daskalakis has denied the allegation:

“I am certainly not a satanist,” Daskalakis tells The Advocate. And why do people think he is? “It's because I wear high-fashion harnesses by Zana Bayne,” he cheekily replies. The harness has been making a splash in the fashion world for more than a year now. Also, the pentagram (or really a pentacle, since it has a circle around it) has been around for thousands of years, even predating Christianity. The HIV prevention specialist has tattoos including other iconography, including a more Christian-oriented one. Maybe it’s all about balance?

Also those who are a bit knowledgeable on useless trivia such as pentagrams and the like (yours truly)   were quick to voice their opinions about the inane claim that the good doctor is a Satanist.

Demetre Dasalakis has a tattoo which symbolizes paganism. He is not a Satanist. A pentagram UPSIDE DOWN in a circle is Satanic. His pentagram is right side UP. https://t.co/o7OL3NlHbn

As difficult as it is to believe, the accusation of Satanism against Daskalakis is nothing compared to the other attack on him via the writer of the original Daily Caller piece, Dylan Housman. Apparently Dylan went through Daskalakis's Instagram account and pointed out just how many shirtless pictures he found of the good doctor. It could be said that Housman was attempting to appeal to negative stereotypes about gay men. Maybe. Or maybe not. Unlike so many folks on Twitter, I am not going to pronounce myself an expert on psychological motives behind certain actions. If you catch my drift. 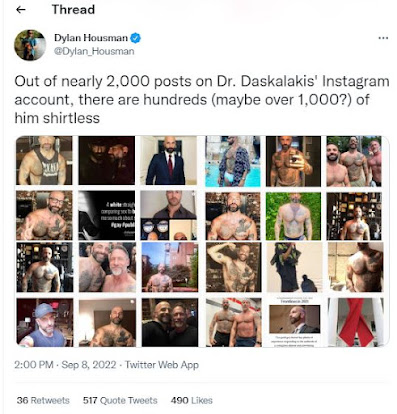 But I will say that aside from the fact that one should ask why does any of this matters when it comes to Dr. Daskalakis doing his job, another good question should be just who benefits from viewing all of those bare-chested pictures of the good doctor? And in what manner do the benefits manifest themselves?

The conservative outrage industry is annoying and infuriating at times. But then comes the golden moments in which it owns itself. This has to rank at the top tier of these moments.

Posted by BlackTsunami at 2:27 PM No comments: