Alabama Court Concludes Hearing on Roy Moore as Commission Charges Chief Justice 'Learned Nothing' - It doesn't look good for anti-lgbt Alabama Chief Justice Roy Moore. This is good for us, but if he is removed, will he attempt to exploit the situation to run for governor? His fate will be known in 10 days.

ID laws may ‘disenfranchise’ 34,000 trans voters - A population of voters not generally thought of in the controversy involving those dreaded ID laws. But a population who can be harmed tremendously.

Haiti LGBT festival cancelled due to threats - So sad. Still more work to do
Posted by BlackTsunami at 3:24 PM No comments:

Transgender and homeless? The religious right doesn't care about you 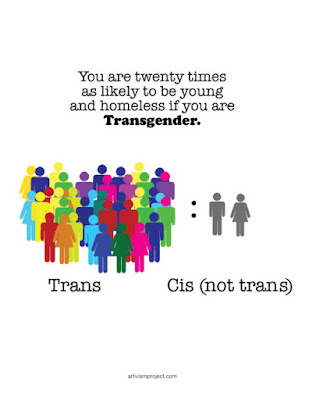 The American Family Association's fake news site One News Now is kicking at the transgender community yet again. But this time, they have chosen a particularly vulnerable segment:


Christian-based homeless ministries are expressing concern over the latest mandate from the Obama administration that allows men to be housed with women.

Housing and Urban Development has finalized and issued a rule that homeless shelters that receive federal funds must allow transgender men to be housed with women in homeless shelters on an equal basis. Penny Nance of Concerned Women for America tells OneNewsNow that her friends in Christian homeless ministries are concerned about the obvious issues of privacy and safety, but there's more.

“Shelters need the freedom to make decisions independently on a case-by-case basis,” she explains. “And any time the federal government takes that ability away from them, they create hazards for everyone involved. At bottom, these are Christian ministries that must stay true to their core values.”

First of all, in spite of the claim that Christian-based homeless ministries are up in arms about this new rule, the article interviews not even one representative from these ministries.  The article is nothing more than an interview with Nance.

In addition, there is no genuine information in this so-called article about homelessness in the transgender community. So allow me to provide some.

According to the National Center for Transgender Equality:

. . . Family rejection and discrimination and violence have contributed to a large number of transgender and other LGBQ-identified youth who are homeless in the United States – an estimated 20-40% of the more than 1.6 million homeless youth. Unfortunately, social service and homeless shelters that work with this population often fail to culturally and appropriately serve transgender homeless people, including denying them shelter based on their gender identity; inappropriately housing them in a gendered space they do not identify with; and failing to address co-occurring issues facing transgender homeless adults and youth.


It would seem to me that a core value of a Christian homeless ministry would be taking care of the homeless, no matter who they may be. And I am betting that this is the case. It's just too bad that One News Now and Nance  are too busy exploiting the false "transgender predatory" meme to genuinely talk about the issue.
Posted by BlackTsunami at 5:10 AM 2 comments: