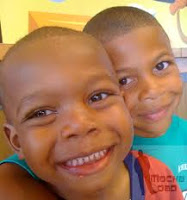 Impact Magazine just ran an awesome story from Rob Waston, director of Partners and Alliances Communication for Hitachi Data Systems and who also blogs at evoL.

The story by Waston talks about his two sons who he and his partner fostered and then adopted. Excellent read through and through. I especially liked this part:

As I look at my sons, I am filled with the awareness of a love for each that I could never fathom in my wildest imagination previously.  The love I have for each is unique, each powerful in its own right, but its own “color” if you will.   Jason is the son of my heart, Jesse is the son of my soul.

Today they act as twins.  Since he is physically bigger, they have decided that Jesse is the “big brother”.  Since he was born four months earlier, Jason has been dubbed, by mutual consent, as the “older brother”.   We do not have a “little brother” in the family.

That is how two little best friends became brothers.  It is how my gay family came together.  We have a unique story, but we are not unique.  All same-gendered parent families have a story.  While my friend at the airport was right, “all ways can be hard”, all ways can also be miraculous, loving and intensely wonderful.

How our families come together is being judged today, and in the next few months.  It will be judged by the US Supreme Court.  Our families are likely to be judged long after that as well, no matter what the results.

And, no matter what the judgments on our value, I will always know the truth.  I know how thoroughly REAL we are.  I live it and I have seen it.


All of the nonsense in the world dragged about by Maggie Gallagher, Brian Brown, and that bunch at NOM can never compete with that.  It reminds one that family doesn't necessarily always come from biological ties.

But those who create families through biological ties and those who don't should never think that their families are in competition with each other. Rather, they are kindred spirit because they both share the ability and desire to love and sacrifice.

And more often than not, that's all you need.

Stunning video! I love it! Okay my lesbian, bisexual, and transgender brothers and sisters, the ball is in your court. I would love to see an equally powerful video created by one of you.

37 Senators Call On Obama To Ban Anti-LGBT Bias By Contractors - So do it already! I'm sure that Obama will as soon as he gets his religious right flame retardant suit ready.

Illinois ‘Family’ Group: Gays Shouldn’t Even Be Teaching, Let Alone Marrying - Some folks really need to get over their homophobia.

Olympic Wrestling Canceled Because Of Gay Conspiracy, Russian Coach Claims - Claiming that gays plotted to eliminate wrestling from the Olympic Games is the single most clueless thing I have heard in a while for so many reasons besides the belief that gay men enjoy watching men in tight outfights slam-bamming each other on a mat.
Posted by BlackTsunami at 9:03 AM No comments:

In the controversy involving Sullivan High School in Indiana and the situation involving the supposed "traditional, no gays allowed" alternative prom, Diana Medley the special education teacher who spoke on the side of those wanting that prom (Medley is not employed at Sullivan High School) has taken a huge amount of the criticism.

Petitions have been passed around asking that she be dismissed, comment after comment have been written about her. And the final indignity? The video above parodies her absolutely vicious comments about gays, particularly gay youth.

The reason for all of the animus directed at Medley is simple.  Think Progress puts it like this:

Of course Medley has the right to her fraudulent, offensive beliefs, but she also has an obligation to the safety and well-being of students that she supervises. As a special ed teacher, she is likely working with students who are already vulnerable to bullying because of their physical, mental, or learning disabilities. By publicly stating that an entire group of students don’t have a purpose in life, she compromises her trust as an educator.


I would also like to add that to many older gays, Medley touched a nerve because perhaps she reminded them of the times they were bullied in school. Perhaps to them, Medley represents the teacher or principal who stood by and let it happen and then afterwards blamed them for their treatment by saying that they needed to supposedly "act normal."

Posted by BlackTsunami at 5:18 AM 3 comments: