Did NOM steal images from the 1963 March on Washington?

After the hell lgbts get from some members of the African-American community who accuse them of "highjacking" the Civil Rights Movement, I hope earrings and wigs are snatched off over this one if it turns out to be a fact.

The following is a picture of the National Organization for Marriage is using to advertise its upcoming march during Supreme Court deliberations of Prop 8: 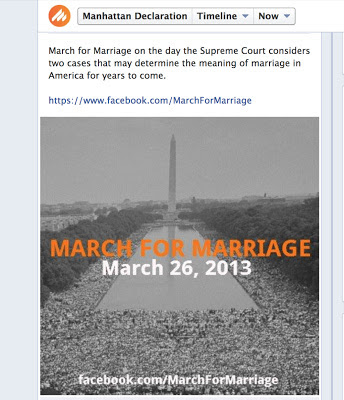 For those who are history buffs, if that picture looks familiar, it's probably because it seems to be stolen from the picture of the original 1963 March on Washington: 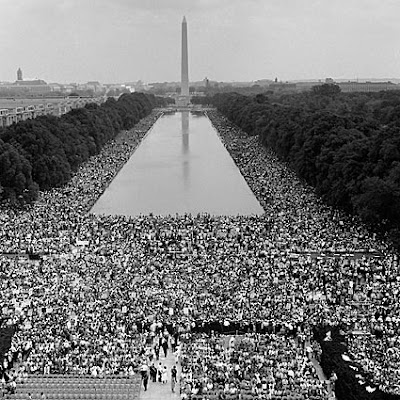 If this is the case, the fact that NOM practically steals the picture for its purposes is just plain brazen.

Almost everyone knows that the 1963 March on Washington was where Dr. Martin Luther King, Jr. gave his famous I Have a Dream speech.

But not everyone knows that the 1963 March on Washington was planned and coordinated by Bayard Rustin, an openly gay African-American man.

Let's break this down -  The National Organization for Marriage seems to have stolen a picture of a legendary march planned and coordinated by a gay man in order to take rights away from the gay community at large.

No wonder Maggie Gallagher left her leadership position at NOM. All of the pandering she could ever do can never cover up the organization's sleaze.

Big hat tip to Jeremy Hooper who spotted the similarities between the pictures.

Posted by BlackTsunami at 2:52 PM 8 comments:

Tennessee ‘Don’t Say Gay’ Bill Now Requires Teachers To Inform Parents If Their Child Is Gay - Actor Samuel Jackson said it best - "This here is some repugnant shit!" So teachers can't discuss the gay community in their classes, BUT they will be required yank in-the-closet gay children out to their parents.

Fred Karger Reports: NOM's Brian Brown Was Paid $500K+ In 2011 - Not when it's so lucrative to attempt to keep the gay community in a state of unhappiness.

Stop what you're doing and leave four messages for Boy Scouts of America (please RT and reblog) - If you haven't contacted the Boy Scouts yet in regards to their anti-gay policy, do it now!

Sandy Rios Warns Gay Rights Lead to 'Fascism' and a 'Lack of Freedom' - That's right. Keep talking. Help us out.
Posted by BlackTsunami at 8:59 AM No comments:

If the Boy Scouts are legitimate with the possibility of doing away with its anti-gay policy, then I applaud the organization.

But in my personal opinion, if the group decides to do away with the policy, I would be very surprised.

The Boy Scouts have been hit with a wave of vulgar comments and disturbing visual images of "predatory gays" taking advantage of children.


If there were prizes given out for most consistent tone of homophobia, Bryan Fischer of the American Family Association would win the majority of them. His usual tone of bigotry has been replaced by a manic-like John The Baptist screech of doom of what would happen to children should gays be allowed to participate in the Boy Scouts.

Believe it or not, however, Fischer doesn't even come close to winning the top prize of homophobia on display.

That award goes to his AFA colleague Buster Wilson who yesterday went on a tangent worthy of Dostyevsky to paint a nauseatingly detailed scenario of  children at the mercy of  so-called evil gay Scoutmasters:

They would be out in the woods for 2-4 days, nights, depending on what time of the year it was. They will sleep in pairs or threes, in sleeping bags, in tents or out in the open. They will shower and wash in the creeks or lakes that outline their camp site. It would be nothing for boys to wonder about with their shirts off, or sometimes just in their underwear or swim suit because they had just been to the latrine or to the swimming hole. These will all be under the direction of the Scout leader who led them there.

Now, you could say that I am setting up a scenario that is just my own. That there are no reports of the kind of activities that my evil mind is conjuring up, that our homosexual friends want nothing more than to lead these young men to maturity and personal growth and I’m evil for believing that such horrible thoughts could actually become reality. But then, I would refer you again, to my friend Bryan Fischer’s latest article where he reminds us all of the Jerry Sandusky story.


Yeah, that's the same Jerry Sandusky who would have been allowed in the Scouts under its current "no gays allowed" policy because he had a wife, children, and as far as everyone knows, has had no sexual relations with an adult male. He is hardly a gay male.

Regardless of how the Boy Scouts decide, one thing is clear.  Whoever said ignorance is bliss is a damn liar.

And it's downright embarrassing when people not only show pride in their ignorance but puts it on public display.