With Donald Trump sick in the hospital from the coronavirus and there not being a consistent message on how he is doing, Americans are divided into two camps when it comes to his recovery.

There are Trump supporters and others who consider themselves to be basically patriotic in wishing for his recovery. On the other side of the spectrum are folks whose opinions range from indifference to wishing him well for while noting his blame for his own condition to finally those who have thrown all caution to the wind in wishing that he suffers as much as possible. Even to the point of death.

I guess I am leaning a bit in the second camp. I do hope Trump recovers, but I also hope that he doesn't gain sympathy for his condition for two reasons. The first reason has to do with how he put himself in this bind because of his own reckless and selfish behavior. He refused to take this pandemic seriously and undermined efforts to fight it.

The second reason has to do with basic cynicism.

But this is the real world. Therefore, instead of desired leadership, we get tripe like this:

The White House Gift Shop is selling a “Donald J. Trump defeats Covid” commemorative coin. You can pre-order it now for $100. https://t.co/aPQ0vNRHB3 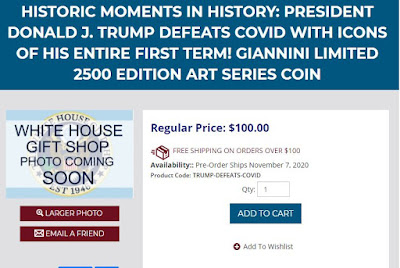 . The idea of selling coins bragging about a "victory" over the coronavirus is extremely tacky and a slap in the fact to the over seven million who are presently infected. And especially to the over 200,000 who have already died.  More than that, it epitomizes Trump's inherent selfishness and basic incompetence. A leader like him makes patriotism so difficult. Even though I hope and pray for Trump's recovery,  I fully understand why others are either indifferent to his health or wishes that he suffers. You simply cannot show any sympathy for someone who will exploit it without any sense of shame.

Posted by BlackTsunami at 5:32 PM No comments: