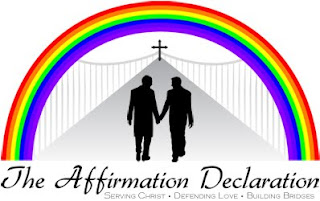 With a lot of attention devoted the Manhattan Declaration, that awful religious right driven hot mess, it's hard to remember that not all Christians are bullheaded individuals who seem to think that the world should rise and set in accordance to their beliefs.

The Affirmation Declaration serves as that reminder:

The Affirmation Declaration is a statement that expresses the convictions of Christians all over the world. It was written in response to the now famous Manhattan Declaration, to correct egregious errors contained in the document, errors that have been preached in the pulpits of many local churches for far too long.

Because of the large number of people affected by this serious issue one way or the other, we felt it expedient to respond formally, both by submitting our Declaration to the drafters of the Manhattan Declaration, as well as by releasing our Declaration to the public, allowing Christians to show their support for love and affirmation, just as so many have shown their support for the propagation of false doctrines of oppression and inequality against the GLBTI (Gay, Lesbian, Bisexual, Transgender, and Intersex) community.

We also desire to let the world know that not all Christians are locked in what we believe to be an ancient worldview regarding homosexuality. We want to give people hope—hope to know that God loves them just as they are; hope to know that their gay loved ones are not destined for Hell; hope to know that although some Christian churches will never accept them or their same-sex unions, a great many will.

May the signatures we garner serve as a fire that will never burn out, lighting the way through the darkness of bad theology, and setting Christ's Church back on the right track as it relates to matters of sexual and gender orientation, and gender identity.

Even if you don't sign it, it's a good thing to remember that there are Christians who still believe in the unconditional love of God.

Yes there were gay cowboys and other Thursday midday news briefs

Cowboy Museum looks at gay and transgender folk in the wild west - I'm a serious history buff and our lgbt community needs to be aware of their entire history. So this is excellent news.

Press Release: Darrell Tucci Elected To GLSEN National Leadership Council - How about some positive GLSEN news instead of all of the lies that have been lately thrown out.

BBC’s Idiotic Polling Question - I hear that the next poll question will be should black men be lynched (that was sarcasm.) 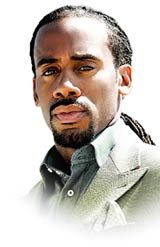 From the National Black Justice Coalition (an excellent lgbt of color organization which we all should support) comes this news about an excellent commentary on the Tom Joyner Morning Show.

The commentary addresses homophobia in the black community (Editor's note - since I have no idea how to embed audio files on my blog, click on the "excellent commentary" link to hear it. It's one of the best commentaries I have ever heard):

We'd like to call your attention to a commentary from yesterday's Tom Joyner Morning Show, from regular TJMS commentator Jeff Johnson.

This brief clip includes commentary on the great lengths some factions went to in trying (unsuccessfully) to prevent Houston's election of an openly lesbian mayor, which leads him to calling out what he sees as a crisis caused by the African American community's unwillingness to be honest about its own homophobia. The clip is less than six minutes long, but in that time Jeff speaks an awful lot of truth to those that may not always want to hear it.

For those that don't know his work, Jeff Johnson is a Washington, DC based journalist, activist and commentator. He is the author of Everything I'm Not Made Me Everything I Am: Discovering Your Personal BEST and is chief correspondent for talk show The Truth With Jeff Johnson.

This clip is an example of the type of dialogue we need - open and honest, and a call to action asking the Black community to "stop being afraid, and start being willing to understand." His willingness and courage in speaking truth to those who may not want to hear it is inspirational, energizing and deserving of our praise.

We as a Black community still have not been willing to have an honest conversation about the fact that we’re homophobic, about the fact that our churches in many cases are running the lead on demonization of homosexuality even when their doctrine speaks to restoration. And so if we want to be serious we’re going to lift up this notion of there’s a problem or theirs a crisis with our down-low brothers — the down-low brothers are leading the AIDS epidemic and we have a problem — but not recognize that you create down-low brothers by having a community that’s unwilling to embrace its own brothers that are gay.

… How can we begin to have honest conversations about the fact that these are our brothers, our sisters, our mothers, our fathers, our sons and our daughters that in many cases are dealing with a crisis of identity in an environment that tells them that who they are is wrong?

I don’t want to argue the theology of homosexuality. I don’t want to argue whether you think it’s moral or not. What I want to deal with is that these are members of our community that needs to be supported. There are young people in schools that are being abused because of their sexual orientation, and we’re turning our backs on it.

Posted by BlackTsunami at 4:19 AM No comments: