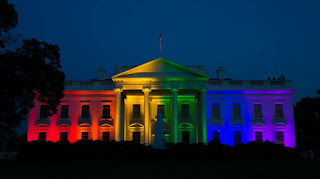 Democrats ratify most pro-LGBT platform ever - THIS happened amidst all of the talk of squabbling and such. And I'm a practical queen.  This is a million times better than the kick in the face the GOP gave us. I WANT this. ALL OF THIS.

Here’s Proof That Policing Trans People In Bathrooms Isn’t Actually About Women’s Privacy - Spin false fears of transgender women being predators while protecting the bull#@!^ of heterosexual men taking photos and videos up women's skirts. What the hell?!!

Group Livid Over Gay Couple On 'Loud House' Voiced By Wayne Brady, Michael McDonald - And it begins. Where the heck were these folks when Bugs Bunny was dressing in drag? LOL

Christian hate group lawyers wrote Mississippi’s blocked anti-LGBT law - Surprise! Or not.
Posted by BlackTsunami at 9:12 AM No comments:

Michelle Obama SLAYS the crowd at the DNC convention


The Democratic National Convention may have opened chaotically but ended last night with a  positive bang. While it certainly doesn't ease the tensions and bad feelings brought about by the primary fight between Sanders and Clinton, it was a wonderful beginning which epitomizes how it's going to take hard work and unity to win in November.

In many ways, that is symbolic of the struggle for lgbt equality. All speeches were wonderful. Sen. Booker set the tone, Sen. Warren brought the heat. And Sen. Sanders brought the passion and spelled out why his revolution goes past primaries, candidates, and petty squabbles. Because it's really not his revolution, but all of ours.

However, the speech which everyone is talking about is the following by First Lady Michelle Obama. The only way I can full get you to understand how good it was is by this video showing its entirety: