I don't think Jeremy Hooper will mind me stealing this from his blog.

You know, no matter how nice Maggie Gallagher and company tries to dress up NOM's rhetoric, when the organization is not successful, it always goes back to basic homophobia and fear tactics such as the following "gays are coming after your children" ad it ran in Rhode Island recently: 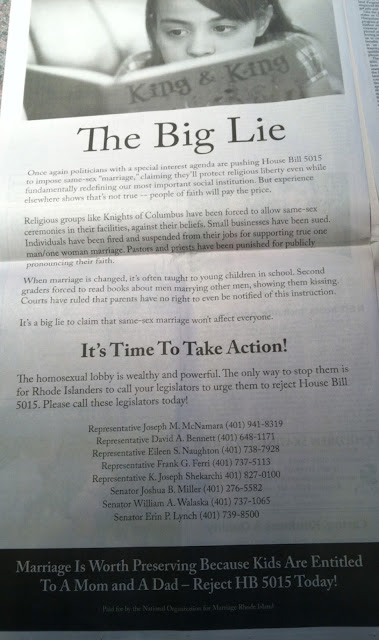 No matter how much sweet frosting you put on manure, it is always manure. But here is the thing that I like. The group in Rhode Island pushing for marriage equality, Rhode Islanders United for Marriage, didn't sit on its ass.

Video: The UK gets its own Kalley Yanta - First the French anti-marriage equality march and now this. It looks like the National Organization for Marriage is branching out in Europe big time. Maybe not necessarily NOM, but whoever is behind NOM.

Religious Extremism On Display At Rhode Island’s Same-Sex Marriage Hearing - This was just vile. And so many errors too. Marriage has not been the same since the beginning of time even if you followed the Bible (who married Adam and Eve for instance?) And I won't even talk about that caterwauling in the hallway of the Rhode Island legislative capitol building. Lastly, you KNOW someone had to work in something about sexual intercourse.

Buster Wilson Warns Obama Might Confiscate Guns of Anti-Gay Activists - What would Jesus do, indeed?

Seattle's Mars Hill Church Moves Close To Gay Neighborhood To Preach To Those 'Infected By AIDS' - You wouldn't have to move to a gay neighborhood for that.
Posted by BlackTsunami at 9:00 AM No comments:

Should 'Christians' have the right to harass gay couples?

The hypocrisy stings when it comes to some folks who call themselves Evangelical Christians.

Most specifically, I mean the folks at the American Family Association's fake news source One News Now.

The news source constantly inundates its readers with anecdotal tales - some true, some extremely spurious - about how some "Christians" in America are picked on or "persecuted" for their beliefs.

But it strangely makes a 180 degree turn when those who call themselves Christians are the aggressors.

In a recent controversy in New Bern, NC, a lesbian couple was eating at a restaurant, The Stingray Café  After they had finished and paid their bill, the owner, Ed McGovern,  handed them a note attacking their relationship.

The note told them that their relationship was hurting their loved ones and that his daughter was involved in a lesbian relationship and it reportedly destroyed her.

According to Think Progress:

McGovern said he wrote the letter because he did not approve of the McPhails’ kissing and confirmed that he has done something similar for a lesbian couple in the past. The McPhails say they weren’t kissing — just holding hands — but that’s besides the point.


One News Now is claiming that the couple is urging folks to boycott the restaurant.  I'm sure if that's true or not. However, they have gone public with a beautifully written piece telling their side of the story:

Lesbians and gays are not monsters lurking among the normal people in your restaurant, monsters from whom you need to protect your children. We are normal people. We have children. Instead of focusing on what separates us, look at what brings us together. With the freedom to speak comes the responsibility to recognize intent, and the responsibility for the effects of your words. What was the intent of this letter? What is the intent of those who single out gays and lesbians to condemn them? If it is to pass on love and compassion, then evaluate how you do so. Writing a letter was a selfish act on his part. Handing a letter to someone you do not know and then washing your hands of the situation so that you can pat yourself on the back for doing "the right thing" is a cop-out. Do you want to spread love? Try a conversation -- not one of attack or analysis but of equal discussion.


However, what if this couple did call for a boycott? Would you blame them?

"The women had the audacity to say that he wouldn't do this to any other married couple. Well, that's because homosexuality is not marriage and they're not really married. The homosexual lobby, you've got to believe, they want to start suing people like this bold Christian man who merely wanted to tell these lesbians that they're in sin."

"Christians needs to support this man -- Christians all over the country -- but especially in this town," LaBarbera urges. "They're going to try to put him out of business. This is the time for Christians to rally around this man who was merely exercising his right to speak out and speaking out as a concerned Christian."


First of all, I don't know where LaBarbera got the lawsuit idea from. The couple did not indicate that they wanted to sue McGovern.

But more to the point, where is the common decency here? Folks like LaBarbera and "news sources" like One News Now are constantly whining that gays are "forcing" people to accept homosexuality.

This couple was merely eating at a restaurant. So what if they were kissing or hold hands. It certainly doesn't matter because the owner took their money.

The unfortunate fact here is that what McGovern, One News Now, and LaBarbera objects to is the couple's existence. It's not enough for them to disagree with homosexuality. They seem to want gays to alter our lives in order to support to their standards of morality.

And if we don't, they should have the right to "correct" us without reprisal because . . . well God said they can.

That doesn't make a damn lick of sense to me.

Posted by BlackTsunami at 5:05 AM 7 comments: