South Carolinians: 'AIDS is not in remission and the funding shouldn't be either' 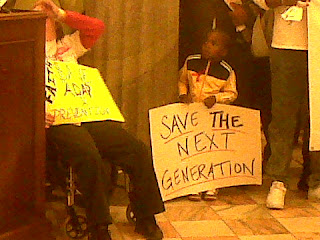 From the Midlands Connection:


The number of people in this state living with HIV and AIDS is on the rise. According to the South Carolina HIV and AIDS crisis task force, more than 14,000 people have the disease. Nearly 25 percent of them rely on government money for medication.

Earlier this week, House lawmakers asked the feds for more than $170 million to fund services for prescription drug programs and the department of disabilities and special needs. However HIV/AIDS was left out of that mix.

"AIDS is not in recession and the funds to fight AIDS should not be in recession either," said Columbia Pastor Andy Sidden.

"Cutting funding for ADAP is like a death sentence for the people who do not have health insurance or can't afford all of their medicines out of pocket," said AIDS activist Jean-Elizabeth Smith.

I was there and was impressed by the numbers who came out in support of the restoration of the funds.  To use a tired cliche, a picture is worth a thousand words: 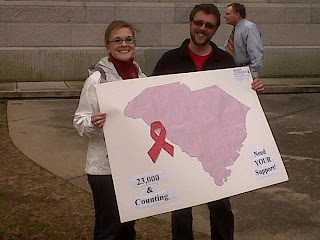 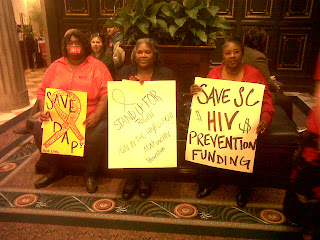 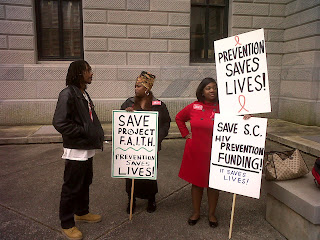 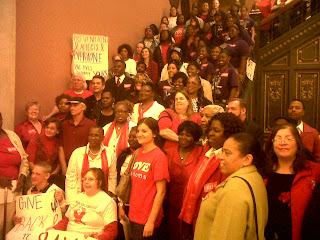 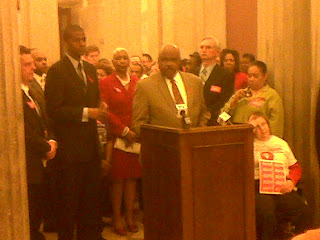 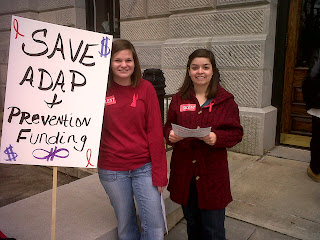 By the way, you will all be happy to know that an amendment has been submitted to restore $2.2 million back into the program. But according to the article, those who gathered at the State House said that until the money is restored, they won't be silenced.

And they shouldn't be either.

Editor's note - the pictures were taken with a Blackberry so I apologize in advance to those not happy with the quality of some of the photos.

Another 'ex-gay,' another scandal and other Wednesday midday news briefs

Not So Ex-Gay “Ex-Gay Leader” Closes Shop - Another "ex-gay," another scandal.

This is a holdup! - Now gays and lesbians are compared to bank robbers.

Medicaid and Social Security changes urged to help gay seniors - Let's not forget about our elderly brothers and sisters.

Dallas Jail Guard Fired Over Anti-Gay Remarks - He said that gays should be annihilated but declares that he is no bigot. No comment because I'm trying to refrain from using "those kind" of words. After all, my mama may be reading this blog.

Posted by BlackTsunami at 9:55 AM No comments:

Peter LaBarbera destroys his own message through his bias

I haven't written on Peter LaBarbera for a while because I've been busy with more pertinent issues.

But its obvious that I've been neglecting my old homophobic friend, especially after his post this morning.

First a little background. The Centers for Disease Control has come out with a press release which says in part:


A data analysis released today by the Centers for Disease Control and Prevention underscores the disproportionate impact of HIV and syphilis among gay and bisexual men in the United States.


The data, presented at CDC's 2010 National STD Prevention Conference, finds that the rate of new HIV diagnoses among men who have sex with men (MSM) is more than 44 times that of other men and more than 40 times that of women.

The excellent resource Box Turtle Bulletin gives a breakdown of the press release which says in part:

HIV and syphilis infections impact certain demographics far more than others. Factors such as race, location, education, and self-worth can have almost as much a factor on one’s likelihood to contract HIV as sexual orientation.

Too often we can read alarming headlines and think, “why fight it, it’s inevitable.” This isn’t true. Most gay men don’t have HIV and never will. And while these frightening statistics can remind us to be careful, they should be taken in perspective.

But leave it to LaBarbera to use the CDC's information as yet another attempt to ramble about "bathhouses," "sodomy," and other things relating to his fantasies about gay sex:

A less bold option might be to levy a heavy “sin tax” on homosexual bathhouses and sex clubs where dangerous, anonymous, “queer” sex proliferates, or — God forbid — actually to shut down these perversion centers as public health hazards. (Instead, “gay” bathhouses like “Steamworks” (right) are flourishing and even offering “Spring Break discounts” to lure young men.)

But one sentence in LaBarbera's ramblings sticks out:

We understand that such ideas are anathema to the “gay”-pandering fraternity of the enlightened who run the country’s incompetent “war on AIDS” — you know, the types who truly believe their own propaganda that “homophobia” helps spread HIV. But the folly of their failed approach is revealed by press releases like that below.

You see, LaBarbera made it a point to re-publish the entire CDC press release under his ramblings and also made it a point to highlight several portions (pertaining to the rates of gay men and disease.) And you will notice the snide comment he made about "the types who truly believe their own propaganda that 'homophobia' helps spread AIDS."

But that is exactly one of the things which the CDC press release (which he re-published) says:


Research shows that a range of complex factors contribute to the high rates of HIV and syphilis among gay and bisexual men. These factors include high prevalence of HIV and other STDs among MSM, which increases the risk of disease exposure, and limited access to prevention services. Other factors are complacency about HIV risk, particularly among young gay and bisexual men; difficulty of consistently maintaining safe behaviors with every sexual encounter over the course of a lifetime; and lack of awareness of syphilis symptoms and how it can be transmitted (e.g., oral sex). Additionally, factors such as homophobia and stigma can prevent MSM from seeking prevention, testing, and treatment services.

When LaBarbera re-published this part of the press release, he made it a point to highlight the first sentence and the portion about syphilis and oral sex.

He didn't highlight the part about homophobia and stigma.

And therein lies his bias. LaBarbera says the concept that "homophobia helps to spread AIDS"  is propaganda but then re-publishes a press release which says in part that homophobia does help to spread AIDS.

I'm wondering did he think no one would see his egregious error or did the CDC report get him so giddy that he lost leave of his senses.

I don't know for sure but I think the words of Box Turtle Bulletin says it best:


When we hear “HIV diagnoses… 44 times that of other men” or “2000 times higher than repeat blood donors”, we have to remind ourselves to step back and take a better look at the numbers. We need to recall that the purpose of information of this sort is to fight the virus, not the people who are infected. And we need to understand that we each are individual and not a statistic.

Posted by BlackTsunami at 4:57 AM 2 comments: