When I read mess like this, I don't know WHY folks think of arch conservative Ben Shapiro as a brilliant mind. There are so many things wrong with his tweet. Can you guess what they are? 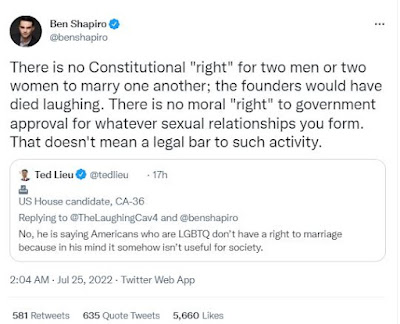 For one thing, if you took Shapiro's argument further, one could say that there is no Constitutional right to interracial marriage. And isn't it strange (or convenient) how people like SCOTUS Justice Clarence Thomas formulates that same argument to use against marriage equality but not interracial marriage.

Could it be because Thomas is in an interracial marriage. That is a point we shouldn't be afraid to continuously make and amplify.

But more to the point, I personally think the Founders wouldn't laugh at the idea of marriage equality. I don't think they would recover from seeing a black president, women voting, etc. etc.  It's rather an inane idea to actually talk about the intent of the Founders. Who cares what they would think? They are, for lack of a politer word, dead.  We shouldn't be ruled by the wishes of deceased men particularly when, in spite of their attributes, they lived in a world of open racism, sexism, and extreme xenophobia.

Lastly, what's all of this nonsense about a sexual relationship. That's underscores the problem with people like Shapiro. No matter how many times LGBTQ people tell and demonstrate, folks like Shapiro are intent on reducing our relationships to that of carnality. It doesn't matter how long we stay together, how many children we raise, or our overall loving family situation. People like Shapiro see LGBTQ couples and they want to do is pigeonhole into matters of sexual intercourse.

They have every right to that opinion. What they do not have a right to do is impose it on us. Our relationships are also about love and commitment. No one has a right to minimize that. None of it. 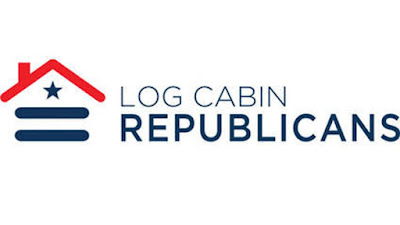 “We failed”: Gay Republicans who fought for acceptance in Texas GOP see little progress​ - My heart bleeds for y'all . . . no it doesn't. You can't get people who hate you to not hate you.
New From AP: Use ‘Accurate, Sensitive, Unbiased Language’ To Cover Trans People - Thank you, Associated Press.
Australia, Europe & Asia host a vast array of LGBTQ leaders. Meet some of them now - Kick ass!
Marriage Equality Bill Could Pass Senate Despite Some GOP Opposition - Chyle, I will believe when I see it.
Posted by BlackTsunami at 8:41 AM No comments: