Nomoredownlow.tv is an excellent series which needs more attention

Nomoredownlow.tv is probably the best online serious you have never heard about. It covers lgbt issues from a people of color perspective. In this particular episode:

Are we under the microscope? Is the media sensationalizing our failed relationships?  Has our quest for equality led to more public scrutiny? In this edition of the award winning web series, NoMoreDownLow.TV, we examine the media’s coverage of African American same gender loving people and their relationships. Then, we’ll also meet Kai, a Transman who made a bold decision to become the person he wanted to be. Plus, we’ll introduce you to Dr. Boogie, one of Hollywood’s most sought after celebrity hair stylists and discover his passion for breading Italian Mastiff Dogs. Co-host Janora McDuffie & Kendell are on location at One National Gay & Lesbian Archives on the campus of the University of Southern California.

Goodbye Pam’s House Blend: after nine years, closing the coffeehouse July 1 - First a little sad news. One of my best buddies and mentors, Pam Spaulding, is retiring her blog, Pam's House Blend. The Blend was one of the most important and powerful voices for the lgbt community and stood on the forefront of how online activism shaped the lgbt community for the positive. On a personal note, Pam was one of the few people who encouraged, guided, and pushed me to be a better blogger. I owe her tremendously.

Are LGBT People ‘The New Black’? - This sounds like an awesome documentary!

To NOM, The Children Of Gay Couples Are Just ‘Accessories’ - Good grief, NOM. Can you get even more mean?

Conservative Group Warns of Divine Punishment for Obama's LGBT Pride Event - Whatever, guys.
Posted by BlackTsunami at 9:04 AM No comments:

Many of us in the lgbt community tend to laugh at Peter LaBarbera of Americans for Truth for good reason. The stridency in which he pursues his obsession to demonize the lgbt community has provided us with some seriously comical moments as well as opportunities to point out just how sad folks on his side of the spectrum are.

But then there are times in which LaBarbera does something which underscores just how also truly vile he is. Take this newest post on his webpage which supports a Russian bill supposedly banning giving any information to children regarding the lgbt orientation. This is how LaBarbera justified the law: 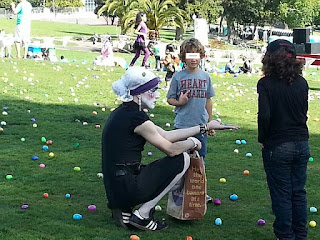 Now under that picture is the caption:


LaBarbera and others who support this madness claim that it provides a "pro-family" perspective and a protection for children. However this is what the law actually does:


Russia passed a bill providing jail terms and fines for anyone convicted of insulting religious feelings, and another bill forbidding homosexuality. Signed by President Putin, the bill says gay rights activists and religion insulters are criminals.
Russia's parliament State Duma has unanimously passed a federal law banning gay propaganda in the course of Kremlin’s push to enshrine deeply conservative values that critics say has already led to a sharp increase in anti-gay violence. The law passed 436-0 Tuesday, with only one deputy abstaining from voting on the bill which bans the spreading of "propaganda of non-traditional sexual relations" among minors. The new law makes it illegal to equate straight and gay relationships, and the distribution of material on gay rights. It introduces fines for individuals and media groups found guilty of breaking the law, as well as special fines for foreigners.

The fact that LaBarbera would push the "protect the children" angle and ignore the other aspects of this awful law simply underscores his dishonesty.  And what makes it so much more insulting is how he exploits an innocent picture of a child with a drag queen in order to exploit fear.  So what if the child is talking to drag queen. Big deal.
I personally prefer that picture to this one below, Nikolay Alexandrovich Alexeyev a Russian gay rights activist,  getting punched during a protest of that awful bill: 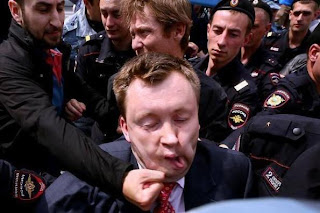 It's kind of telling how LaBarbera distorts an innocent picture to provoke fear and ignores an actual picture which displays end game of the fear that he exploits.

But it also should serve as a reminder. As funny and pathetic as LaBarbera is, we should never forget, while poking fun at his foolishness, just how truly sinister he is.

Posted by BlackTsunami at 4:56 AM No comments: