Homophobic bigotry has no expiration date . . . but neither does truth

The biggest mistake people make when they see wanton bigotry is to say "I can't believe someone believes that in this day and age."  Bigotry never has an expiration date as seen by the tweet below:

Once you realize the Pride Movement is predicated on grooming your kids, you’ll recognize pretty much all children’s content and children’s entertainers are all perverted pedos. pic.twitter.com/HD9VbEkNT8

And just in case this chyle decides to block me or show a smidgen of good taste by deleting the tweet, here a picture of it: 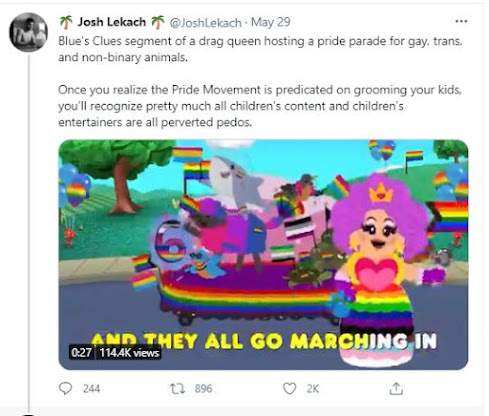 Even decades after arch bigot Anita Bryant claimed that gays go after the young to supposedly "refreshen our ranks,"  some people still think that the LGBTQ community is conducting a thoroughly well-organized plot which involves "recruiting" and "grooming" children (as if we are actually that coordinated and disciplined .. . that was sarcasm.)
It's rather sad if you ask me. All this poor fool has accomplished with his tweet - aside from applause from the choir of usual homophobes - is full scale mockery. Bigotry has no expiration date, but neither does truth. And truth always wins out, even if it takes it time getting to where it needs to be. The trick is to take that truth and ride it roughshod over the lies. Without apology or pity.
Editor's note - check out the wonderful Blues Clues video which sparked the nonsensical tweet
Posted by BlackTsunami at 4:19 PM No comments: