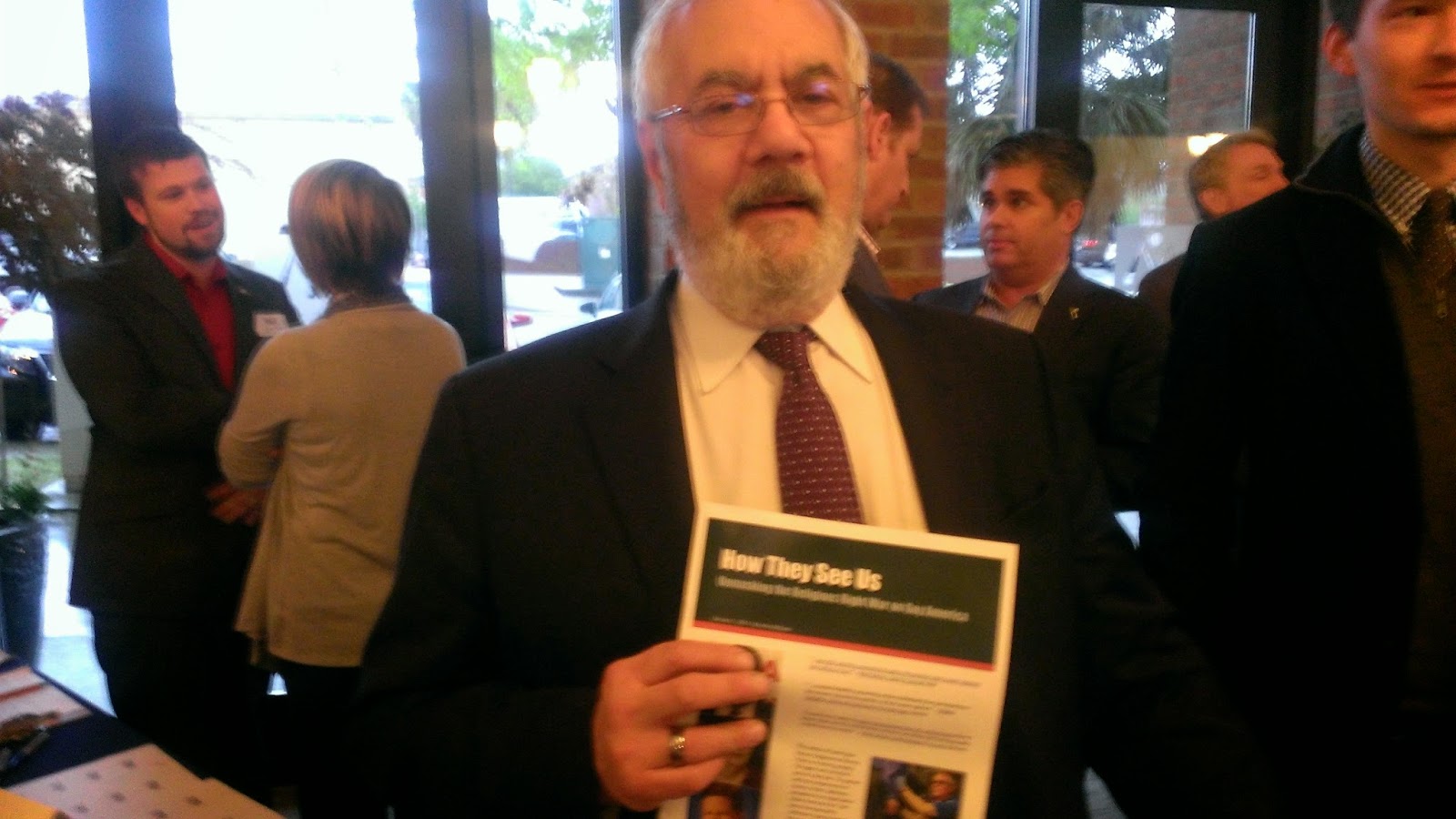 On Monday night, former Massachusetts Congressman Barney Frank was in Columbia, SC attending a fundraiser for SC Equality. I was able to give him a copy of my booklet, How They See Us: Unmasking the Religious Right War on Gay America. He enjoyed reading it and took a copy with him when he departed.

How They See Us: Unmasking the Religious Right War on Gay America has reached over 900,000 readers (direct and embedded). To read it or get your free copy, go here.

If that site is giving you problems, you can read or download it here directly from adobe acrobat.

Let's go for one million!
Posted by BlackTsunami at 6:09 PM No comments:

'What does today's victory at the Supreme Court mean for the lgbt community?' & other Monday midday news briefs

BREAKING: Supreme Court won’t hear anti-gay photographer case - By now, a vast majority of the lgbt community knows of and is celebrating this critical victory but I figure what the heck. Still post it.

What To Make Of The Supreme Court’s Decision Not To Hear That Anti-Gay Photographer’s Case - Extensive commentary and details about today's victory by Think Progress.

SC lawmaker accuses college of 'recruiting' students to be gay - I know what you are thinking. Why am I featuring this post again when it was the featured story on my blog this morning. Because I don't want you to miss it. It's THAT important.

Elaine Donnelly, professional military discrimination advocate: Trans soldiers want to serve so military can pay for surgery - Oh good grief. Give it up, Elaine and show some dignity in defeat.

Dear Andrew Sullivan, 'Left-Liberal Intolerance' Did Not Bring Down Mozilla's CEO - A very important post because of the next one.

BarbWire: 'Al-'Gay'Da' And 'Lezbollah' Terrorists Brought Down Mozilla CEO - Don't you just love the way homophobes think of the cutest insulting names for the lgbt community and then cry foul when they are called homophobes?
Posted by BlackTsunami at 8:59 AM No comments:

SC lawmaker accuses college of 'recruiting' students to be gay

The controversy over South Carolina colleges, gay issues, and the ire of state legislators at colleges for even talking about gays issues show no sign of slowing down.

Earlier this year the House took away $70,000 collectively from the College of Charleston and the University of South Carolina Upstate. The amount adds up to the how much the two colleges spent on the gay-themed books. The legislators claimed that the books, Fun Home and Out Loud: The Best of Rainbow Radio doesn't represent SC community value and were pornographic.

Then it was announced that USC Upstate could face further cuts because the school is hosting a symposium on gay topics that at one point included a lecture titled, “How to be a lesbian in 10 days or less.”

This lecture is a one-woman show by Leigh Hendrix which dealt with coming out. It is considered to be a comical and satirical lecture, but due to the provocative title, some right-wing and anti-gay blogs got a hold of the story and made various inaccurate comments about students "being taught how to be gay."

USC Upstate canceled the lecture because of the controversy this was causing.

However, some lawmakers are still furious over the books and lecture and took it upon themselves to castigate not only USC Upstate but also the lgbt community. One in particular, Sen. Mike Fair, claimed that university students are being "recruited" to be gay:

"It's just not normal and then you glorify, or it seems to me, that the promotion at USC is glorification of same sex orientation,” said Republican state Sen. Mike Fair.

Fair said the school took what he calls questionable behavior even further when it booked the show "How to Become a Lesbian in 10 Days or Less."

“That's not an explanation of 'I was born this way.’  It's recruiting,” said Fair.


So there it is. I wondered how long this controversy would go on before one of our legislators would play the "gays are trying to recruit" card.

Seriously though, I don't think it takes a genius to tell that, in spite of all of his negative comments, Fair has seen the lecture. I also doubt he read any of the books he is all up in arms about. And that goes double for other legislators (in particular Rep. Garry Smith, Sen. Lee Bright, and Sen. Kelvin Bryant) who have run to the media voicing negative comments and making threats.

And to me, the above asinine comment he made about recruiting isn't the worse remark made about this controversy. Fair and many of the other legislators I mentioned complained  on several occasions that the universities are wasting the taxpayer's money by focusing on lgbt issues.

Perhaps a group of SC lgbts should write these legislators asking just where is the "lgbt-exempt" line on our state tax forms.

The legislators represent a sad mindset which is the crux of this entire nonsense.

Lgbts are in loving relationships, we pay taxes, we raise children, we are the important linchpin of many South Carolina families.

But when folks like Fair are pressed to talk about us, they seem to be compelled to perform an insulting psychological dissection on who we are.

To folks like him, the other legislators making a fuss about the colleges, and the right-wing blogs, our sexual orientations disqualify us from being treated fair and equally. Our sexual orientations also frees them to lie about us, bear false witness against us, or treat us like less than taxpaying citizens of this state. Instead, they treat lgbt South Carolinians like clay by molding us into the false images they conjure up about us in accordance to their so-called religious beliefs.

Our families, loving relationships, our close friendships, and even the respect due to us because we also pay taxes are replaced with images of pathetic sinners out to cause chaos and "recruit"  because we supposedly hate values and morality.

And God forbid that we want to talk about issues which affect us like every other group in South Carolina does. God forbid colleges and universities have classes and assignments which acknowledge us. To these holier-than-thou folks, that's akin children playing the Bloody Mary game in front of a bathroom mirror. To them, that's akin to us supposedly shoving our lifestyles down their throats.

It's what I've been saying throughout this mess from the start. Folks like Fair, Bright, Smith, etc want to erase our lives. They don't want to be reminded of who we actually are as people because they seem to think that their inaccurate images should be the beginning or ending of the matter.

But they should remember two things.

Some of those zeros in their legislative paychecks came from us.

And we know how to vote.