Intersection between Christian beliefs and junk science is a dangerous location.

A situation which hardly ever gets discussed when it comes to opposition to gay equality is the bad intersection between Christian beliefs and distorted science.

To some who call themselves Christians, opposing gay equality on  religious grounds isn't enough. Some Christians align themselves in or with "traditional values" groups  and religious figures who have created a body of "scientific work" which supposedly proves that homosexuality in itself is a "dangerous lifestyle" that is indicative of dastardly deeds, sexually transmitted diseases, and an early death.

However it should be noted that this body of "scientific work" is rife with junk science and studies either cherry-picked or taken out of context.

A perfect example is a recent piece by Catholic Online entitled Opposing the Homosexual Agenda: Religious Bigotry or Science and Justice?. The author, Sonja Corbitt, tries to make the case that there are justifiable reasons to discriminate against gays and lesbians. And the research she cites is highly dubious:

A "Review of Research on Homosexual Parenting, Adoption, and Foster Parenting" was done by George A. Rekers, Ph.D., Professor of Neuropsychiatry & Behavioral Science, University of South Carolina School of Medicine, Columbia, South Carolina. It is a well-known review, and in it, Rekers cites numerous national and international studies that revealed:

• Households with a resident homosexually-behaving adult are substantially less capable of providing the best psychologically stable and secure home.

• Households with a homosexually-behaving male contribute to a potentially higher risk of removal due to the sexual abuse.

• A husband/wife relationship is significantly healthier and substantially more stable socially and psychologically.

• The best child adjustment results from living with a married man and woman compared to other family structures.

• Compared to a family without a homosexually behaving adult, empirical evidence and 30 years of Rekers´s own clinical experience with children strongly support the conclusion that a home with a homosexual-behaving individual subjects a child to a set of disadvantages, stresses, and other harms that are seriously detrimental to a child´s psychological and social development.

This review is an extensive survey of many, many studies and their research; the science behind it was used at state levels to guide public policy regarding child custody decisions, adoption, and foster parenting, as well as to defend and uphold laws to this effect in other states and on behalf of the Boy Scouts of America. These laws were upheld by the US Supreme Court.

At first glance, Corbitt's citation of Rekers sounds reasonable. But there are a few facts she omitted.

Rekers, a former professor at the University of South Carolina and a founder of the Family Research Council, has testified against the lgbt community in adoption cases.

In 2004, he was an expert witness in a case involving gay adoption in Arkansas. The state had banned gays from adopting in 1999. In January 2005, Pulaski County Circuit Judge Timothy White ruled against the state of Arkansas. Furthermore, he called Rekers' testimony "extremely suspect." He also accused Rekers of testifying solely for promoting his "own personal agenda."

In 2008, Rekers was also an expert witness in a case defending Florida's gay adoption ban. Miami-Dade Circuit Court Judge Cindy Lederman ruled against the state. In her decision, she said "Dr. Rekers’ testimony was far from a neutral and unbiased recitation of the relevant scientific evidence. Dr. Rekers’ beliefs are motivated by his strong ideological and theological convictions that are not consistent with the science. Based on his testimony and demeanor at trial, the court can not consider his testimony to be credible nor worthy of forming the basis of public policy."

Lederman may have been put off by the fact that Rekers said based on "research,"  a case could be made for banning Native Americans from adopting children.

Loophole Allows Uganda to Execute Anyone ‘Related’ to Homosexuals - Why should anyone be surprised?

House of cards collapsing on opponents of gay soldiers - Yeah but how long will it take for DADT to be repealed?

Independent evaluators concur: Democrats in Congress passed a stimulus bill that really worked - Not necessarily an lgbt issue per se but since folks are riding Obama like a prized pony, I felt the need to put this in.

Posted by BlackTsunami at 9:26 AM No comments: 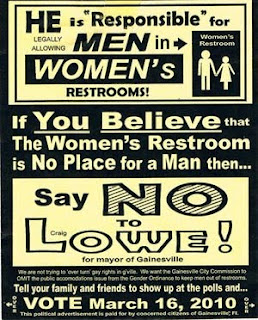 Riddle me this - an organization uses a tactic against a non-discrimination bill which not only fails but fails overwhelmingly.

Should the organization use the tactic again?

Usually an organization wouldn't. But in this case, we are dealing with one of those pesky "traditional values groups."

In Gainesvile, FL, a group calling itself the Concerned Citizens of Gainesville are trying to keep Craig Lowe from becoming Mayor. They have two problems with him.

First that he is openly gay. Secondly that he helped to lead the effort to defeat a repeal of an anti-discrimination law last year. The repeal effort lost by a huge majority (61 percent). And what's more interesting is that supporters of the repeal (the losers) used the tired talking point of how the law would lead to men invading women's restrooms.

If the "bathroom"  tactic didn't work to repeal the anti-discrimination law, then what makes the "Concerned Citizens of Gainesville" think that it can defeat Lowe?

Never mind that Lowe has spent many years in public service, including serving on the Gainesville Commission since 2003 because to them, it's all about the bathrooms..

Those who want to support Lowe's campaign can go here.

Posted by BlackTsunami at 5:06 AM 2 comments: