I still love South Carolina: a love dirge from the pit of a crazy state in the Union

This week, South Carolina’s lgbt community celebrated a huge victory which you probably won’t hear anything about.

Last year state legislators came up with the idea of a bill addressing teen dating violence. It was an excellent idea and a great bill, that is until some legislators wrote in a codicil which would have excluded lgbt relationships, thereby telling lgbt teens that the state of South Carolina really doesn’t care if they suffer relationship violence.

Through quiet tenacity and steadfast devotion, several statewide lgbt groups and their allies caused the bill to die in committee during this legislative session.

From Gov. Mark Sanford’s dalliances on Argentinian soil, to the alleged affairs of possibly soon-to-be governor Nikki Haley, to “Captain Redneck” Jake Knotts, and culminating with the odyssey of Alvin Greene, this state will most likely be single handedly responsible for the Daily Show receiving yet another Emmy for Best Variety Series.

But such is the history of South Carolina. From starting the Civil War by firing on Fort Sumter to pioneering the practice of lawmakers cane-whipping each other in the Congressional halls, this state seems to be bound and determined to designate itself as the insane cousin whom one lets out of the attic at his own risk.

However in spite of how low we sink, many South Carolinians - be they gay or straight, young or old, black, white, Latino, etc - still love this state

And even though the sensible thing would be for a group of us to put on black wigs and sunglasses, get the hell out of town, and tell inquiring minds that we are from the planet Venus, we are determined to hold our heads high even though we continue to be dragged through new controversies by those whom we have selected to represent us.

Why shouldn’t we? It’s like a circus down here.

In 2004, Gov. Sanford brought two pigs to the State House to express his displeasure in the overriding of his vetoes. And the pigs “expressed” themselves all over him.

He was re-elected with over 50 percent of the vote.

And I won’t even mention the late Strom Thurmond except for to say that when many South Carolinians displayed shock over his secret African-American daughter, we were just pretending.

Basically, us sensible folks down here have come to the conclusion that South Carolina is not a state, but a Fellini movie. Therefore it’s best to grab a few balloons and either join the parade of bizarreness or just watch it go by.

Besides, some of us don’t look exactly fetching in black wigs and sunglasses.

Posted by BlackTsunami at 4:50 PM 2 comments: Links to this post


"If I was in a drugstore and some guy opened the door for me, I'd rip his arm off and beat him with the wet end."

And yes this is the SAME wedding where Elton John played. Perhaps Elton got away unscathed because he didn't hold open the door for Hutcherson.

If Gays Can Serve Openly In The Military, God Will Cause Us To Lose Wars - I'm speechless. Sometimes you have to let ignorance stand on it's own.

ENDA Vote in Question - You really didn't expect for it to be that easy, did you? 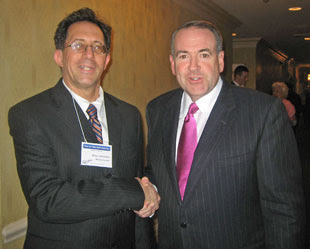 According to People for the American Way, Mike Huckabee will be receiving an award from the organization called Vision America for being "A National Hero of Faith."

In the three plus years I have been blogging, I don't think I have ever talked about this group, so I looked up some information.

According to the Southern Poverty Law Center, Vision America is one of those dreary groups forever talking about how Christians are being persecuted while dreaming up new ways to vilify the lgbt community. Apparently at a conference in 2006:

. . .No fewer than 18 presenters railed against homosexuals and the "gay agenda." It seemed that the speakers, many of whom were ostensibly there to talk about the virtues of a Christian nation, just couldn't help but take repeated swipes at gays and lesbians.


Setting the tone was Vision America's head, Rick Scarborough, who said at the start that he is "rushing his efforts to stop the homosexual agenda" that he sees as the key threat to America. Complaining that his audiences are graying, Scarborough emphasized that "we have to reach the next generation" before it's too late.


If the anti-gay event had a centerpiece, it was the well-attended panel, "The Gay Agenda: America Won't Be Happy." The discussion there featured homophobic rants from leaders of four bitterly anti-gay groups -- the Family Research Council, the Illinois Family Institute, Mass. Resistance and the Traditional Values Coalition.


Peter LaBarbera, head of the Illinois Family Institute, called homosexuality "disgusting." LaBarbera, who "investigates" this lifestyle by hanging out in gay chat rooms, insisted that good Christians must "stand up to homosexual aggression" and stop using "that hoary euphemism" -- "sexual orientation." He called for the repeal of all "sexual orientation laws" -- laws that ban discrimination against gays -- because they violate religious freedom. He demanded the closing down of all "homosexual establishments." And he spoke of the "need to find ways to bring back shame to those practicing homosexual behavior."


Another panelist insisted that gays were trying to get legislation passed to allow sex with animals. "One bill in Massachusetts takes away all the penalties for bestiality," Brian Camenker of Mass. Resistance, an anti-gay group in the only state that has legalized gay marriage, claimed. "This is where this agenda is going."

Speaking of Brian Camenker, he is the man in the picture with Huckabee, which taken at another conference. His organization, Mass Resistance, is an anti-gay group as designated by the Southern Poverty Law Center.

And if we are to believe Camenker, Huckabee is on their email list.

This little fact is ironic seeing Huckabee's modus operandi when it comes to the lgbt community. Unlike Camenker (and LaBarbera and Sprigg),  Huckabee isn't all fire and brimstone. He practices a more passive aggressive game but I think it's an act on his part.

Huckabee's nastiness towards the lgbt community has a way of coming through such as:

earlier this year when he attacked lgbt familes by comparing them to people raising puppies,

or last when he bent over backwards (pun intended) to assure Ann Coulter that he wasn't "pro-sodomy" - which really isn't a bad thing. Any thoughts of Huckabee in a sexual situation is enough to make me convert but don't tell PFOX,

or how he consistently aligns himself with members of anti-gay hate groups, such as Camenker.

When trying to deal with Huckabee, it is always good to remember that the most dangerous forms of ignorance and hatred are those which are wrapped in a soft glove.

Posted by BlackTsunami at 4:50 AM 2 comments: Links to this post