Trans Netflix Staffers Call Company Out, Quit Over Dave Chappelle​ - I am impressed. These folks are making a huge stand.
A teen was beaten for carrying the pride flag at school. His classmates support the bully. - This right here is why our fight for equality must continue. This is awful.
A New York Times article proclaiming “Homosexuals Proud of Deviancy” is resurfacing online - A bit of history we should never forget.
Dave Chappelle can kiss my black gay ass - Speaking of the first item on this list,  my Tuesday post about the controversy has been viral for several days. I got some compliments about it. But also some rude statements, one of which you can read below. It's hilarious how some people have accused me of trying to 'cancel' Dave Chappelle. Nope. I don't do that sort of thing. But I won't sit for myself and my being people disrespected, degraded, or erased.
So some folks - like the deluded child below - should get over themselves: 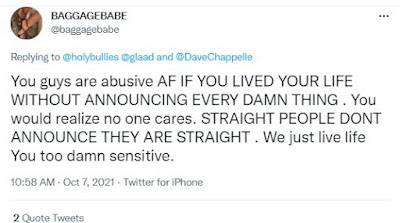