Tony Perkins of the Family Research Council is again exploiting The Holocaust:

Back in June, Tony Perkins of the Family Research Council said that gay rights advocates are “going to start rolling out the boxcars to start hauling off Christians,” and yesterday he agreed with a caller named Janet who predicted on his “Washington Watch” radio show that anti-Christian violence will erupt in America.

After the caller wondered if we are “going to find ourselves being loaded in cattle cars like it was when the Nazis took over before we realize we are in such terrible danger,” Perkins hailed her claim as an “excellent point.” “You’ve just hit the nail on the head,” he exclaimed, warning that “isolationist” and “libertarian” politicians like Rand Paul are leaving America’s national security vulnerable and that violent anti-Christian persecution taking place in the Middle East could soon find its way here.


So apparently Perkins has changed his mind. It's not gays who will cause an anti-Christian Holocaust. It will be folks like Rand Paul. Give him another month and he will be blaming Neil Patrick Harris's Tony win for Hedwig and the Angry Inch.
Posted by BlackTsunami at 2:42 PM No comments:

Video: TX anti-gay activist claims folks are fleeing our nineteen marriage equality states - So an anti-gay claim that folks are fleeing Massachusetts because of "gay marriage" has been proven to be inaccurate. Do these folks say anything accurate?


OOPS: Woman Realizes She’s Starring In Ex-Gay Therapy Video, Doesn’t Support Ex-Gay Therapy - Remember that 'ex-gay group re-branding video with the attractive woman a while back?" Not only has it been taken offline but the woman who starred in the video has condemned NARTH, the group behind the video. Apparently she was misled about the subject and does not like 'ex-gay" therapy at all.

PHOTOS: Ugandans Defy Government Intolerance To Hold Gay Pride Rally - If Matt Barber, Todd Starnes and company want to see dignity and bravery while under actual persecution, they should look at these courageous folks in Uganda. I cannot express enough PRIDE that I feel when l look at these pictures.

Christian publication combines paranoia, racism, xenophobia, and homophobia in vile mix - Why am I republishing this post from this morning? Because I'm proud of it and feel that more folks should read it.

Catholic high school chooses to keep openly gay coach Nate Alfson - Finally a little bit of happiness through all of the madness.
Posted by BlackTsunami at 9:04 AM No comments:

For a while now,  arch anti-gay spokesperson Matt Barber of Liberty University has run an online publication, BarbWire.

BarbWire supposedly gives news and opinion from a  Decidedly Biblical Worldview. However, I think there should be a closer look at what Barber considers a "Biblical worldview" . . . and not just by lgbts.

Of course mimicking Barber himself, the publication is viciously anti-gay, running articles and opinion pieces such as:

Latest Examples of the Undeniable Link Between Homosexuality and Pedophilia

and running pictures such as the following to accompany articles labeling lgbts as the "Gaystapo": 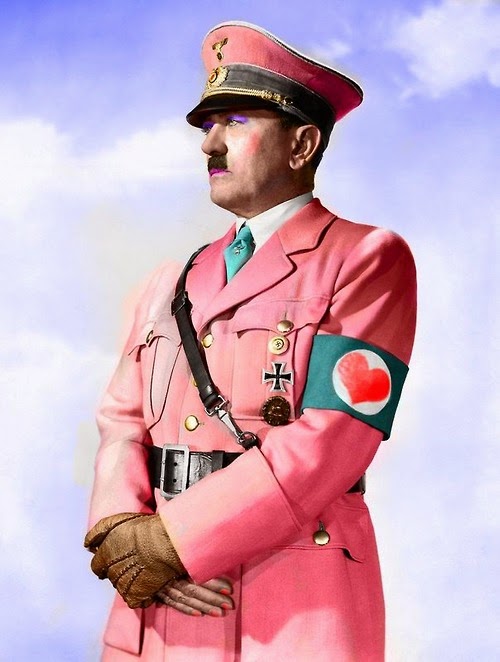 However, BarbWire dabbles into xenophobia, racism, and conspiracy theories.

Read more »
Posted by BlackTsunami at 5:05 AM 2 comments: