There are times when anti-gay groups and spokespeople are their own worst enemies. Just give them a platform and watch them undercut their claimed beliefs in morality and fairness.

Take for example, the court case in Kentucky involving Kim Davis, the clerk who says she will not give out marriage licenses to same-sex couples because of her religious beliefs. The judge is expected to rule in August but that didn't keep her attorney, Roger Gannam from the Liberty Counsel, from speaking to the American Family Association's fake news site, One News Now.

And his words about the gay couple seeking to marry does wonders to illustrate the animus which led anti-gay groups and their supporters to lose in their fight against marriage equality:

"We were able to see through her testimony that this case, more and more, is really about the plaintiffs wanting to force Kim Davis to issue a marriage license despite her sincerely held religious beliefs," the attorney explains. "It's not about the plaintiffs' desire to get married."

Kentucky law stipulates that marriage license applicants can get a license in any county – so the plaintiffs could have driven a short distance to obtain the license elsewhere. As Gannam points out, they were certainly willing to put out extra effort to go to court Monday.

Gannam argues that the case is about "crushing dissent" and forcing Christians out of public office.

And there we go again with the ridiculous notion that our desire to marry is actually a part of a nefarious plan (which by the way, I have yet to get the memo about) to silence people against marriage equality and keep "Christians" out of public office.

I could say a lot about Gannam's ridiculous conspiracy theory and how his appropriation of the term "Christian" (as if to say that lgbts cannot be Christians) insults me.

But I would rather talk about his callous comments regarding the same-sex couple.
Read more »
Posted by BlackTsunami at 3:24 PM 2 comments: 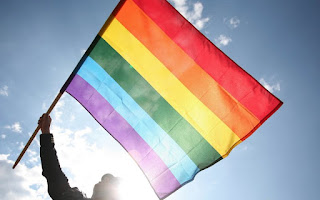 The Global Backlash To America's Gay Rights Triumph - This makes me sicker than words can express. American anti-gay groups and figures know that they have lost the so-called culture war in THIS COUNTRY  so, like bullies, they peddle their crap overseas to victimize the religious beliefs and ignorance of other countries, thereby leading these countries to terrorize their own lgbt citizens. What's the solution? Knowledge. Yes. I am peddling my free booklet here but I want to express more than that. We are a slack community in demanding accountability from our journalists, newspapers, and magazines. We yawn and make jokes while the lazy folks in the Beltway media copy and paste talking points about anti-gay groups supposedly protecting "religious liberties" and we don't demand something more when the latest faux journalist or think tank  publish another collection of  deliberate and badly researched trash masquerading as a book pushing the false notion that progressive folks are "intolerant" to those supporting supposed "evangelical beliefs." We do nothing even we know that they are lying. We don't demand better accountability even when we know that they are lying. We don't demand truth even though we know that they are attempting to omit their extensive history of scapegoating our community. Why? Because we think we are winning. Mythology tells us that in the Trojan War, the Trojans were defeated because they let their guard down when they thought they had won. What we do as the American religious right instigates persecution against our brothers and sisters overseas is OUR Trojan War moment.


Sweeping Federal LGBT Rights Bill Will Be Introduced This Week - Now this is good news. It may not pass, but that's not the point. We are showing that we are at the gate and we won't leave until the door is open, whether it is opened peacefully or we push it in.

This Woman Is Stuck In An Iowa Jail Simply Because She Is Transgender - I read the story. It is accurate and IT IS A HOT MESS!

After Losing On Same-Sex Marriage, Conservative Christians Find A New Enemy - Guess what. The religious right's support for "religious freedom" only means the freedom to believe what THEY believe.

Pat Robertson: Gay Marriage To Legalize 'Love Affairs Between Men And Animals,' Pedophilia - You just KNEW someone would tie those bogus anti-Planned Parenthood "expose videos" to the lgbt community.

Gay Priest Fired From Chaplain Job Asks Pope To Meet LGBT Catholics In U.S. - One of my new heroes.