The campaign for Proposition 8, California's 2008 voter-approved ban on same-sex marriage, is facing a $49,000 fine for allegedly violating campaign disclosure laws during the 2008 election.

California's Fair Political Practices Commission  proposed the fine after an investigation revealed that ProtectMarriage.com - Yes on 8 failed to properly report over $1 million in campaign contributions.


[Yes on 8] failed to report $1,169,292 in contributions under the timelines required by state law, including $508,150 in late contributions of $1000 or more given in the final days of the campaign. It also found that the committee failed to identify the donor behind a $10,000 wire transfer.

ProtectMarriage.com - Yes on 8 faces 18 counts of violating state political laws. . The group has agreed to both the violations and the fines, but the commission will meet to determine an appropriate recommendation on August 16.

It couldn't have happened to a nicer bunch.

Posted by BlackTsunami at 2:51 PM 3 comments: 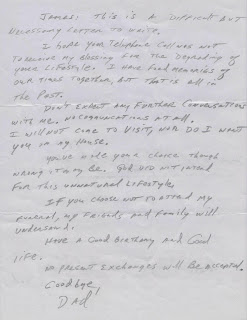 This is What Hate Looks Like: Father Cruelly Disowns Son for Coming Out - Peter Sprigg of the Family Research Council and the rest like to claim that it is the gay orientation which leads to negative behaviors such as drug and alcohol abuse. Of course they never tell you that it's letters like the above one which really leads to such mess. It's a heartbreaker and the sad thing is that so many lgbtqs have a story like the letter tells.

The dangerous new idea NOM is pushing to defame pro-equality voices - This madness is ludicrous on so many levels including the fact that President Obama had nothing to do with the Chick-Fil-A controversy. But who cares about truth when a lie can carry you so far.

Joseph, Montana Gay Man, Allegedly Beaten Outside Club On His Birthday - Ugh. I hate stories like this.

Hate Group Encourages Parents To Pull Kids From Classrooms Of LGBT-Inclusive Teachers - Give me a break, people!

Tea Party: Has Obama Been Hiding He’s Gay And Was Married To A Man? - That is one heck of a drug these people are on!

Posted by BlackTsunami at 8:53 AM 2 comments:

This is last week's press conference featuring the Coalition of African-American Pastors, the phony group working with the National Organization for Marriage to get Mitt Romney elected.

Of course neither CAAP nor its president, Rev. Bill Owens, will tell you that. They will say that they are attempting to get President Obama to take back his support of marriage equality. If he doesn't, they say, then CAAP will begin a campaign to persuade African-Americans to withhold our votes come November.

Not vote for Romney, mind you, but withhold our votes. Of course if the Black community withholds our votes, then that will ensure Romney being elected.

Of course CAAP won't tell you that its president, Owens, is working with NOM as its liasion to black churches.

Nor will CAAP tell you that NOM has already endorsed Romney.

Nor will CAAP tell you that its recent effort is a part of a strategy by NOM to create a wedge between the black and gay community (two strong Democrat constituencies) over the subject of marriage equality with the expressed intent of "sideswiping President Obama."

Anyone believing that this is a genuine effort to express anger over President Obama's support of marriage equality is sadly mistaken.

And as the following clips (which were conveniently omitted from NOM's video of the press conference) demonstrate, this effort is also fueled by hate and ignorance:

And listen to how Owens behaves when a reporter asks him a question about the "Biblical definition" of marriage:


Hat tip to Jeremy Hooper for the videos.

Posted by BlackTsunami at 5:08 AM 3 comments: