Bryan Fischer fired from the AFA!

Bryan Fischer has been fired from the American Family Association!

Details are sketchy and we don't know what the firing entails, but it looks like the entire incident has to do with a trip to Israel which would have included 60 members of the Republican National Convention scheduled from Jan. 31 to Feb. 8. The trip was going to be paid for by the American Family Association.

And the trip probably would have flown under the radar except for the watchful eye of the Southern Poverty Law Center.

According to Media Edge Network:

In a letter dated January 14 to RNC offices across the country, SPLC President Richard Cohen reminded RNC members of the AFA's extremism and its demonizing attacks on minorities.

"Given the AFA's public statements - including the false contention that gay men were responsible for the Holocaust, an idea undoubtedly offensive to Israelis - political leaders should not lend the prestige of their office to this event or to this organization," Cohen wrote.

Cohen's letter goes on to outline several of Bryan Fischer's (director of issue analysis and spokesman for the hate group) more outrageous anti-LGBT and racist statements including his support of Uganda's "kill the gays" bill and his statement that African Americans "rut like rabbits."

"Given that the disease of anti-Semitism is flaring throughout the world, we certainly understand your desire to show your commitment to Israel at this time," Cohen wrote to RNC members. "But accepting funding from an extremist group like the AFA would make a mockery of that commitment and legitimize its extremism."

According to the Israeli news agency Haaretz , of the 168 RNC members invited, more than one-third accepted.

Haaretz also notes that Fischer and Tim Wildmom, president of the AFA, as well as the group's external public relations representative, did not reply to multiple requests for their response to SPLC's statements.


However, according to Maddow, AFA did respond today:

Maddow quoted AFA President Tim Wildmon as dismissing Fischer as “just a talk show host” who is no longer associated with the AFA. When asked specifically what bothered him about Fischer, he cited “the soundbite quotes, you know, the Hitler and the homosexuality one… we reject that.”


That would be a bizarre explanation by Wildmon, seeing that Fischer was, before today, AFA's Director of Issues Analysis. And as for AFA's "rejection of Fischer's rhetoric, just when did that begin? Fischer has been saying wildly inane things ever since he was hired by the organization (see video below)

In 2010, SPLC  designated the AFA and several other religious right organizations as hate groups due to their dehumanizing and bigoted rhetoric against the lgbt community.

In the case of the AFA, SPLC has on several occasions pinpointed the rhetoric of Fischer as a main reason why it considered AFA to be a hate group:

Since joining the AFA as director of issue analysis for government and public policy, Fischer has used the group's website and its radio network to promote outrageous and false claims about LGBT people, Muslims, Native Americans and African Americans. Despite Fischer's extreme views – like blaming gay men for the Holocaust, calling for the criminalization of homosexuality, and calling for the banning of Muslim immigration to the U.S. – prominent conservatives continue to appear on Fischer's radio show.


In this particular case, it is beginning to sound as if  SPLC was able to get the media in Israel buzzing about AFA and Fischer before the trip began, thus creating a possibly huge embarrassing incident not only for  anti-gay group but also the Republican National Convention.  And that may have been the thing which cost Fischer his job.

Headlines in several Jewish and  Israeli newspapers read as such:


As I said before, details are very sketchy but until the entire story comes out, let's all take a look at the rhetoric of  one Bryan Fischer when he WAS employed by the American Family Association:

UPDATE - According to The New Civil Rights Movement, Fischer's replacement isn't any better:

But, and there are many buts, there is much more involved in this story, including the fact that Fischer's de facto replacement is David Lane, the head of the American Renewal Project, which is housed in and funded by the American Family Association.

Lane is so toxic that an op-ed he wrote for World Net Daily, the same site that regularly claims President Barack Obama is gay, was so offensive it was actually removed from the site.

Posted by BlackTsunami at 7:34 PM 3 comments:

Will the lgbt or mainstream media seriously tackle anti-gay propaganda before I reach the social security age?

It is my hope that one day in the not so distant future, the overall lgbt and mainstream media will take a look at the anti-gay propaganda spewed out by so-called morality groups and their spokespeople (i.e. the Family Research Council, the American Family Association, the National Organization for Marriage, etc)

. It is also my hope that the overall lgbt and mainstream media analyzes how this propaganda plays a major part in exploiting religious beliefs and justifying any action which designates lgbts as second-class citizens 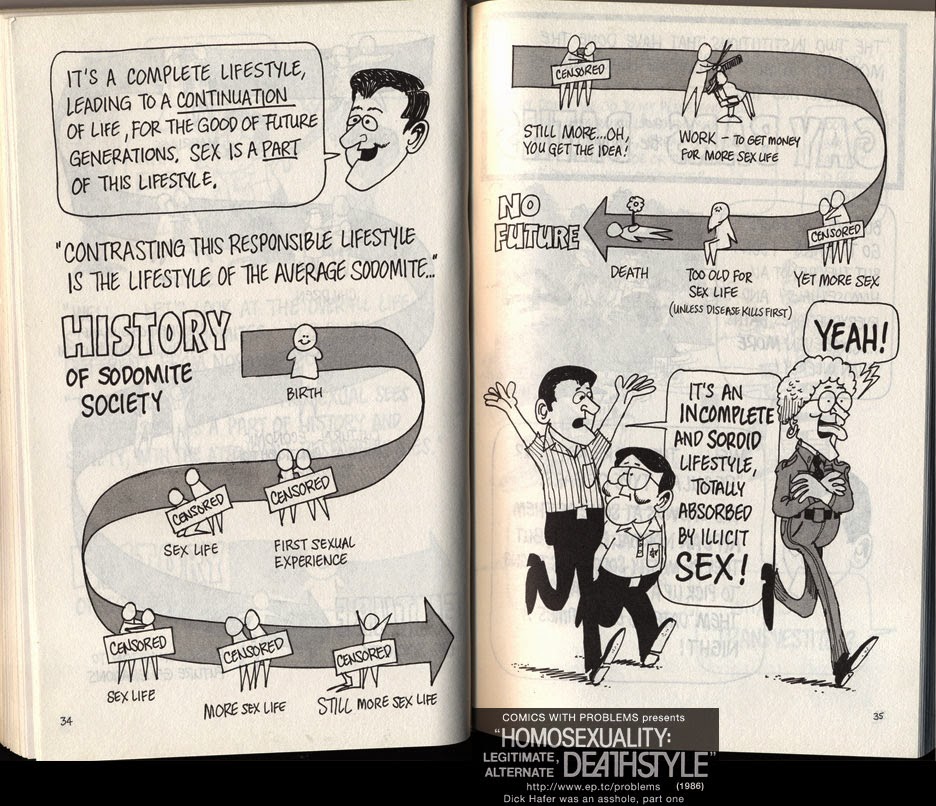 No matter how blatantly or subtle it's put out there, ugly propaganda about the lgbt community plays a huge role in galvanizing folks against us.  And it's time the lgbt community demanded serious attention paid to it in a manner which would put those organizations and spokespeople who uses it on the defensive (for a change).

Until that time comes, enjoy another look at my free booklet, How They See Us: Unmasking the Religious Right's War on Gay America. At the very least, it's a start.

If you cannot download it via the embed from Scribd, feel free to download your copy from here or here.

How They See Us by Alvin A. McEwen
Posted by BlackTsunami at 3:15 PM 1 comment:

'I Don’t Hate Anybody': Rep. Sally Kern Defends Her Three Latest Anti-Gay Bills (Video) - Sally Kern, the notoriously anti-gay Oklahoma legislator attempts to defend her three latest anti-gay bills. Her defense leaves me with only three explanations with regards to her homophobia  Either she is a religious right fembot - you know like the kind who fought the Bionic Woman in the 1970s tv series. Or at some point in her life, someone tied her down, held open her eye,s and made her watch those God-awful anti-gay "documentaries" they used to show in the 80s for a 24 hr period until she became totally indoctrinated by them. Or the safe and rational explanation. Kern is representative of the dangers of anti-gay propaganda in the hands of anyone with any shred of power over people's lives.


Organizers Of Gov. Jindal's Prayer Rally Retroactively Try To Cover Up Cindy Jacobs' Endorsement - And with this very quiet backslide which they hope no one will notice, the organizers of Bobby Jindal's recent prayer rally suffers a huge embarrassment.

Rafael Cruz warns Christians: ‘God will hold you accountable’ if transgender people use public toilets - You know, I don't want to talk about anyone's father even if it is Sen. Ted Cruz (who I really can't stand in the first place) but DAMN!!!!

Why The Mormon Church Deserves No Credit For Supporting LGBT Protections (At Least Not Yet) - The Mormon Church's possible change of attitude has been talked about for the last two days, but as the article notes, let's not be so quick to trust it as of yet.

When I began this blog, I was big on catching anti-gay groups when they lied about studies or used junk science against the lgbt community.

I've noticed - and I hope you have too - that a lot of them don't rely on those falsehoods as much as they used to. I am hoping that future generations will credit this blog for spooking them out of that habit.

But anti-gay groups can still go for the false theatrics. Take the Family Research Council for example. The organization's president, Tony Perkins, sent out this hair-raising message:

Unelected judges and a handful of lawyers have been pushing state marriage amendments over like sleeping cows. Meanwhile, stunned Americans have struggled to make sense of a legal system that puts its own political agenda ahead of the expressed will of the people. Like most conservatives, FRC has watched in horror as the courts have robbed tens of millions of Americans of their voice on an issue of critical importance -- not just to our nation's stability, but to its very survival.

So this idea that Americans are wringing their hands across the nation at the success of marriage equality is yet a lie in the Family Research Council's arsenal of deceptions and misdirections.

Another arsenal of FRC - and this isn't simply a weapon of FRC alone - is when they deliberately blow situations out of proportions to make it seem that marriage equality is creating a sort of last siege of the Alamo when it comes to the freedoms and rights of some evangelicals.

A wedding photographer breaks a contract because she finds out that the couple is gay and in FRC's hands, she is transformed into Joan of Arc three seconds before the first torch is added to the stake.

A cake decorator refuses to bake a cake for a gay couple even in a state where marriage equality is not yet legal, the Family Research Council parades her in front of a boardroom panel, where she sheds a few tears because of the situation which is clearly HER fault. Suddenly she becomes Mildred Pierce two seconds after her ungrateful, bratty daughter Veda slapped the color out of her cheeks.

And the worse is when the Family Research Council and their ilk create these new phrases  which bombard the airwaves.Phrases such as "religious freedom" or  "religious liberty."

Take out the essences of God and Jesus and the phrases and words become less palpable, but more familiar. They become words like "segregation," "discrimination," "homophobia," entitlement."

It's all a game created to play upon people's fears, religious beliefs, and self-righteousness which all  come from the belief that their religion places them squarely in God's favor above the so-called rabble.

The sad thing is that FRC is really good at playing the game. Worse than that, the folks they are exploiting practically beg to be taken advantage of.

Ambulance chasing for Jesus can be quite lucrative.