From the Family Research Council:


. . . the Pences are not strangers to the other side's viciousness. Every time the media is reminded about the family's faith, they become hysterical all over again -- a scene that played out this week when Karen announced she'd be volunteering at Immanuel Christian this spring. "I am excited to be back in the classroom and doing what I love to do," she said in a statement. "I have missed teaching art, and it's great to return to the school where I taught art for 12 years."

She can't go back there, LGBT activists raged! They reject homosexuality! Yes, well, that's what orthodox Christian schools do. (Not to mention Jewish and Muslim ones too.) Would it have been headline news if Jill Biden taught at a Roman Catholic school? Probably not. Yet, the Left and their media chums are hurling profanity at the Pences for something that, even five years ago, wouldn't have been controversial. Frankly, the only thing that would have been shocking is if Karen worked at a Christian school that didn't act like a Christian school.

CNN's Kate Bennett was just one of the talking heads who doesn't get it. "So, lemme get this straight," she tweeted, "the second lady of the United States has chosen to work at a school that openly discriminates against LGBT adults and children?" "So, lemme get this straight," Ben Shapiro fired back. "You're a reporter but you've never heard of religious people before? 'BREAKING: Pence's wife is working for a Christian school that requires that Christian students pledge to abide by Christian standards of sin that have not changed in 2,000 years.'"


Well of course, the  Family Research Council, an organization designated as a hate group by the Southern Poverty Law Center because it routinely:

falsely claims a link between homosexuality and pedophilia,


thinks that 2nd Lady of the United States Karen Pence is being subjected to "religious discrimination" when people call her out for choosing to teach at a school which discriminates against LGBTQ adults and children.

The Family Research Council's brand is all about undermining LGBTQ safety and equality via lies while hiding the veneer of religion. Of course Mrs. Pence's actions aligns with its values.

THAT is the problem. The 2nd Lady of the United States has no business acting such a manner that she has to be defended by groups which specialize in bigotry.

Related post: Karen Pence's homophobia is bad. The homophobia of her defenders is worse

Karen Pence's homophobia is bad. The homophobia of her defenders is worse

As to be expected, 2nd Lady Karen Pence's decision to teach at an anti-LGBTQ private school has some defenders.

Personally, I and a lot of other folks feel that seeing that she is 2nd Lady of the United States, Mrs. Pence has a responsibility and duty to send an inclusive message to all Americans, especially LGBTQ Americans, our families, and our children. And aligning herself with a private school with a policy against LGBTQ employees, same-sex families, and LGBTQ children is not the way to do it,

However, some folks in the comments section of a One News Now article (which is the "news source" of anti-LGBTQ hate group the American Family Association) have a different take on the situation (click on the graphics to read):

And those comments are nothing compared to the comments on the extreme right-wing site Free Republic:

Read more »
Posted by BlackTsunami at 12:16 PM No comments: 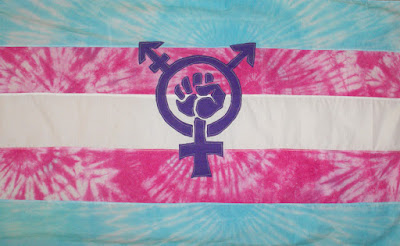 Trans woman mocked for angry outburst in store after being misgendered speaks out - The transgender woman who was made fun of because of a video of her angry outburst in a store has something to say. Just like I said before. Sometimes you get tired of people @!%$ with you.

Karen Pence’s Anti-LGBTQ School To Receive 100 Copies Of LGBTQ Children’s Book - Keep up the spotlight on this issue.


Don't expect any honest answer from Karen Pence. Homophobic evasion is a family trait with the Pences - Repost from last night.

LGBTQ-inclusive bullying laws associated with fewer teen suicide attempts, study says- This is common knowledge but the opposition will attempt to bogart the argument and cover up this fact.

Barr hints at continuing anti-LGBT policies at Trump Justice Department - The way Trump is screwing up, there might not be a justice department soon.

Posted by BlackTsunami at 10:11 AM No comments: