Anyone who reads this blog know that I don't particularly care for anti-gay activist Peter LaBarbera. I consider him to be a homophobic hypocrite who, while using the Bible to explain his hatred of the lgbt community, stoops to the lowest levels to disrespect us.

And to top it all off, he is constantly complaining how we are "intolerant" of him and pick on him because of his supposed Christian opposition to homosexuality.

No, Peter, we get mad when you do stuff like this: 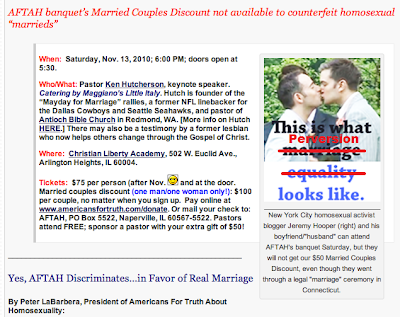 The persons in this picture is Goodasyou.org's Jeremy Hooper and his partner celebrating their wedding. But Peter took it and vandalized it to publicize his group's ridiculous upcoming banquet.

Was it really necessary for him to do this?

His actions are the equivalent of spraypainting the word "faggot" over a poster advertising an lgbt oriented event.  To me, it is the same thing because a message is being sent to lgbts : "How dare you think that you are normal and are deserving of happiness. How dare you don't keep things to yourself and slink back into your closets. How dare you don't define yourself by my standards. Don't you know my heterosexuality makes me better than you."

Three years ago, he exploited a webpage tribute to a deceased gay man, Russell Goff, to again attack the lgbt community.

But believe it or not, as I have said before, Peter is our biggest asset in this so-called culture war. Unlike many of his comrades, he doesn't hide behind the "love the sinner but hate the sin" lie of homophobia.

He trots his hate and absolute disregard of us out in public for the world to see and note the hypocrisy of his position.

Peter doesn't see us as people capable of love and values and any type of basic human decency. He sees us as things totally undeserving of simple respect.

Of course other people  would venture to say that he sees us as a mirror. I'm not one of those people, but if this is the case, it's not our fault that he doesn't like what he sees.

That's between him and God.

'Day of Dialogue': Focus' latest attempt to have it both ways - Focus on the Family is taking over the failed anti-gay "Day of Truth" program, calling it "Day of Dialogue." This means they dialogue, we shut up.

Albion College president talks about gay flag burning - No one got punished for this by the way.

University Ousts Professor After She Announces Same-Sex Marriage - I think this sucks but if it's a private school receiving no tax dollars, what can you do?

More leverage for getting rid of DADT:

A Pentagon study group has concluded that the military can lift the ban on gays serving openly in uniform with only minimal and isolated incidents of risk to the current war efforts, according to two people familiar with a draft of the report, which is due to President Obama on Dec. 1.

More than 70 percent of respondents to a survey sent to active-duty and reserve troops over the summer said the effect of repealing the "don't ask, don't tell" policy would be positive, mixed or nonexistent, said two sources familiar with the document. The survey results led the report's authors to conclude that objections to openly gay colleagues would drop once troops were able to live and serve alongside them.

One source, who has read the report in full, summarized its findings in a series of conversations this week. The source declined to state his position on whether to lift the ban, insisting it did not matter. He said he felt compelled to share the information out of concern that groups opposed to ending the ban would mischaracterize the findings. The long, detailed and nuanced report will almost certainly be used by opponents and supporters of repeal legislation to bolster their positions in what is likely to be a heated and partisan congressional debate.

President Obama has vowed to end the ban. Senior Pentagon officials requested the survey to address areas in which a repeal might cause conflicts that could hinder the military's ability to fight.

And notice I said "get rid of." I didn't say a word about a Senatorial repeal. This may not be in the cards in the lame duck session so let me make a wild prediction. Wouldn't it be interesting if Obama ended DADT via executive order after building up leverage against the policy via this survey and the words of his Pentagon advisers. Just wondering.

Now let my shellacking begin by those lgbts who think that Obama is the second coming of the Anti-Christ.

Posted by BlackTsunami at 6:39 AM No comments: