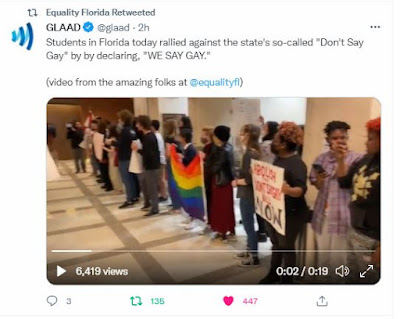 The dual fights in Florida over the 'Don't Say Gay' bill and in Texas over Gov. Greg Abbott's attempt to take trans children away from their affirming parents are past the point of heating up. We're talking Dante Inferno's territory here.

In over 20 Florida schools, students staged walkouts in protest of the 'Don't Say Gay' bill and their presence was felt.

RIGHT NOW | Students at Gibbs High School in St. Petersburg are walking out of class in protest of the controversial so-called #DontSayGay bill moving through the legislature, which limits instruction on sexual orientation, gender identity in schools. @10TampaBay #DSGWalkout pic.twitter.com/RovcSSEh2n

Thousands of students across the state are refusing to watch their classmates (or themselves!) be erased by the legislature. They're demanding an end to #DontSayGay .

Students in Florida today rallied against the state's so-called "Don't Say Gay" by by declaring, "WE SAY GAY."

According to The Daytona Beach News Journal:

And this situation is far from over.
Read more »
Posted by BlackTsunami at 3:53 PM 1 comment:

Twitter suspends Missouri Senate candidate for hateful conduct after transphobic tweet​ - By the time you read this, she will probably be off suspension.
And who is Vicky Hartlzer? A vicious enemy of LGBTQ people. Because of 'Jesus' of course: Congresswoman with extensive record of homophobia now helping 'ex-gay' group lobby on Capitol Hill
In transgender people, GOP candidates find latest 'wedge issue' - And now, she and others are designating trans Americans as collateral damage on their hopeful road to higher office.
Biden: ‘Onslaught’ of state laws targeting transgender Americans ‘simply wrong’ - At his Tuesday State of the Union address, President Biden called out the targeting and attacks on transgender Americans.
Social media posts about LGBTQ politics might actually be making you dumber - Good thing I'm not a social media influencer. You gotta have a significant number of followers for that. LOL
Posted by BlackTsunami at 8:25 AM No comments: