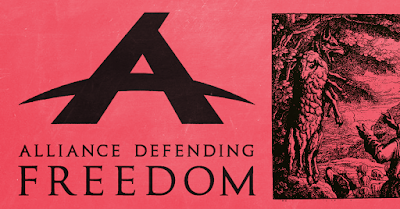 The Supreme Court is set to rule on a case (Masterpiece Cakeshop v. Colorado Civil Rights Commission) which should decide on whether businesses can exploit religious beliefs as an excuse to discriminate against certain customers, particularly LGBTQ customers. I don't know how they are going to rule, but regardless whether it's a defeat or victory for us, people are going to want to know all about the  anti-LGBTQ hate group which pushed the case, the Alliance Defending Freedom.


I've posted this video before, but I have no problems with posting it again. It was created in 2016 and I don't think it covered the full attack on the LGBTQ community masterminded by the ADF. It certainly didn't cover how the group has undertaken many more attacks since 2016.

In America, ADF crafted those awful "bathroom bills" which targets transgender high school and elementary school students. It has worked to pass "religious freedom" laws which discriminate against gays in states like Mississippi. It advocated denying our transgender soldiers their necessary medical care. In addition, ADF is also behind the laws passed in Kansas and Oklahoma which undermines gay adoption in the grounds of "religious liberty."

No more hiding in the shadows for this group And no more lies about them simply trying to protect religious views. No matter how the SCOTUS case is decided, the behind-the-scenes status of ADF will be changed forever.
Posted by BlackTsunami at 5:09 PM No comments: