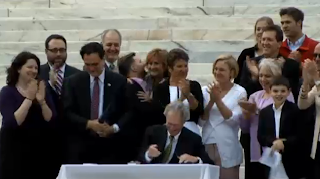 Not a very good picture but still, a historic one taken from twitter (Chris Geidner of Buzzfeed) as Rhode Island Governor Lincoln Chafee signs the bill which makes the state the 10th in the nation to offer marriage equality.

Go here for the story of today's final vote.

Posted by BlackTsunami at 4:02 PM 3 comments:

'When the camera shuts off, the homophobic venom comes on' and other Thursday midday news briefs

What Opponents Of LGBT Equality Sound Like Off The Record: ‘You Are Twice The Son Of Hell’ - So many of us have said that religious right spokespeople are two-faced in what they really say about gays when the cameras aren't on and the pencils aren't writing. Yet more proof of that.

Don't Use Jason Collins As an Excuse to Blame Homophobia on Black People - An article so damn good that I wanted to smoke a cigarette after I  finished reading it.

Why I Am Signing Marriage Equality Into Law - Rhode Island Governor Lincoln Chaffee on why he will sign the bill which will make his state the 10th to have marriage equality.

Is the Military Preparing to Court Martial Christians? - Not necessarily an lgbt-article per se, but you know how the religious right will try to tie this into gays and lesbians being allowed to serve openly. Also, it gives you another opportunity to explore the distortions of Todd Starnes.
Posted by BlackTsunami at 8:58 AM 1 comment:

I apologize for those who are offended regarding this post. But I feel that with regards of Jason Collins' coming out, there seems to be a loss of perspective. From the blog Women's Post comes the tweets of folks not happy with Collins' decision to come out:

Milky Cabrèra @Big_Sal17 - Listening to Jason Collins describe his gayness as "beautiful" makes me wanna puke. And kill him.

★Jacob✝Quinton★ @iAmTheJay_cup v-vI'm so sick of hearin all this crap about how Jason Collins is a hero for admitting he's gay. He's just another faggot if you ask me.

Mega Man @Mega_Man_904 - Ayo real talk.... No one should get recognition for being an abomination.... Jason Collins is going to hell right... http://fb.me/257kKEPFV

The sad thing is that when some read this, they yawn and say "it's to be expected."  And sometimes these are the same folks whining about how gays are "intolerant" when we object to our lives being verbally reduced to "lifestyles."

It is attitudes like these that make his coming out all the more important.

Hopefully someday soon a gay athlete, actor, politician, or person won’t require the fanfare, but until then every single gay person needs the reassurance of your love and support. Their life could depend on it.

Posted by BlackTsunami at 5:03 AM 2 comments: