Let's play a game. How many of the following movies can you name. Feel free to list them in the comment section. A special no-prize goes to those who can name which ones were Oscar nominees/winners:

Porter: Disney Channel Unsafe for Kids Because of Lesbian Moms - Cause apparently Disney showing same-sex parenting is the next phase in our plan to take over America, make Judy Garland's birthday a national holiday, or whatever . . .

Matt Barber: Parents of trans kids should be tried for child abuse - When people ask why do I give attention to the madness of the religious right, I tell them because it makes my job easier. Letting them hang themselves keeps me from getting rope burn.


National Organization For Marriage Defends Ex-Gay Therapy As A Religious Liberty - A key part of this story? After backing "ex-gay" therapy earlier this week, Maggie Gallagher is doing a moonwalk worthy of the late Michael Jackson.

NOM Embraces Group Being Sued For Cruel, Degrading Forms Of "Ex-Gay" Therapy - And THIS is the ex-gay therapy NOM is supporting.

Eugene Delgaudio Finally Disciplined By Loudoun County Board of Supervisors - Using taxpayer money for private anti-gay activities? This one bears looking at.


Posted by BlackTsunami at 8:57 AM No comments:

The National Organization for Marriage is pushing chart by another group, the Heritage Foundation, which supposedly shows the dangers of marriage equality or as they put it "redefining marriage."

But there is one HUGE problem with the chart. It has nothing to do with marriage equality, but the dangers of fathers not being present in their children's lives: 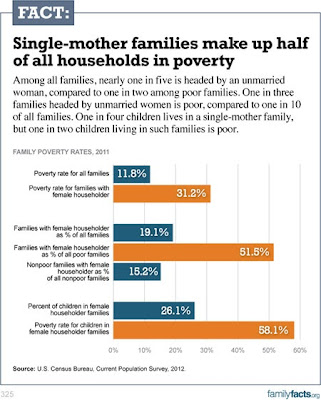 In an attempt to connect the chart with marriage equality, Heritage Foundation member Ryan T. Anderson says the following:

“[R]edefining marriage further distances marriage from the needs of children and denies the importance of mothers and fathers. Redefining marriage rejects as a matter of policy the ideal that children need a mother and a father,” explains Heritage’s Ryan T. Anderson. “Redefining marriage diminishes the social pressures for husbands to remain with their wives and children, and for men and women to marry before having children,” he continues.


In other words, according to the Heritage Foundation, marriage equality (notice how they attempt to change the term to "redefining marriage") leads to more single-mother families mired in poverty.

Bear in mind that the Heritage Foundation offers no proof that marriage equality leads to single-mother families.

And that amazingly brazen leap of logic is why NOM, the Heritage Foundation, and those who support their endeavors against marriage equality are losing the fight.
Posted by BlackTsunami at 4:43 AM 7 comments: