Former Christian Coalition head and conservative activist Ralph Reed attempted to make the case against marriage equality to the Wall Street Journal. It was such a bad performance in his case. Feel free to pick him apart:

Republican National Committee Plan: Oppose LGBT Rights More Quietly - Now you KNOW we aren't going to let you get away with that.

At CPAC, The Marriage Fight Is Over - At a recent meeting of Republican activists and bigwigs - actual and wannabe - NOM and its allies got extremely embarrassed while gay Republicans were received with open arms.

Like so many brave visionaries before him, Bryan Fischer pushes GOP to stand for discrimination - Meanwhile, some folks are spooked that Republicans could embrace marriage equality.
Posted by BlackTsunami at 9:28 AM No comments:

I am so sick of NOM's talking point that those who oppose marriage equality are unfairly branded as bigots.

Let me rephrase that and say it the way NOM and its supporters do:

"It is unfair that those who support the traditional definition of marriage being between a man and a woman are called 'bigots.'"

That phraseology is no different than when the Klan sought to retool its image by saying  "we aren't anti-black. We are just pro-white."

Make no mistake about it, there is a certain animus directed at the lgbt community by many of those who claim to be fighting for "traditional marriage" and this animus is easily proven by those folks themselves.

Thanks to NOManiacs, a site which goes the extra mile by monitoring the stuff which NOM supporters say, the following gives a perfect view of the people who support NOM and the organization are hoping to come to its upcoming march.

NOManiacs assembled a bunch of comments from NOM's facebook page and created a flyer spotlighting these comments.  This flyer is highly NSFW and will no doubt get folks angry. Do not contact anyone, except your friends and allies in order to show them the truth about NOM supporters: 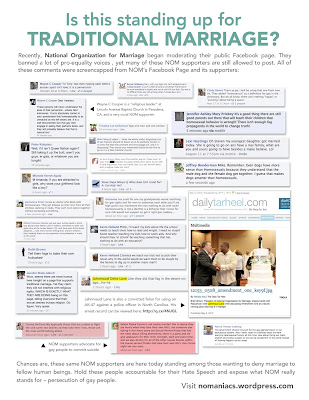 To see this flyer in a more readable form, click here.

The irony, according to NOManiacs is that many voices speaking for marriage equality have been barred from posting on NOM's facebook site, but these voices still remain.
Posted by BlackTsunami at 4:46 AM 2 comments: