Recently, an article in the Huffington Post said that President Obama has quietly been making progress pushing for the rights of the transgender community. Now add this to the news that he will soon be pushing an executive order keeping companies who do business with the federal government from discriminating against lgbts.

Separately, the two items enough to get the anti-gay groups upset. Combine the two bits of news together, and you will receive evil nonsense like this from the Liberty Counsel, home of Congressional misleader Mat Staver and the increasingly unhinged Matt Barber:

A mother calls Liberty Counsel after her six-year-old little girl is assaulted by a gender-confused, adult male exposing himself in the swim team locker room. Another child cries that she doesn’t want to go back to school because she doesn’t like sharing the bathroom with a gender-confused boy. A teacher calls after her freshmen girls’ soccer team complains of a boy in the locker room.

These are the faces of ENDA-like legislation that is sweeping the country.  Disguised under the term “employment nondiscrimination,” ENDA singles out and targets childhood innocence. No one wants discrimination, least of all against children.

Now, President Obama is reportedly going to sign an executive order to add ENDA protection to employees of federal contractors.

Liberty Counsel is encouraging its members to speak up and debunk the ENDA myth. Tell your family and neighbors that ENDA hurts children. Encourage members of Congress to speak up on this issue. Thank House Speaker John Boehner (R-Ohio) for standing steadfast against the assault on childhood.

Exemptions for religious people are not broad enough. They do not protect children from gender-confused adults.


I seriously question the truthiness of these two anecdotes. What's happening is always what happens when any thoughts of ENDA rolls around - religious right groups and spokespeople begin spinning lies about children being exposed to "burly men with five o'clock shadow in short skirts," or even worse: 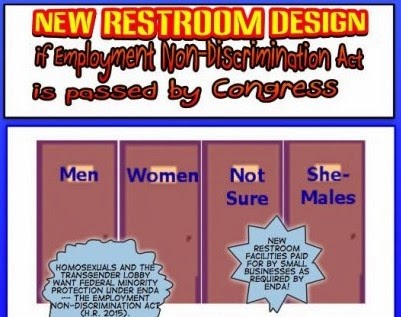 Like always, these so-called Christians, marketing propaganda, spin needless fear of ENDA. It's an old tactic but we shouldn't be surprised.

FRC is an extremely deceitful org: Example #1,234,234,921 - At this point, catching the Family Research spinning distortions against the lgbt community is as easy as shooting fish in a barrel. However, as long as the group has credibility in D.C. as a "traditional values" group, let's continue to hit those fish.
FRC Claims Majority Oppose LGBT Workplace Protections, Cites A Poll That Says The Opposite - More about that FRC deception.


Republican Senator Says Republicans Must Abandon Same-Sex Marriage Issue To Win Elections - Good luck with that one. How long will it be before we get a harangue from those talking about "standing up for principles and values at the cost of elections" even with those "principles and values" have no grounding in fairness or integrity.

Obama Administration Sanctions Uganda for Anti-Gay Legislation - Well it's about time. No money for nations who will persecute my people.

AFA Wants Libraries To Dump 'Sexually Perverse' Gay Children's Book - No surprise that the book is not "sexually perverse." I wonder how Brown feels about the story about one little girl living in a forest with seven "questionable" little men or a girl who haven't had a haircut since she was born getting pregnant by a prince who visits her tower, or two children abandoned in the forest by their parents and nearly become cannibalized by a witch. And I won't EVEN MENTION what the prince did in the original version of 'Sleeping Beauty;' a version which is in some libraries.
Posted by BlackTsunami at 9:04 AM 1 comment:

Sorry guys, you are anti-gay bigots. Own up to your righfully called name

I am not sure what type of publication the Daily Signal is, but one thing is clear about it.

It's definitely not an accurate one. The National Organization for Marriage is using it to deflect from the piss poor march it held last week:

There's little doubt that the mainstream media is complicit in the effort to redefine marriage, one only has to sit through prime time television or subscribe to an internet news service to have same-sex marriage messages bombard your senses. But when several thousand American's descend upon our nation's capital to defend and march for true marriage and every child's right to experience the love and nurture of both a mother and a father, the media is deaf and dumb. Daily Signal reporter Kelsey Harkness, writes, "Yet, as thousands gathered in the sun today on Capitol Hill to rally behind the historic and tradition views of marriage — as the union of one man and one woman – relatively few reporters were in sight. The advance of same-sex marriage, in contrast, has been much in the media spotlight." She then asked three prominent speakers for their opinion of this issue.


Obviously, Harkness is either lying or she doesn't know how to count. At the very best, march had 2,000 participants and at the very least, 1,500. It's hardly the throng she makes it sound.

But her interviews with the three speakers, particularly Mike Huckabee, because they represent a talking point which the lgbt community must recognize and overcome:

Huckabee obviously spoke at a different march. In truth, he is applying a diversionary tactic, i.e. whining so loudly about being falsely labeled as a bigot, folks are distracted as to why such designations are appropriate.  And he is not the only one. NOM has built its entire movement on this distraction. Also, when the Southern Poverty Law Center declared the Family Research Council and other anti-gay organizations to be hate groups, they whined extensively about folks not wanting to debate them on lgbt issues, making sure that the volume of their whine drowned out those who did want to debate their tactics with regards to lgbt issues.

Unfortunately to Huckabee, we all aren't as deliberately oblivious as he wants us to be. I would love for him to defend the following signs from NOM supporters during the march as examples of tradition: 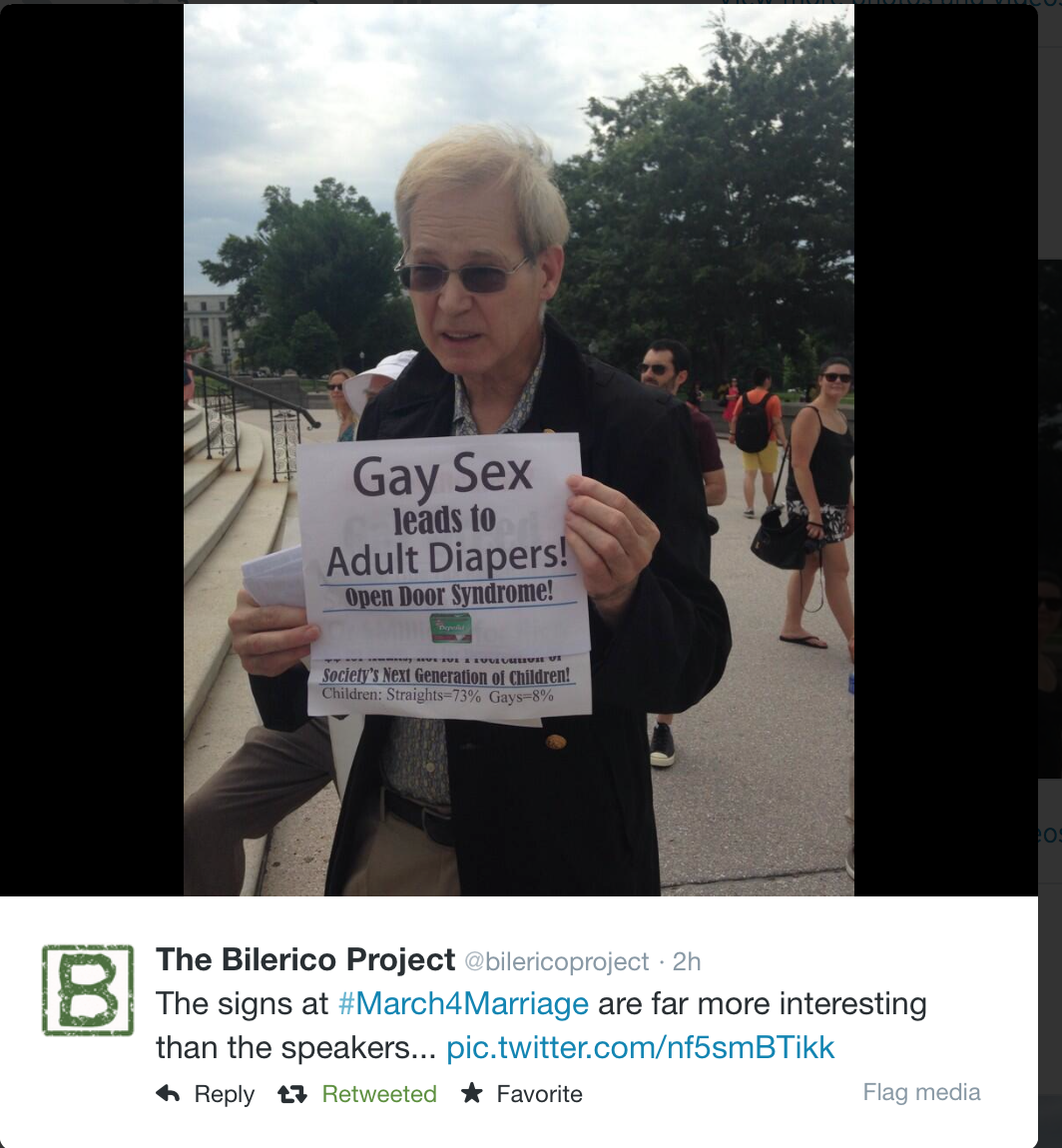 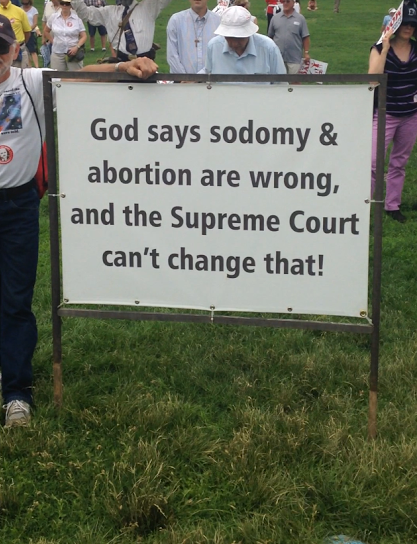 No matter how Huckabee attempts to spin it, very few people are stupid enough to fall for his whine. Maybe it's just my traditional values, but I believe that if you attend a march with signs talking about how "gay sex leads to adult diapers," how "gay marriage is Satanic," and other signs about "sodomy," that makes you either a bigot, a very, very money conscious vendor, or maybe a very persistent Jehovah's witness. And somehow I doubt Huckabee and company fall under those last two categories.

Thank you Right Wing Watch and Bilerico Project for the pictures.
Posted by BlackTsunami at 4:56 AM No comments: