I told some people that I wouldn't cover this because it's so vulgar. But this needs to be put on as many pages and spread to as many folks as possible.

Congressional Rep. Michelle Bachman invited the "tea partiers" to descend on the Capitol today in an effort to scare (her words, not mine) lawmakers against voting for Obama's health care reform.

True to form, they showed up, though not in as many numbers as in the past.

But what they didn't have in numbers, they made up in crazy. Sorry but I can't be nice to people who have no problem with holding up the following images: 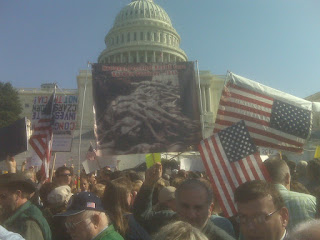 A closer view of the picture is here: 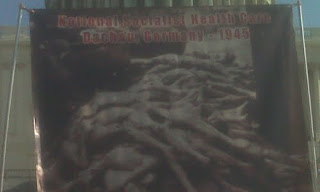 Read more »
Posted by BlackTsunami at 12:08 PM 6 comments: Links to this post

Say what you will about why we lost in Maine, you have to admit that lgbts have learned the lesson from the aftermath of Proposition 8.

After that vote last year, some lgbts allowed their anger to rule their minds, acted the fool, and created a few events that folks like Mike Huckabee, Peter LaBarbera, Matt Barber, and the rest replayed continuously as proof of "intolerant angry lgbts."

Well that didn't happen this time when NOM head Maggie Gallagher showed up at a DC rally protesting the marriage equality loss in Maine:

It appeared to bother some attendees of tonight's rally that Gallagher would appear at a pro-gay marriage event, yet the estimated crowd of 120 mostly left her alone as she observed the hour-long protest.

Gallagher said she had just been at a nearby building and it was by "great coincidence" that she was passing by. She stated that she was not attending the event as part of a professional capacity and did not wish to go on camera for an interview.

Just who is she trying to fool? My guess is that Gallagher went to that event looking to exploit anger as more ammunition for her tired narrative of "gays label people who want to protect the sanctity of marriage as bigots but it is the gays who are bigots."

No doubt she came to that event looking for new stuff to use in television interviews.

I'm willing to bet a paycheck that if someone tossed a paper cup in the trash which may have been next to where she was sitting, within minutes Gallagher would have been twittering about how she "had objects thrown at her."

The folks in D.C. should be commended for not prey to Gallagher's game.

They clearly show how it should be done - harness the anger against the wrongs done to us and not the folks behind it.

Posted by BlackTsunami at 9:08 AM 6 comments: Links to this post

Carrie Prejean uses up the last of her 15 minutes

Every now and then I must succumb to temptation and report on "popular" issues.

In this case, I will console myself with the fact that this is a very important issue outlining the hypocrisy of the religious right:

Carrie Prejean, former Miss California who was fired under scandal, has dropped her lawsuit against pageant officials. Both parties have withdrawn their lawsuits and in an official settlement statement reads, “ Carrie Prejean, Keith Lewis, and K2 productions have dropped their claim against each other and wish each other the best in their future endeavors.” Carrie gets no money other than her attorney fees. The reason, as reported by TMZ, Carrie settled the suit is that the pageant officials were going to release a tape of the lovely Miss California masturbating. Yes it looks like the good Miss Prejean had made a little home movie that got into the hands of pageant officials and she did not want it to go public. On a lighter note, Carrie Prejean will get to keep the money she was given for breast implants and her book will hit the stores soon.

I wonder will the National Organization for Marriage call this a case of persecution against Christians?

Really though, while people are most likely tired of the Carrie Prejean saga, it's important to remember just how quickly the religious right embraced Prejean, making it seem that she was the victim of lgbt persecution rather than the words of just one, albeit highly annoying, lgbt blogger and "personality."

They even went as far as to call her a latter-day Queen Esther.

One wonders what the spin will be on this one?

Posted by BlackTsunami at 6:46 AM 7 comments: Links to this post