The argument about religious liberty vs. LGBTQ equality took another turn on Thursday.

The Washington State Supreme Court has just handed down a unanimous ruling against Barronelle Stutzman, the owner of Arlene's flowers, who refused to make arrangements for a longtime customer because he was marrying a man.

The ruling upholds a lower court's decision that found Stutzman's case was not decided with animus toward her religious beliefs – an argument that did win in the case Colorado Christian baker Jack Phillips at the U.S. Supreme Court. There is no suggestion the two cases are similar.


According to a press release issued Thursday from the Office of Washington State Attorney General Bob Ferguson - In 2013, Stutzman refused to sell flowers to a customer for his upcoming wedding to another man. She was sent a letter on March 28 that same year asking that she comply with Washington state law which prohibits discrimination by business of sexual orientation.  She refused. A lawsuit was filed by the office of the attorney general in April of that year. That lawsuit was later consolidated with the lawsuit filed by the couple Stutzman refused to sell flowers to.  In February 2015, Benton County Superior Court Judge Alex Ekstrom ruled against her. Stutzman appealed to the Washington Supreme Court and lost that case in 2017. In 2018, due to the Masterpiece ruling (in which the court ruled in favor of the baker because it felt that there was hostility shown against his religious beliefs), the Supreme Court vacated this ruling and sent it back to the the Washington Supreme Court for a second look.

Throughout the entire situation, Stutzman's lawyers at the Alliance Defending Freedom, a right-wing group which specializes in cases which could undermine LGBTQ equality,  and other religious right groups made her their poster child in their fight against LGBTQ equality. She has been consistently portrayed as an innocent Christian grandmother who stood to lose her business, livelihood, and savings because a supposed aggressive gay agenda.

The following tweet was sent out by then Alliance Defending Freedom spokesperson Kerri Kupec (who is now the spokesperson of the United States Justice Department) in 2016: 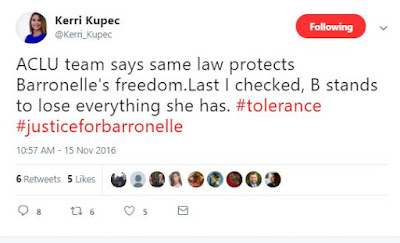 The Family Research Council said the following about Ms. Stutzman in 2018:

The Washington grandmother, who is being personally and professionally sued by the state, could lose everything in a suit brought by two men who accused her of "discrimination" when she turned down their custom wedding order.


In an article posted by right-wing One News Now on Thursday, Stutzman continued to push this angle:

"While I know this isn't the last word on the case, it pains me to see my own state continue to come after my flower shop, my home, and every penny I own – especially after the U.S. Supreme Court specifically instructed the state court to look at my case more seriously," Stutzman, 74, said in a media call today. "I risk losing everything just because I chose not to participate in a same-sex wedding of a long-time friend and customer."


But Stutzman's claims about being in danger of losing her flower shop, home, and every penny she owns simply isn't true. The following tweet from Washington State Attorney Ferguson, who defended the state's case against Stutzman, called out false statements made by her and her attorneys: 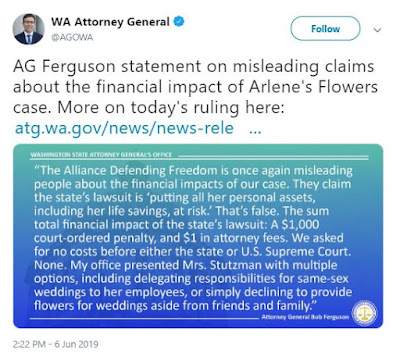 Some may say that the exaggeration pushed by Ms. Stutzman and her attorneys is a minor detail in the huge argument about religious liberty vs. LGBTQ equality and it's not worth bothering about. I disagree.  This, in fact, is a crucial detail because it invoked the connotation that the LGBTQ community was hellbent on destroying a grandmother's business and leaving her bankrupt and destitute simply because of her Christian beliefs. And this is the crux of the "religious liberty" argument pushed by  Stutzman, ADF, and those on the right - i.e. that the LGBTQ community is so strident in forcing people to accept us that we will destroy anyone who gets in our path to that acceptance. And if by doing this, we wreck Christianity, then that's double success for us.

The argument deliberately and falsely frames the LGBTQ community as wanton aggressors instead of who we actually are - people who simply want fairness for ourselves, our families, and our children.

Stutzman and her attorneys say that supposedly participating in a gay wedding - via allowing her flowers to be used - would have violated her personal and deeply held religious beliefs. It's a shame that they clearly didn't feel the same way about lying.
Posted by BlackTsunami at 4:32 PM 1 comment: 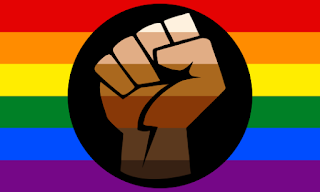 Bill in Congress Would Ban Gay, Trans 'Panic' Defenses - Would be nice if it could pass.