I missed this two-week old but very important story:

Parents in the Alameda Unified School District were refused the right to excuse their kids from classes that would teach all kids in the district's elementary schools about gay, lesbian, bisexual and transgender alternative families.

The parents say they are concerned about "indoctrination" in the schools, but administrators say the course is needed to protect against sexual discrimination — and that the lessons are protected by laws in California and 10 other states.

Those states, which stretch from Washington to Maine, will now be eyeing the court results in California in a case that warring sides say pits parents' rights against a schools' responsibilities

Shades of the David Parker incident, but without the histronics of a parent orchestrating a phony moral panic and engaging in lies about his child "being taught about gay sex."

But one wonders if that implication of children "being taught how to be gay" is behind all of these concerns.

As this story continues to be known, this little detail will probably be obscured:

The contested California curriculum includes an annual 45-minute LGBT lesson taught to kids from kindergarten through the fifth grade. The kindergartners will focus on the harms of teasing, while the fifth graders will study sexual orientation stereotypes.

The move toward the new classes began two years ago, when teachers noticed that even kindergarten students were using derogatory words about sexuality, such as "fag."

One of the parents opposinig the curriculum does have a point regarding what children should be taught:

"My child has been the product of bullying because she's black," said Dion Evans, who noted that students have "never viewed a single video in the classroom" that deals with racism.

I don't know if Evans's claim is totally accurate (about racism not being dealt with in his child's class), but there does need to be something in place which teaches students to show respect for all people and all positive family environments.

And here is the problem. If such a mechanism was in place, just how long would it be before some phony pro-family group, some self-appointed guardian of the definition of "traditional values" would lobby school districts to exclude lgbt families?

But to put things in the here-and-now, just which one of these "morality groups" are behind the parental lawsuit?

The problem here does not lie with the school, but with some of the parents. They seem to be embracing an inaccurate notion that lgbts aren't raising children; that we aren't parents with concerns about how our children and family situations aren't being acknowledged in the classrooms. And these parents are also embracing the more deadly notion that lgbt children do not exist.

This is not a situation involving parents' rights because the schools aren't infringing on them. And yes these classes should be mandatory. What's wrong with teaching kindergartners the harm of teasing their classmates? What's wrong with breaking down sexual orienation stereotypes? What's wrong with acknowledging the existence of so-called alternative (but still highly beneficial) families?

It's a matter of simple fairness.

Posted by BlackTsunami at 9:01 PM 2 comments: Links to this post

Yesterday, the teabaggers had their big March on Washington, which officially caused those who participated in legitimate marches on Washington to either roll their eyes or roll in their graves.

And now comes the echo chamber of lies that will be propagated no doubt by Fox News, the phony religious folks at One News Now, and other right wing battle stations.

Such as the claim pushed by Matt Kibbe, president of FreedomWorks, the group that organized the event. He said that ABC News reported that 1 million to 1.5 million people were in attendance.

However, ABC News has come out swinging against this claim:

Conservative activists, who organized a march on the U.S. Capitol today in protest of the Obama administration's health care agenda and government spending, erroneously attributed reports on the size of the crowds to ABC News.

Matt Kibbe, president of FreedomWorks, the group that organized the event, said on stage at the rally that ABC News was reporting that 1 million to 1.5 million people were in attendance.

At no time did ABC News, or its affiliates, report a number anywhere near as large. ABCNews.com reported an approximate figure of 60,000 to 70,000 protesters, attributed to the Washington, D.C., fire department. In its reports, ABC News Radio described the crowd as "tens of thousands."

Brendan Steinhauser, spokesman for FreedomWorks, said he did not know why Kibbe cited ABC News as a source.

I know why Kibbe cited ABC News as a source for his lie. Because of this:

As a result of Kibbe's erroneous attribution, several bloggers and commenters repeated the misinformation.

Now that these bloggers and commenters know the truth (and I suspect a number of them knew that Kibbe's claim was specious at best) how many of them will:

A. do the right thing and correct what they said about attendance numbers,

B. accuse ABC News of being in on "THE CONSPIRACY to make the country socialist,"

I wonder how Kibbe would feel if people followed him around screaming "You Lie!" or created t-shirts and bumper sticker with the phrase emblazoned across his picture?

Whatever the case may be, it's a sad commentary for any movement who feels that it has to fight distortions by engaging in a few of its own.

Posted by BlackTsunami at 1:02 PM 4 comments: Links to this post

Repost - What some people really think of gay marriage

This piece ran on June 4 of this year. It may seem funny but notice the subtle similarities between the Chick Publications (the creator of the awful comic seen below) and the implications raised by Maggie Gallagher and the National Organization for Marriage that marriage equality will be "forced on children."

And notice how neither entity wants to acknowledge the existence of lgbt children and same-sex families that include children.

Maybe it's just me but marriage equality coming to New Hampshire seems to have left some members of the religious right a bit dazed.

One News Now has yet to report on it and my usually reliable anti-gay Peter LaBarbera hasn't said a word yet.

Even Focus on the Family have been strangely silent.

But not everyone is silent.

It is an old tract (it was created in 2004) and while it does not address marriage equality in New Hampshire per se, it's safe to say that the creator doesn't exactly care for gay marriage at all.

The following are some snippets from the tract: 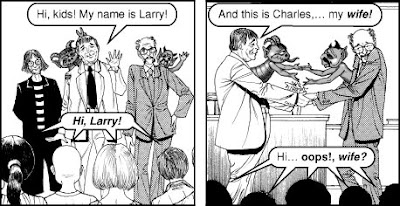 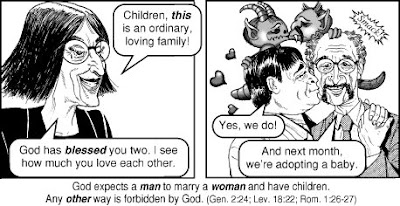 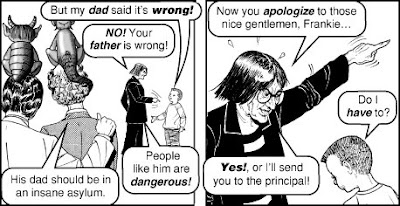 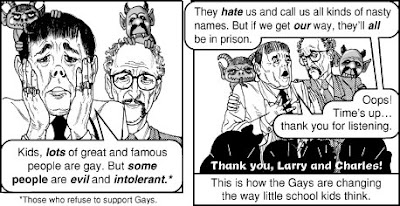 Judge for yourself but I tend to think that minus the little imps, this is exactly the argument the religious right uses against marriage equality.

It's not exactly a logical argument when drawn out, is it?