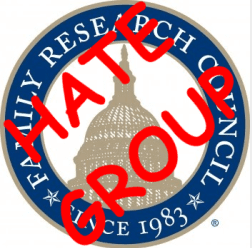 Old habits do indeed die hard. Particularly if one of those habits happen to be distorting scientific work to lie about the LGBTQ community. It's been quite a while since the Family Research Council has done this, so my guess is the group is attempting to make up for lost time.

FRC is angry at Texas Speaker of the House Joe Straus for speaking the truth about the anti-transgender bill some in that state are eager to pass.  Straus recently said he was disgusted by the debate and implied that the bill could lead to the suicides of transgender men, women, and children.

Naturally, FRC posted a push back filled with distortions:

Lt. Governor Patrick, who’s led the charge for privacy, hopes Straus’s comments were misreported. “Obviously, no one wants to see harm to anyone as a result of any legislation that is passed,” his office responded. Of course, as FRC’s Peter Sprigg points out, the most harmful position may be the House speaker’s. Suggesting that protecting women and children would lead to suicide is a ridiculously false and disingenuous statement. Even the Left cites studies by the American Foundation for Suicide Prevention’s Ann Haas, who says, “Years and years of research has taught us that the overwhelming number of people who die by suicide had a diagnosable mental disorder at the time of their death.” In other words, people do not commit suicide because of the passage of legislation, or even because of “bullying,” but because of mental illness (which gender dysphoria, according to the APA, is!). There’s absolutely no evidence that which bathroom someone uses will cause them to commit suicide.

In an older article of the journal Pediatrics, the authors wrote: “….suicide attempts were not explained by experiences with discrimination, violence, loss of friendship, or current personal attitudes towards homosexuality.” A 2005 analysis of this article, by conservative scholar Neil Whitehead, Ph.D., is still available online. “So these last two points,” Peter points out, “that public hysteria about LGBT suicides may actually contribute to them, and that early self-labeling also increases them -- suggest that Straus’s own comments (reflecting fear of transgender suicides, and implicitly supporting self-labeling even by schoolchildren) might do more to cause suicides than passing the Privacy Act would!

Then, of course, there’s the important 2011 Swedish study, which showed that even AFTER having gender reassignment surgery, people who identify as transgender had a suicide rate 19 times higher than the general population. This undermines any suggestion that simply giving those who identify as transgender everything they ask for will do anything to reduce their suicide rate.

The American College of Pediatricians calls agendas like Straus’s child abuse. This week’s Daily Signal highlights one such pediatrician, who says that this ideology has infiltrated her field and offered a deeply-flawed narrative. Read why here. As for Texas, let’s hope leaders like the House speaker can set aside their own prejudices long enough to do what’s in the best interest of the state -- which research shows is not a gender-free existence!


There is just so many lies pushed here. Allow me to break them down:

Texas Speaker: ‘I don’t want a suicide on my hands’ over bathroom bill - Good for him!

Conservatives celebrate delay of transgender military enlistment - They are giddy about a six month delay of implementation. However, it will still happen.


What happens to America if Justice Kennedy retires - EVERYONE will be screwed. We need to plan about this. Kennedy now is the only thing holding the religious right back from causing complete chaos. And he is not going to be there forever.

The Do’s And Don’ts Of Being An Ally To Parents Of Trans Kids - Pay attention . . .

Posted by BlackTsunami at 9:25 AM No comments:

Christian baker merely a pawn in international game of homophobia

A baker at the center of a discrimination lawsuit headed to the Supreme Court believes he’s got Jesus in his corner. Jack Phillips, the owner of Masterpiece Cakeshop in Lakewood, Colorado, appeared on “The View” with his attorney to discuss his refusing to make a wedding cake for a same-sex couple, Dave Mullins and Charlie Craig, in 2012. “I serve everybody all the time but I don’t make every cake for every event that’s required,” Phillips told the hosts of “The View” late last week. “It’s a difficult thing to be in my position and know that somebody is requesting something that I can’t in good conscience do.”


Sounds reasonable, doesn't it? That's the problem. Phillips's assertions are not reasonable nor are they legitimate. In fact, while he may consider himself as an innocent symbol of anti-Christian oppression, Phillips is nothing more than a pawn in a larger game. However, he is useful in that his visibility obscures the game. While Phillips portrays himself as a simple baker in battle against a so-called army with a sinister agenda (the LGBTQ community), no one is talking about the organization backing him - The Alliance Defending Freedom.

You see, this situation about Phillips and his bakery is not a case of "religious freedom."  In looking a the actions of the ADF, one realizes that it's merely another avenue in a widespread attempt to either hinder or undermine LGBTQ equality. And not just in the United States.

Here is a couple of facts you need to know:

The Alliance Defending Freedom is considered an anti-LGBTQ hate group by the Southern Poverty Law Center. And the reason for this has to do with several other facts uncovered by the group Media Matters, including:

ADF Has Expanded Its Anti-Choice, Anti-LGBTQ Extemism Internationally. While ADF has largely run out of options for promoting the criminalization of homosexuality in America, the group has taken its anti-sodomy agenda overseas. ADF has actively worked to promote and defend anti-sodomy laws that criminalize gay sex in Jamaica, Belize and India. In 2010, the United Nations granted special consultant status to ADF, allowing the group to help shape international human rights policy and treaties. More recently, the group has become involved in the Organization of American States, where ADF’s mission has been battling “abortion and radical sexual agendas.”

ADF Is Behind The National Push For Anti-LGBT “Religious Freedom” Laws. Since 2013, ADF has led the national push for so-called “religious freedom” laws (RFRAs) that seek to enshrine a legal right to discriminate against LGBTQ people. ADF was behind Arizona’s failed 2014 RFRA, Indiana’s controversial 2015 RFRA, and similar bills that were eventually killed in Colorado, Georgia, and Arkansas.

ADF Is Leading The National Campaign For “Bathroom Bills” Targeting Transgender Youth. In 2014, ADF launched a national campaign to eliminate nondiscrimination protections for transgender students and instead enshrine its own legislation that would prevent transgender students from accessing facilities consistent with their gender identity. ADF has influenced discriminatory state and local school district policies across the country with so-called “bathroom bills,” like North Carolina’s infamous HB 2, that borrow language from ADF’s model legislation.

ADF Believes In A “Homosexual Agenda” Dedicated To Destroying Christianity. ADF founder Alan Sears literally wrote the book on the alleged “homosexual agenda” -- his 2003 book The Homosexual Agenda: Exposing the Principal Threat to Religious Freedom Today compared the gay "propaganda" movement to what "Hitler did so masterfully in Nazi Germany, to get the American public on their side." As SPLC noted, ADF “has also promoted the idea of a ‘homosexual agenda’ -- a nefarious scheme to destroy Christianity and, eventually, civilization.”

ADF Claims Non-Discrimination Protections For Transgender Students Pose A "Public Safety Risk... To Woman And To Children." ADF claims that allowing transgender students to access facilities that correspond with their gender identity would "seriously endanger students' privacy and safety," and that laws that prohibit discrimination on the basis of gender identity create a "significantly increased public safety risk primarily to women and to children."


Bottom line - behind this false story of an innocent baker beset by a supposed evil group attempting to make him compromise his religious beliefs is a powerhouse organization pushing the same thing that these so-called cultural battle issues have always been about:

Making life as difficult as hell for the LGBTQ community.