Yesterday I posted about the plans of SC Republican State Senator Lee Bright  to introduce an anti-lgbt bill similar to the one passed recently in North Carolina. For now, it doesn't look like the bill is very popular. Gov. Nikki Haley (a Republican) has already voiced her disapproval of it. And today, Bright's bill was practically eviscerated on the Senate floor by Democrat Sen. Marlon Kimpson.

Kimpson didn't hold a thing back:

Kimpson, a Democrat, took to the floor of the Senate Thursday to complain about gun reform bills not getting a hearing but then directed his frustration at a bill introduced by Sen. Lee Bright, a Spartanburg County Republican.

"Yesterday South Carolina sank to a new low," he told the Senate. "We're going to have the Lee Bright genitalia patrol for bathrooms in South Carolina. That is the most blatant form of intrusion, of discrimination of sexual orientation.  Now we are becoming the laughing stock in the nation because we are joining North Carolina, Tennessee and Mississippi."

. . . Kimpson said Bright's bill has generated a hashtag, #peewithlee  which is making "a mockery of the state."

"A transgender person should use the restroom that corresponds to his or her gender identity," he said. "Under peewithlee's Bright's bill, we're now going to have the genitalia bill now checking birth certificates at the restroom door. I can't imagine a more ridiculous bill."


According to GreenvilleOnline, the bill has a dim chance of passing. Let's cross our fingers.
Posted by BlackTsunami at 2:42 PM 1 comment:

'Family Research Council wants you to boycott Paypal except for when . . .' other Thur. midday news briefs 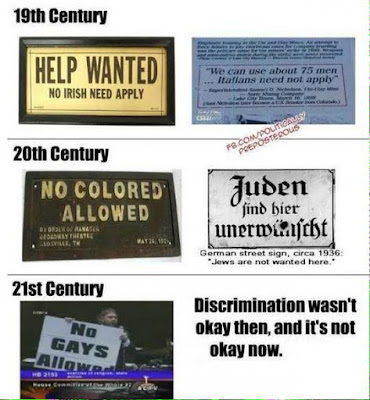 Tennessee Lawmakers Just Passed a Bill That Would Allow Therapists to Refuse to Treat Gay Clients - NOT a good thing for us but mostly not them. I once said that the other side will not say how far should "religious liberty" should go because they want to get away with as much discrimination as they can. This should prove it.


Will South Carolina follow? Not likely with Haley in charge - More on SC's attempt to follow North Carolina's lead in passing an awful anti-lgbt bill. Further prediction that Republican Gov. Nikki Haley may be a stumbling block on the bill because of the negative economic blow back NC has been receiving.

Even More Executives Come Forward To Defend LGBT Rights - As nauseous as this backlash is, it could actually work in the favor of the lgbt community. We are able to create a dialogue on our issues, particularly issues involving our transgender brothers and sisters. Plus, the false mask of piety is slowly slipping off of the face of our opposition, revealing their base nastiness.
Posted by BlackTsunami at 9:15 AM No comments: