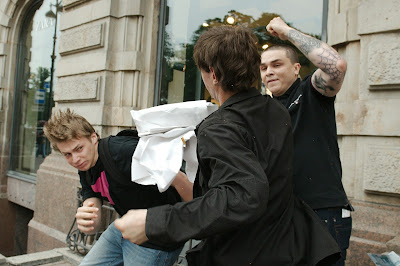 Islamophobic comments and vocal support of Putin's persecution of the Russian gay community is now causing American pastor Franklin Graham much trouble. British pastors and politicians are undertaking an effort to keep him out of England.

Several British pastors and politicians are voicing concerns about a controversial American evangelist’s plans to preach in the U.K. next year.

Franklin Graham, a prominent evangelical pastor who has made blatantly homophobic and Islamophobic statements in the past, is scheduled to headline the Lancashire Festival of Hope in Blackpool in September 2018. Graham’s three-day event — similar to the “crusades” once led by his famous father, Billy Graham — is reportedly taking place with the blessing of more than 300 church leaders and members in England.

But not all residents of the area are enthused about Graham coming to town. Some have urged the U.K.’s home secretary Amber Rudd to ban the preacher from entering the country altogether, the Guardian reports.

Nina Parker, the pastor of a church in Blackpool, told HuffPost in an email that she’s worried that Graham’s visit could embolden those who are prejudiced toward Muslims and queer people to express that hate.


In addition, according to the Huffington Post, Parker is involved with an online petition asking the home secretary to keep Graham away from England. Presently, the petition has over 6,000 signatures.

Paul Maynard, a minister at the Department of Transport and a Blackpool MP, has written to Amber Rudd urging caution over Graham’s visit to the UK.

Gordon Marsden, another Blackpool MP who has called on the home secretary to consider refusing Graham entry, said the evangelist may have broken UK legislation on hate speech.

“I think frankly the evidence is piling up that his visit to the UK … would not be a good thing and not probably in my view a very Christian thing.” Graham’s statements were “incompatible with what Jesus said in the Bible”, he told BBC Radio Lancashire.

Afzal Khan, the Labour MP for Manchester Gorton, said he was concerned about the prospect of Graham sowing division in the UK. “His views are not welcome, and I will make representation to the home secretary if it looks like he is intent on coming,” he told the Guardian.


Both The Guardian and Hufffington Post list past comments by Graham which are the basis for the concern over his visit.

The evangelist, who backed Donald Trump in last year’s US presidential election, has described Islam as “an evil and very wicked religion” and has equated the actions of extremist groups such as Isis with the faith. He claimed that Barack Obama was “born a Muslim” and had allowed the Muslim Brotherhood to infiltrate the US government at the highest levels during his presidency. He also said the Obama administration was pushing “a gay and lesbian agenda”, and he has spoken out against LGBT rights, saying Satan is behind same-sex marriage.

Graham proposed a ban on Muslims entering the U.S. in July 2015, months before Trump did the same. Graham has also suggested that allowing LGBTQ people into churches or Christian homes is allowing the “enemy,” or Satan, to “devour our homes.” Graham praised Russian President Vladimir Putin in 2014 for protecting Russian children from the “damaging effects of any gay and lesbian agenda.”


Photo of anti-gay violence in Russia taken from MotherJones.