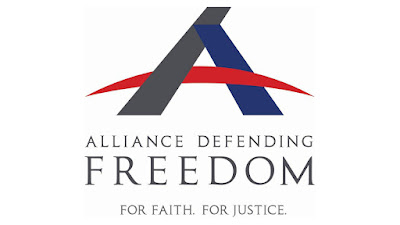 Yesterday, I posted about the Eliminate Hate campaign, a new initiative designed to bring attention to anti-lgbtq hate groups and the propaganda and actions they take against our community. This morning, an article by Reuters focused on the campaign. It also quoted a spokesman from Alliance Defending Freedom, one of the groups the campaign is targeting:

"ADF doesn't have time to respond to organizations who do nothing more than call names, create division and incite violence across the country in order to raise money," spokesman Greg Scott said in a statement.


That was a nice quote, but allow me to make a few changes. Not to the quote itself, mind you. But just putting in some additions which will bring some irony to Scott's words:

ADF doesn't have time to respond to organizations who do nothing more than call names,

“As the homosexual agenda continues to sexualize our culture, other once-forbidden behaviors are exalted as just more alternative lifestyles. The result is that the well-being of millions of children is at risk, along with the right of parents to protect their children from sexual exploitation.” —Alan Sears and Craig Osten, The Homosexual Agenda: Exposing the Principal Threat to Religious Freedom Today, 2003. Alan Sears is the founder of the Alliance Defending Freedom

The international arm of the Alliance Defending Freedom, an anti-LGBTQ organization that has been labeled a “hate group” by the Southern Poverty Law Center, sought to intervene in the case, arguing that states have the right to address transgender rights based on national contexts and tradition. ADF also argued that the court should not consider the Yogyakarta Principles, which relate to sexual orientation and gender identity, when determining if forced sterilization violates transgender people’s human rights. - European Court demands end to forced sterilization of transgender people, April  11, 2017

The ADF, which has argued that removing anti-LGBT sodomy laws from criminal codes will pave the way to same-sex marriage, has worked to keep those laws on the books, but mostly overseas since the U.S. Supreme Court struck down anti-sodomy laws in this country. The group has advised anti-LGBT organizations in countries like Belize that were trying to keep the law that criminalized homosexual sex on the books. That law was declared unconstitutional by the Belize Supreme Court in 2016. In other instances, ADF leadership has defended criminalization, as when Benjamin Bull, director of ADF Global, applauded the Indian Supreme Court’s decision in 2011 that recriminalized homosexual sex, making it punishable by up to 10 years in prison. The court did the right thing, Bull said, choosing to “protect society at large rather than give in to a vocal minority of homosexual advocates.” - Southern Poverty Law Center

In 2014, Alliance Defending Freedom was one of several anti-lgbtq and religious right hate groups to travel to Russia and meet with Yelena Mizulina, the author of the infamous Russian anti-gay bill:

Mizulina is the head of the Duma’s committee for family, women and children and coauthor of Russia’s new ban on speech in favor of gay rights to minors. The World Congress has been one of the most vocal international defenders of that law. The fact that the World Congress and its members are working directly with her to plan an exchange with members of the Russian parliament shows that the summit’s location in Moscow isn’t just an accident of geography. In fact, as we have reported, WCF has built up a structure of activists in Russia to push anti-gay, anti-choice policies throughout Eastern Europe in the year’s leading up to the 2014 summit, and it was “activists working with the World Congress of Families” who invited Brown to speak to the Duma in favor of the adoption ban.

ADF Boasts A $48 Million-Plus Annual Budget And Over 3,000 “Allied Attorneys.” In 2015, ADF had a $48 million-plus annual budget. In addition to its staff of over 30 staff lawyers, the group marshals what it calls a “powerful global network” of over 3,100 ADF-trained “allied attorneys,” many of whom are expected to provide at least 450 hours of pro bono services within three years of attending one of ADF’s training programs. ADF’s elite “Blackstone Fellows” have worked or interned in at least nine state governments. [Media Matters, 1/25/17; Alliance Defending Freedom, accessed 2/15/17; 2/15/17; 2/15/17; Rewire, 5/13/14]


For all of his deflection, Scott  cannot hide the Alliance Defending Freedom's paper trail of  homophobia and bigotry.

18 Anti-Gay Groups and Their Propaganda

Posted by BlackTsunami at 9:12 AM 2 comments: