My last post, which featured on that awful anti-transgender ad in Houston depressed the hell out of me.

The droll comedian in me, however sees a bit of humor in how anti-gay groups and their spokespeople demonize the transgender community. In the nine plus years which I have run this blog, they have gone from claiming that transgender men and women want to corrupt children in the classrooms: 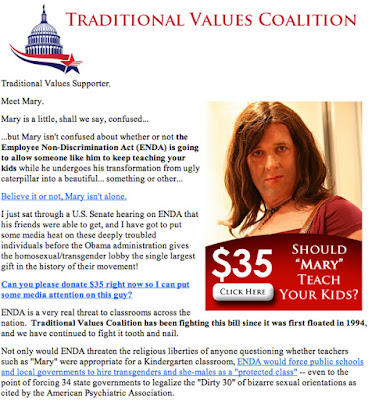 to claiming that transgender women want to invade women's bathrooms and locker rooms: 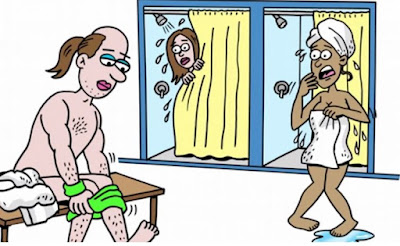 My guess is that they will be soon claiming that transgender women will be wanting to inject pregnant women with some type of formula which will make their infants come out of the womb as transgender.

However, one thing won't change. The anti-gay will continue to smear transgender women as predators as long as they can get away it, just like they attack gay men the same way. There is that fear tactic about a "man victimizing a woman" that they cling to. And it depresses me because I have to remember that no matter how many times I work to refute it, there is still work to do.

Trailing In Polls, Houston Equal Rights Opponents Continue Desperate Anti-LGBT Ad Campaign - Folks who want the pro-lgbt ordinance in Houston to pass would do good to turn up the heat. We've seen this before. When the opposition is behind in the polls, they dial UP the crazy as the above video shows. And when the crazy is dialed up, ANYTHING can happen.

LGBTQ Prisoners Are Routinely Targeted For Beatings, Rape, And Harassment, Report Finds - Just because some folks are in correctional facilities does not forget we don't forget them. Justice for all.

Court upholds reprimand for airman who opposed gay wedding - This article highlights that often times when anti-gay groups bring up anecdotal stories of attacks on "religious liberty," they never tell us the entire story.

Ted Cruz Welcomes The Endorsement Of Anti-Gay Hate Group Official And Radio Host Sandy Rios - Basic politeness keeps me from commenting on this one. . .